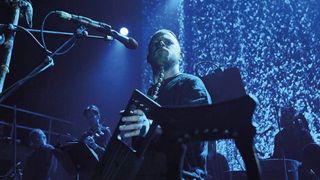 A three-day showcase of Nordic music and culture, London By Norse has been constructed around a three-part performance by progressive Viking metal institution Enslaved, celebrating their 25th anniversary by visiting the various musical incarnations of this ever-evolving entity.

The first night takes us to The Dome in Tufnell Park for a celebration of the band’s earliest (and of course heaviest) years. The show is opened by Vulture Industries, who actually err more toward the progressiveness of Enslaved’s later years, while throwing in a heavy dose of theatricality into proceedings to boot. Eccentric and expressive, they provide a compelling and sometimes even bewildering display, making the raw bombast of Enslaved’s black metal assault all the more pronounced. If the crowd seems a touch reserved at first, both the band and audience warm up dramatically, as well they might given the stirring qualities of the band’s ferocious yet early compositions, with classic numbers drawn from as far back as debut album Vikingligr Veldi and even the 1993 EP Hordanes Land. It is a fearsome introduction to the festival that displays the black metal roots of not only Enslaved, but arguably every act appearing at London By Norse.

Day two begins with an afternoon event at The Forge in Camden, a modern venue with a suitably arty and intimate vibe. Things get off to a strong start with a performance by Ivar Bjørnson’s BardSpec – essentially a solo project by the Enslaved guitarist. Unsurprisingly, the crowd is unsure what to expect as he takes the stage with just a few instruments and pedals for company. The resulting sound – accompanied by a video piece featuring a monochromatic acrobatic display – is a bit of a shock to some here, but the rhythmic and industrially leaning hypnotic ambience is immersive and atmospheric. A well-received, perceptive and pleasingly candid documentary on the central musicians involved in the event – created by none other than Hammer’s parent company, TeamRock – sets the scene for a talk and demonstration by Einar Selvik, whose knowledge and passion on Norse history and instruments is as inspiring as his acoustic renditions of Wardruna material.

Opening proceedings at the Underworld are Bergen’s Viking/folk black metal veterans Helheim. This diverse outfit are ideal companions to Enslaved and their highly charged attack resonates with the sold-out rowd. In many ways, this show is the pinnacle of Enslaved’s contribution to the festival. Perhaps it’s because they’re playing mid- period classics from albums such as Isa and Ruun – an era that acts as a bridge between the various strands that make up the band’s varied audience – but just as likely it’s due to the fact that both band and crowd are firing on all cylinders from start to finish, making for a triumphant, celebratory atmosphere.

The final day sees a visit to the the Coronet in Elephant & Castle – an unusual venue that blends a grand and decent-sounding concert hall with a semi-exposed railway arch setting. It is out in one of the arches that a collection of paintings by Kristian Espedal – better known to most as Gaahl – is being exhibited. Once of course a highly visible member of Wardruna, tonight he is attending solely in his capacity as a painter, an area for which he is gathering considerable respect thanks to the haunting and melancholic nature of his works. Wardruna themselves are of course also present, and tonight they offer up one of their best performances in recent years. Before tonight, their sole appearance on these shores was at the South Bank’s Queen Elizabeth Hall, but there’s something about this more informal setting that allows for a more intense form of communion. Such is the burning honesty and emotion of the performance that for much of the rapt crowd, for whom the band are clearly the night’s main draw, it’s akin to to a spritual experience. A startling synergy of raw and organic emotional expression and carefully constructed arrangements, Wardruna’s music marries the primal and the cerebral, and it’s certainly a potent combination tonight.

The final chapter of Enslaved’s metal pilgrimage celebrates the psychedelic textures of their most recent work. It’s a reminder of the powerful and complex beast the band has grown into, their ability to weave heartfelt and atmospheric works despite unapologetically progressive leanings that are all but unparalleled. Wardruna, however, are a hard band to follow, and at first Enslaved sound as if they’re trying too hard to fill the dimensions of the venue. But by the time the billowing, open-ended rapture of Ethica Odini and a closing One Thousand Years Of Rain irrigates Grutle Kjellson’s granite rasp with lush, progressive textures, it’s clear that Enslaved’s journey is one whose compass is still set at some point past the horizon.

Bringing the festival to a conclusion is Skuggsjá, the collaboration between Ivar Bjørnson and Einar Selvik that also features contributions from members of Enslaved and Wardruna tonight. The background for this meeting of minds was a commission to write a concert piece for the 200th anniversary of the Norwegian Constitution, but with a full-length album now under their belts, the project has grown into something seemingly more permanent. At first glance the music seems to qualify as the logical predicted result (i.e. Enslaved meets Wardruna, essentially a heavier take on the ritualistic magic of the latter). But tonight proves there is far more to it than that. Though certainly bearing a similar tone to Wardruna in parts, the interplay between the primal rhythms and traditional and the more familiar ‘metal’ instrumentation allows the musicians to weave an undeniably rousing spell. Only the most cynical could not feel moved as the assembled musicians take their final bow.

It’s a reassuring sign of the times that London By Norse has not only taken place, but that’s also proved to be an unmitigated success. A notable landmark in terms of celebrating not only esoteric music, but the art and philosophies that surround them, let’s hope that it inspires more festivals in this country to consider including exhibitions and workshops rather than only concerning themselves with which bands are on the bill.

SKUGGSJÁ IS AVAILABLE NOW VIA SEASON OF MIST