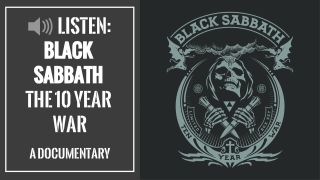 Feared, ignored, derided – the first 10 years of Black Sabbath saw the band’s meteoric rise matched only by the feeling of anitpathy from the music press. As the band release The Ten Year War boxset, this hour long special looks at Sabbath’s inexorable rise in spite of their detractors.

Presented by former Metal Hammer Editor Alexander Milas and with contributions from Black Sabbath sound engineer Tom Allom, acclaimed artist Shepard Fairey and critic and biographer Patrick Humphries, The 10 Year War looks at how Black Sabbath might have lost those early battles, but went on to win the war.

TeamRock+ members can click the link below to play the show. If you can’t see the show you’re either not signed in or not a member. Sign up to TeamRock+ to receive digital copies of your favourite rock magazines, access to our online archive, exclusive audio, ad-free browsing and much more. It’s quick and easy.