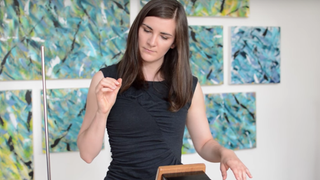 The inventor of the theremin, a Russian fellow who was coincidentally called Léon Theremin, must have hated touching guitars. After all, the tightly-wound nickel or steel strings must be a holiday camp for germs. So that’s why he probably came up with the idea to make an instrument which sounds like a frightened ghost. 1928 must have been a boring year, clearly.

So while it’s fun to put a theremin near an old cat and watch them try to make sense of the world, some adults have taken to playing the theremin very seriously.

Take Carolina Eyck, for example. The German-born musician is regarded as something of a genius on the theremin. She’s performed with the Berlin Philharmonic and is regularly invited to perform at festivals across the world. That’s the type of festival wear you dress up and sit down, rather than the gatherings where you battle the elements and eat chow mein from a foil box.

This week, the theremin virtuoso – we prefer ‘air guitarist’ – posted a video of her performing Jimmy Page’s guitar solo from Led Zeppelin’s 1971 song Stairway To Heaven.

We don’t know how she does it. She just stands near something that looks like a fancy Scandanavian lamp and gently throttles the air around it, like some sort of sorceress. Look, she wrote a book called The Art of Playing the Theremin, so she clearly knows her onions.

Led Zeppelin: a timeline of the Stairway To Heaven trial