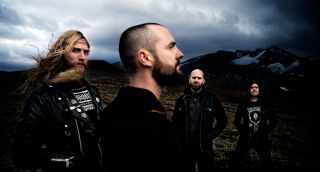 Hailing from the creative hothouse - well, wethouse if you’re aiming for meteorological accuracy - that is Bergen, Krakow have journeyed far beyond the generic gravity well and into the far reaches of sonic endeavour only those with a well-honed internal compass could ever navigate.

Having charted three full-length albums and numerous EPs over the past 13 years, the four-piece are due to map out a new and yet more jaw-dropping realm with the release of new album, Minus, due to ping out of hyperspace on August 31 at the behest of Karisma Records.

We are pretty damned thrilled to offer a first glimpse in the form of a spectacular animated video for the first single, Black Wandering Sun. Musically paying tribute to Krakow’s heroes - featuring none other than Phil Campbell of Motörhead fame - through unbounded wanderlust, it features a badass space wanderer battling black holes, alien brutes and asteroid belts amidst a backdrop of psychedelic nebulae and general interstellar detritus.

“Black Wandering Sun is an homage to our heroes who passed during the last couple of years,” says drummer Ask, “pulling inspiration from their universe, tipping the hat to their words and visiting them as the stars they are. And to top it off we were helped out by Phil who did the most rock’n'roll solo to provide the glitz and stardom the song needed to reach the summit of heaviness. The video is a reflection of the story the song tells, yet it becomes its own story, like a parallel trail through the universe, much like everything else that's going on with this album. Godspeed, you Starman!”

So without further ado, strap yourself in, flick an array of switches and turbo-boost your brain to Black Wandering Sun below!

And pre-order Minus here!