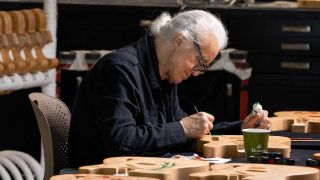 Back in 2016, Classic Rock crowned Jimmy Page's solo on Led Zeppelin's Stairway To Heaven as the greatest of all time.

By now, you should also know - cos we've told you often enough - that the axe Pagey brandished during that brief burst of pentatonic genius was his 'Dragon' guitar, a hand-painted 1959 Fender Telecaster, not the Les Paul that became his trademark.

And now Jimmy has rebuilt that guitar, working with the Fender Custom Shop to produce a reproduction so accurate Page describes it a "one hundred and ten percent right". And you can buy one.

"I was part of a whole generation of people who were seduced by the sounds of rock’n’roll through their radios. We heard this wild music – whether it was Little Richard or Elvis Presley, or even big band stuff, but certainly [a] more rockabilly side of it.

"And I heard this guy called Lonnie Donegan, who was doing Lead Belly and Woody Guthrie-type music, but he had a sort of beat to it – and that was skiffle. Everybody seemed to really be enamoured by his performances because he was so passionate with the songs that he was doing, like Rock Island Line and Cumberland Gap.

"It was a door that gave many of the bands that started in the sixties access to the guitar. The first Fender I saw was on an album in the fifties, The ‘Chirping’ Crickets [by Buddy Holly And The Crickets]. I said: 'My God, what is that?'"

"The manager of The Yardbirds had actually asked me to join when Eric Clapton left. I said: “Well, I know somebody who’d be really good for this, and it’s Jeff Beck.”

So he went in there. I gave him the fuzz box I was using in the studio when he joined, and of course he went in there and did some amazing work. I’m still living with my parents at the time in Epsom. And I hear this roar, and I thought: 'What’s that?'

"I didn’t know it was a car, I just heard this thing roaring up. I looked out the window and saw that it was a blue Corvette Stingray outside. It’s Jeff. And Jeff’s coming out and he’s holding this guitar. He knocks on the door and he said: 'Here, this is yours, for getting me in The Yardbirds,' and he gave me the Telecaster that he’d been using.

"Obviously, I was really moved with that. Bit by bit I tried various ideas to make it feel like my own instrument. I started putting mirrors on it, so that it would be quite interesting in the light when I was playing it during concerts, and I could use it in an optical way with the lights to shine the mirrors on people while I was playing."

"The year 1968 is when The Yardbirds decide that they want to fold… I made a decision that I’m going to start my own band. I knew what way I was going to take it. I got to the point where I wanted to consecrate this guitar and really make it my own.

"So it becomes quite a psychedelic guitar – and that is just absolutely what the idea of it was. It’s absolutely freehand. I looked at the guitar and then started to work on it, I didn’t draw it out and paint it. It was just an inspired evening."

"By the time I’m doing Led Zeppelin I, there’s a whole landscape of guitarists that I’ve listened to – I wanted to have something that had the full breadth and depth of orchestras, through guitar music. I wanted all of it on that first album. I was going to throw everything I could do at that, because there was a great focus on guitar albums around that point, but I wanted to show [the guitar’s] total versatility with that magical Telecaster.

"In 1969 I go on tour, and I leave my Telecaster behind with somebody who made ceramics and was also a bit of an artist. He was going to look after my house, because I’d had a break-in there and I’d had a guitar stolen. So I went off and did the tour. And the tour was absolutely amazing, as you can imagine. All of the Led Zeppelin tours were just getting more and more and more immense.

"The popularity of the band was just at such incredible levels. Each year that we went back, it just got bigger and bigger and bigger. So I came back and thought: 'Oh, I’m so glad to be home.' Because I really enjoyed my home. My friend said: 'I’ve got a present for you.' I said: 'Oh, what’s that?' I figured it was going to be a bit of ceramics. He said: 'A guitar!'

"I looked at the guitar, and I didn’t for one moment think it was mine. It was a Telecaster, but it had been painted with all these modulating lines, with very earthy colours, all over it. I said: 'Where’s my guitar?' He said: 'That’s it. That’s my present – I repainted your guitar for you.' I didn’t open the case. I didn’t wanna see it. Now, I would probably smash the guitar over his head, but as it was I was still so vibed out from the tour that the whole thing didn’t really fully connect."

"[In 2018] I came to the point where I thought the artwork should be recreated. I just wanted to put the guitar back as it was, to give it some TLC and bring it back to life and use it again. I was very keen to make a point of the fact that this guitar was painted.

"Then we started researching it, getting all the colour photographs. And it was really interesting, because the guitar started playing tricks on me. In all of the colour illustrations that we managed to acquire, the colours changed in each photo, because there were lights going on and all the rest.

"But of course I remembered the way it was originally approached, with the colour opposites, and what the colours were, so I could really get it right… But I said: 'I can’t do it without Fender. It’s a Fender guitar!’

"So we had our prototype, and we sent it over to the [Fender] Custom Shop in California. I asked them to send back the version they had done. It arrived, and I opened up the thing, and I thought: 'Oh my goodness gracious, they’ve really got it a hundred and ten per cent right. It’s so absolutely as it is, as it should be, and as it was.'

"I thought: 'Well, I’ve got our prototype here.' Because that prototype was actually the body of the original guitar. So that was great. [My idea was] to be able to have this guitar so that it would travel beyond what it originally was – as part of my ownership, if you like – so that it could then travel and other people could have it, in an edition that would be more available as well for [more] people. Because the guitar’s more important than I am at this point.

The Dragon Telecaster is available from the Fender Custom Shop.