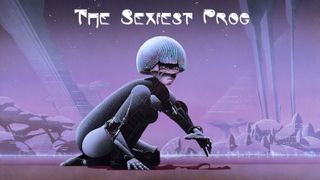 Prog and sex? Sex and prog? Whichever way you think about it, they’ve never been the easiest of bedfellows (pun intended). Whether it’s the fact that the original musicians were largely, at the time, oddly bearded men with a predilection for brown corduroy or with a penchant for crawling out of penis-shaped tubes while dressed in a costume covered in genitalia.

Hardly the most titillating fare. These days, of course, prog has got well sexed up with the proliferation of scantily clad females fronting acts such as Touchstone, Mostly Autumn, The Reasoning, Panic Room and beyond. But what about the actual music? Here’s ten prog songs were sex is certainly in the air. Somewhere…

Not only did Curved Air feature the delectable Sonja Kristina as frontwoman, arguably progressive music’s first female “pin-up”, but the band’s first ever hit, taken from 1971’s Second Album, was tale of burning passion in a back alley. “When I was 15, I used to skip off school and one day noticed a blond man standing on the steps at the local snooker hall. I became fascinated with him, and ended up chasing and seducing him,” Kristina told Prog magazine. Not Close To The Edge then

Taken from the band’s bonkers concept album about the revelations of St. John, 666, which was released in1972, after the band split up, this song is essentially the sound of an orgasm. Greek actress Irene Papas, who starred in films like The Guns Of Navarone and Zorba The Greek supplied the breathless female incantation of “I was, I am, I am to come” over and over again as the music reaches its own climax. Keyboard player Vangelis described the song as conveying “the joy of intercourse”. In essence, prog’s version of Je t’aime… moi non plus.

Genesis – I Know What I Like (In Your Wardrobe)

Taken from the band’s 1973 album Selling England By The Pound, on the face of it, this tale of a lowly groundsman, happy with his lot mowing the lawn and not wanting to grow up, might not seem overtly sexual in itself. And of course it’s not. But Genesis guitarist Mike Rutherford told this writer that when this song became an unlikely hit for the band, reaching number 21 in April 1974, all of a sudden, girls began showing up at Genesis concerts. A genuine breakthrough for the band, and opening up a whole new world of opportunities no doubt…

It was inevitable that the sultry smooth art rock of Roxy Music would find its way into a sexy prog songs list. But not, perhaps, as one light have thought, from the band’s laid back lounge lizard days of the late 70s and early 80s. Amazona, from the band’s 1973 album Stranded mixes the ambiguous art rock approach of the band’s early years with a raw, basic blues thrust, which was inspired by Bo Diddley. A more primal sexuality than a lot of their work, but still in keeping with those er, tasteful, female clad album covers.

They appeared dressed like the Bee Gees on the cover for 1979’s largely derided Love Beach album, but Emerson, Lake & Palmer were hardly what you might call sex symbols. Pleasures of the flesh were, however, clearly not far from their minds, with Lake singing “Down on your knees, facing the wall, Saying please please please” from Love Beach’s Taste Of My Love. However we’ve opted for Brain Salad Surgery, itself a euphemism for fellatio. Not only did the album boast Still… You Turn Me On, but in the rampaging epic Karn Evil 9, a song actually about futuristic conflict, it does boast the eye-opening line “Performing on a stool we’ve a sight to make you drool, Seven virgins and a mule, keep it cool, keep it cool…”. Then again, this did come from an album where cover artist H.R. Giger inserted an evident phallic image in the throat of his wife, the model for the woman on the cover, forcing one label exec to ask if the artwork could be made “less penisy”!

It was inevitable that the repetitive beats and motorische approach of the Krautrock bands would eventually find themselves coupled with the urgency of sexual intercourse, and so it arrived on Can’s classic 1971 album Tago Mago, in particular the 18-minute long Hallelluwah, which features drummer Jaki Leibezeit hammering out a relentlessly propulsive beat that essentially comes across like one epic rampaging session of copulation. Hammering it home, one might say!

Where do yo start? Penned when she was a mere 18-years old having devoured Emily Bronte’s novel of the same name, this was the song that introduced the world to Kate Bush. It’s the sound of a thousand teenage boy’s jaws hitting the floor in bedrooms around the world, and the beginning of a million unrequited love affairs, especially when they saw her perform it on video, replete with the similar soft focus lighting they were used to on those videos they used to borrow from the bottom of dad’s wardrobe. Or was that just me?

Put simply, this track, taken from Zappa’s 1979 album Sheik Yerbouti is all about sex – or at least from Zappa’s unique perspective. The tale of the titular “cutest boy in town”, who following a sexual encounter with a lesbian, questions his own sexuality, turning from wealthy student to depraved homosexual in under three minutes!

Yes – Owner Of A Lonely Heart

By 1981 Yes were deemed washed up and irrelevant, as were many of their prog peers. Jon Anderson and Rick Wakeman had been replaced by The Buggles of all people in an experiment that had failed. By 1983, Yes were at Number One in the US singles charts and back with a vengeance with a new tech prog rock sound and 80s makeover. And with a video all over MTV, suddenly these progenitors of boring old prog were deemed sexy and relevant all over again, winning a new audience who, much to the horror of their original fans, wouldn’t know a Siberian Khatru if it bit them on the arse!

In which alleged Genesis wannabes from the quaint and pastoral English countryside found themselves at Number Two in the Uk singles charts and essentially saved their career, with the resultant Misplaced Childhood album reaching top spot in the album charts. Essentially, Kayleigh is a sweet ballad with singer Fish conveying his regret at past relationship failures, although it was named after his most recent girlfriend. Nothing spectacularly sexy in that, you might think? Not until the band performed the song on TV show Wogan on May 20, 1985, the song culminating with Fish giving a shy smile to the camera. “That little smile broke every mother’s heart in Great Britain,” EMI’s then head of promotion told the singer afterwards. And he was right. Bingo!

The 10 Sexiest Rock Songs Ever