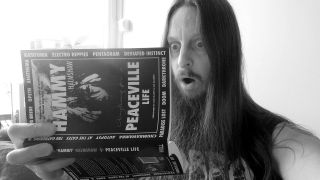 Back in 1992, Peaceville Records, known for signing bands such as My Dying Bride and Autopsy, almost turned down releasing an album from a few black-clad, heavy metal obsessed lads from Norway. That record was A Blaze In The Northern Sky by Darkthrone, an album that would define the very aesthetic of black metal.

In his book, the previously out of print (Anything For A) Peaceville Life (due to be re-released on August 10) founder Hammy retells the journey of Peaceville Records, from its humble D.I.Y. punk rock beginnings to one of the most significant labels in heavy music – and his first reaction to receiving that now iconic record.

Take an exclusive peek inside and read about that fateful moment below:

A great deal has already been written about the first album we released this year. Darkthrone’s ‘A Blaze In The Northern Sky’. We were riding on a high for once, sales wise. Paradise Lost’s ‘Gothic’, Autopsy’s ‘Mental Funeral’, My Dying Bride’s ‘Symphonaire...’ were all doing superbly. We were being feted by all of our distributors and the press likewise. It felt like we had most definitely become a happening label.

We weren’t overly in touch with all of the bands on a regular basis. There was no widely available internet or cellphone still at that point. Letters took a week or so to get to Norway. Landline calls cost quite a lot of money, and not everyone had a landline. It’s amazing anything ever got done.

Things would arrive in the post unannounced, and you just had to deal with whatever landed in the best way possible. When ABITNS arrived with a little black and white photo for the artwork – it seemed like a joke. I was waiting for the TV presenter to come in and tell me it was all some prank. You have to remember that we didn’t have the luxury of hindsight and there was no black metal scene, discounting one shop in Oslo.

It honestly seemed like the band had lost the plot. I’ve always been very open-minded, musically, but I wasn’t up to speed with Norway’s sudden explosion/implosion. I didn’t think too long and hard about it, I just questioned it. The last thing I wanted was for them to fuck themselves over and come back a year later with their proverbial tails between their legs. There was a lot of expectation with the label and it was my job to question the quality and presentation of releases. Especially when we were doing so well.

I wrote to the band and asked them to consider re-recording the album, or at the very least re-mixing it. Or I would. It didn’t go down well, they flatly refused to do anything to it, other than take it to another label, (the one run by their friend Øystein ‘Euronymous’ Aarseth) Deathlike Silence Productions.

Fenriz: “At the time we would have been happy to have ABITNS released on Deathlike Silence Productions because it was the only label knowing what was going on in the black metal underground. In hindsight it would have been bad for both Darkthrone and Peaceville, I reckon. We just didn’t want anyone tampering with the sound of what had been a major life changing direction for the band, a change that got this reaction from Peaceville: ‘This is not the sound we signed you guys for.’ It was a ridiculous threat, but in hindsight understandable. That’s why I offered to withdraw from the label.”

Leaving the label wasn’t an option. Relations with Gylve, however, were getting strained for sure. We started to receive calls each week from him – goading us, or downright insulting us. I’d always assumed that he had finished work early, because we had understood that he worked as a postman and had gone and got drunk, then called us up to sound off. I remember him once saying something along the lines of “You typically stupid fucking English people, always getting it wrong”.

Fenriz: “I have vivid recollections of this. I was not working for the Post Office, as your patronising tone seems to infer. I was working at the Postgiro, the Norwegian Postal bank and there was no getting off work early. So I couldn’t have been that drunk. However you are right in your suspicion that I had been drinking as I would eat a dinner after work in the canteen and then go to Elm Street Rock Cafe and drink beers for a while. Office hours at Peaceville closed soon afterwards, so logically the timing would suggest me drinking around four beers before getting a hold of you (after all, I came home at 19:00 and you would still be in the office, because of the time difference). I would call and be angry at, what to you were tiny mistakes but to me were enormous mistakes. I am an angry man and I also want to be conveyed correctly. So when this failed to happen over a period of time, it created extreme frustration.”

I was wrong about the album. It went on to become a classic. It still may have been different though had things not transpired in the way that they did…

Continued in (Anything For A) Peaceville Life - Extended Edition, signed by Hammy himself is available to order from Crypt Publications and Cult Never Dies publishing here, as well as all good book and heavy metal shops.