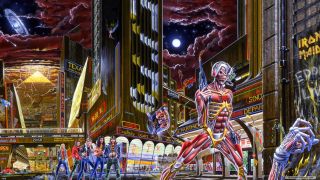 NWOBHM legends Iron Maiden released their album Somewhere In Time on this day in 1986. It’s one of their most intricately detailed album covers and layered with many in-jokes and nods to their past.

“It wore me out quite severely,” Riggs revealed in Martin Popoff’s book Run For Cover: The Art Of Derek Riggs. “I was living in London at the time, and working on that for two months, and it took three months in all – I just had to stop, because I had had enough. It got into my head and I just couldn’t see anything else. I couldn’t think about anything else. It did my head in, because there’re all these little details.”

1) Riggs’ stylised signature can be seen as a badge on Eddie’s chest.

2) Eddie is posed next to a street sign which partially reads Acacia. We can only assume it’s a reference to The Number Of The Beast song 22 Acacia Avenue.

4) To the left of Eddie’s gun, there’s an Eye Of Horus placed at the top of a skyscraper. This ancient Egyptian protection symbol is mentioned in the title track of 1984’s Powerslave.

5) Behind Eddie’s right leg, reflected in the window of the Bradbury Towers Hotel International, there’s a sign that reads ‘This is a very boring painting’. Speak for yourself, there’s plenty of references to go.

6) The biohazard sign on Eddie’s crotch? “He’s got a nuclear-powered willy,” says Riggs. Quite.

7) Next to Eddie’s left leg, there’s a plastic yellow bin fixed to a lamppost, referencing the cover of Iron Maiden’s self-titled debut album.

8) Aw. Who’s this? It’s the black cat from the Live After Death artwork. Name unknown.

10) Hungry? There’s a Pizza Hot which can be seen through Eddie’s legs. “The Cyrillic above the words Pizza Hot? I think it says sour milk in Russian,” remembers Riggs. The perfect drink to wash down a Meat Feast.

BACK COVER – SECTION ONE

1) Fancy a pint before jumping in the cockpit and starting up the engines? Try the Aces High Bar.

2) There’s a spitfire from the single cover twisting overhead.

3) In the skies beyond the city, all you can see are pyramids. That’s all to do with Powerslave.

4) L’Amours was a Brooklyn venue which Maiden played often. They returned to play a secret show in 1988 under the name Charlotte and The Harlots.

1) Long Beach Arena is where Maiden recorded Live After Death.

2) Hammerjacks is a Baltimore nightclub they used to visit.

3) Below Hammerjacks reads a sign for Tehe’s Bar, where the gang vocals for Heaven Can Wait were recorded.

4) The angel plummeting down the side of Bradbury Towers is Icarus. Still not having much luck there. It’s not even sunny this time. It’s also a nod to Led Zeppelin.

2) See the sign saying Sand Dune over the bridge? That’s in reference to To Tame A Land, from 1983’s Piece Of Mind album, which was based on Frank Herbert’s novel Dune.

3) The band called up the author to ask his permission to name the song after the book. His reply? “No, you can’t call it Dune. And you can’t do anything based on my book, because I think rock ‘n’ roll is decadent and corrupt”, remembers Riggs. “So they put Herbert Ails [on the bridge], as in, Herbert’s not very well.”

4) Next to that is a sign for the Marquee Club, which looks bigger than the original venue in London.

6) The Ruskin Arms was an East End pub where Maiden cut their teeth.

7) Above the pub, there’s a prostitute in a red room. That’s probably Charlotte The Harlot, still on the game after all those years. Good grief.

8) On the bridge across the road, there’s a digital clock reading 23:58. Two minutes to midnight. See?

9) ‘The Philip K. Dick Cinema’ is a nod to the author whose book Do Androids Dream of Electric Sheep? inspired the film Blade Runner.

10) That’ll explain the Dekkers Department Stores and Tyrell Corp signs in the background.

11) Asimov Foundation is a nod to the sci-fi writer Isaac Asimov.

12) There’s the Grim Reaper from the Live After Death and The Trooper artwork.

13) The Phantom Opera House refers to the band’s song and one-time Lucozade soundtrack Phantom of the Opera.

14) Another West Ham reference on the bridge. According to the scoreboard, the Hammers appear to have given Arsenal a spanking. As we said, this is the future and all just fantasy.

15) Down the road, there’s a neon sign saying that Gypsy’s Kiss are performing that evening. They were Steve Harris’ first band. It’s also Cockney rhyming slang for piss.

1) Fancy a fish dish that takes around 14 minutes to prepare? Head to the Ancient Mariner Seafood Restaurant.

2) Bradbury Towers can be found on Upton Park, once the home of Steve Harris’ beloved football team West Ham United.

3) Under the Bradbury Towers sign reads ‘Maggie’s Revenge’, the now-dead Tory Prime Minister whose nickname was ‘The Iron Maiden’. She fucking loved her metal.

4) Batman can be seen lurking in the shadows on the bridge.

6) Bruce Dickinson is holding a brain, a reference to the band’s 1983 album Piece Of Mind.