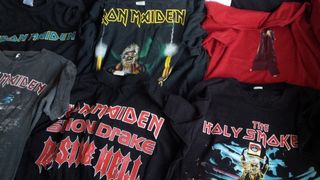 Iron Maiden T-shirts… Chateau Ling is full to the rafters with ‘em, of all descriptions, shapes, arm-lengths and colours. I own so many of the buggers that when I leave the place my friends have been known to set up sweepstakes predicting which of the band’s many tours I will be celebrating. Here are my dozen all-time favourites. And no, despite the fact that a new tour was announced today, I don’t want to sell any of them.

Another classic from the Beast On The Road tour. Maiden jetted in from a US tour to headline the Saturday night of the Reading Festival in 1982 with an impressive cast that included special guests Blackfoot, before turning tail and flying back out again. That’s why the back says: ‘Aug 19, El Paso Texas, Aug 28 Reading Eng and Sept 3, Long Beach CA’.

A promotional shirt for Can I Play With Madness, the single from the album Seventh Son Of A Seventh Son. I’ve no idea how this one came into my possession, but it’s kinda cool in a simplistic, retro way. I might wear it to the O2 Arena next May!

Again, details of how this became a part of the collection are somewhat foggy – something to do with the band’s headline spot at Monsters Of Rock in Donington Park – watched by a record crowd of 107,000 people, presumably. If I picked it up on that night then it’s amazing that it got home intact given the sheer number of bottles of Eddie’s Evil Brew – a Maiden-branded wine – that were consumed post-show. Blimey, it was potent stuff… how about reviving EEB, Rod… some of us can’t stand bitter?!

Maiden warmed up for their No Prayer For The Dying tour with a secret gig as the Holy Smokers at the Woughton Centre in Milton Keynes. It must have been guitarist Janick Gers’ first gig as a member of the band.

On August 28, Bruce Dickinson departed the band almost literally in a puff of smoke via Raising Hell, a slightly bizarre televised show that co-starred Simon Drake. The British illusionist ended up ‘killing’ Bruce and amputating Dave Murray’s hands. Some members of the crowd and road crew also appeared in the pay-per-view special, brutally ‘murdered’ by Drake. Alas, all I got from my trip to Pinewood Studios was this lousy T-shirt.

Bruce was back in Maiden and everything was hunky dory again. Metal Hammer asked me to spend a few days on the road with the band Stateside, travelling with them in a small plane piloted by Mr Dickinson himself. We were in Detroit, I think, when, in a fit of uncharacteristic generosity, Rod Smallwood thrust a handful of T-shirts into my grateful mitts. The Trooper is among my fave Maiden tracks (I was there at Brixton Academy when its original promo was filmed), so this one became instantly cherished.

Another from the batch donated so kindly that day by Mr Smallwood. The gigantic Eddie figure is so imposing, and the back-print has a plain Iron Maiden logo in blue, embossed in yellow. Sometimes simple is best.

The reverse of this one says it all: ‘I survived 9.9.99’. I took my now ex-wife and our then-toddler Eddie to Paris for the weekend and snuck off to see Maiden and Megadeth at the Palais Omnisports, getting so wasted at the after-show party that I couldn’t find our hotel till 5am, falling asleep at the end of the bed with trousers at half-mast. It can’t have been the prettiest of sights to wake up to. Come daylight, the ex-missus took great delight in my pain as I was (frog-)marched around Paris on sightseeing duty. The show was great, though!

This was a promo shirt for the band’s Dance Of Death album. I like it because it’s among the least obvious of my Iron Maiden garments. Not an Eddie The ’Ead in sight! Great to wear to weddings and christenings.

Another promo for Dance Of Death, with Eddie as the grim reaper on the front, accompanied by a simple: “You dancin’?” Great stuff… and it’s red. To any merchandisers that might be reading this: please can we have more red T-shirts? Black is so boring, doncha think?

Yet another promo shirt, this time for the album A Matter Of Life And Death. The artwork, like the record, is so iconic. And, of course, just like Maiden themselves.

Iron Maiden’s merchandise stall will be open again in April, as the band embark on The Book Of Souls European Tour 2017.