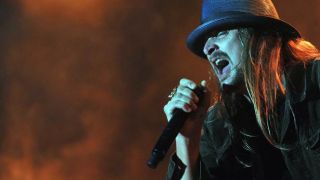 All he ever expected “was to cut a few records, make a little money, be able to have a taste of rock’n’roll. To have it work out the way it did, I’d say I’m pretty fortunate.” So says Robert James Richie, better known to us as Kid Rock, multi-platinum-selling raprocker whose albums Devil Without A Cause and Cocky – and later failed marriage to Pamela Anderson – have made him a superstar in his native US. Europe remained less convinced, not least when he took a more country rock route for 2003’s Kid Rock. The UK may have been wary but, as he proves below, he’s not short of friends.

We met when we were doing festivals in Europe years ago. Lars came on the bus to meet me and hang out. They’re really good guys.

I remember me and Lars on snowmobiles one New Year’s Eve a few years ago, no shirts on, shit-faced, driving through a pasture. Me telling Hetfield this story, and him sitting me down and telling me to be careful, cos we’ll do this and crash through a fence and Lars’ll be fine and I’ll die, cos that’s the karma Lars has around him. And every time me and Hetfield go out… We went wakeboarding and he fucked his back up. He came over to my house to ride motorcycles – I wasn’t even there – and he hit a fence and knocked himself out. [After which Kid Rock deputised for Hetfield in Metallica for a few gigs.] So for him I reckon I’m the bad karma.

We were playing with Metallica back in the day. They were on stage, and this chick gets wild in my trailer and she’s naked and she’s blowing everyone. I’m sat there like: “This is rock’n’roll” [leans back in his chair with a smug look on his face]. There’s a knock at the door and it’s Scott Stapp with a video camera. He’s like: “What’s going on here?” And I’m like: “Whaddya mean, what’s going on here?” And he asked if I minded if he got in on it. I’m like: “Nah, of course I don’t mind, man. Come in, take your pants off. Have a beer.” And then I’m like: “Aren’t you in a religious band?” But I was just trying to be a friend to him. He just seemed a little lost. I just figured if he hung around with a big dog he wouldn’t piss like a puppy.

I think I said to him: “What’s with the camera?” And you just know that thing’s coming out one day. The thing is, if it did – and it almost did – I’d be a fucking hero; it would ruin his career.

We’ve shattered just about every outdoor beer sales record in America. Do Skynyrd still enjoy a party? Well… er… they’ve had some issues and I don’t want to… We share the same management. I’m gonna plead the Fifth.

I remember the first time I met Axl it was me and Lars hanging out at Bungalow 8 in New York. And then in comes Axl and then Lenny Kravitz, and we just kind of had this meeting of minds at the table. Lenny left, and it was me, Lars and Axl sat at the table till about 11 in the morning, solving the world’s problems. I really liked Axl. He asked me if I wanted to sing with them, and I did. He was staying in town and we tore up the town for a few days. It was fun.

I always give someone the respect they deserve. To me Axl is one of the greatest rock singers on this planet. And I’ve sung with him and he still is. A great fuckin’ songwriter. And I give him that respect every time I see him.

I toured with Ice Cube in… I think it was 1989. The Straight From The Underground tour. It was a whole load of rappers – Ice Cube, Too Short, Yo-Yo, The Ghetto Boys, D-Nice – and me. I had a ball. It was like I was the team mascot. I learned how to play dominoes and shoot dice, and I was such a little white kid in that sense. I was running round in my skate shoes and Ice Cube’d be like: “I like your T-shirt, boy.” We just hung out shooting bottle rockets off the roofs of hotels, smoking pot and trying to get girls. Ice Cube’s a cool, down-to-earth nice guy.

I haven’t seen him in years. We got fucked up one night and ended up on the Howard Stern show. I think we were just fucking around trying to order hookers, and the girls that kept coming to the door were too fat. We were like: “No…”

He’s a smart business guy. He’d heard my record, Devil Without A Cause, earlier and called me up. I thought they were calling because they liked my record and wanted to be my friend, but really they wanted me to open their tour for them. We had some good times together, me and Limp Bizkit.

I love Howard. I got pretty friendly with him over the years. We had to pull teeth to get on that show. Once he got to know me we were always on the show. I always go on when I’m around. But he doesn’t hang out too much outside of the radio show. He comes out now and then, and when he does he’s real good fun.

I met him on a Willie Nelson show. We did Whole Lotta Shakin’ Goin’ On with him on piano, Willie Nelson, Keith Richards and Merle Haggard as the backing band. One of those very surreal moments. He’s the real deal. You’re not fucking around with Jerry Lee Lewis, you’re not going to disrespect him, you’re not telling him what to do. Learn that rule and you’re gonna get along real fine with Jerry Lee.

We’re friends again now. We first met back when everyone was calling me up trying to get me to tour with them. I thought we were friends, but I felt kind of used after the whole thing. He got me to work with him on his Methods Of Mayhem record, and it came to the point where he didn’t even show up to do that record. And then he was gonna be in my video, and I’m getting phone calls from him saying: “Oh, man, there’s traffic and I don’t think I’m gonna make it up there.” Fuck that, man. That’s fucked up. But yeah, we were kind of friends though.

He was pretty pissed when I started seeing Pamela [Anderson]. When we started hanging out I called him on the phone to say that I’d started seeing her, and he had a shit fit. They weren’t even going out. I was just trying to be cool, like a friend.

We say hello. But I touched the stove and it was fucking hot. I don’t think I’m going to touch the stove any more.

He invited me to be in a video for his song Naked Women And Beer [from 1999’s Stormy], so I went straight down to Tennessee to shoot it because he’s one of my heroes. He’s one of those people you meet who becomes like the best friend you ever had.

I remember when I met him I had this KR ring on, and I had some others on too. He comes on the bus and he looks at me and says: “You like that flash-ass gold shit on, Confederate boy?” And I’m thinking: “Oh, man, I just walked on the bus and he’s tearing me up!” And he goes to the back of the bus and comes back and he’s got this huge HW ring on, and he says: “Me too!” Me and him have torn up pianos in bars. We’ve had some great times together.

I don’t wanna know that guy. He said some shit about me on a record [notably Not Everybody Likes Us, from 2006’s Straight To Hell, which included the lines: ‘Just so you know, so it’s set in stone, Kid Rock don’t come where I come from/Yeah it’s true he’s a Yank, but he ain’t no son of Hank, and if you think that you must be fuckin’ dumb’]. I’m not gonna give that kid the time of day. He’s got a quite a chip on his shoulder. It’s kind of weird, because I’m such good friends with his dad.