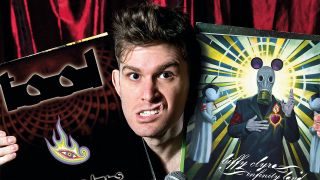 “I’ll be honest. I didn’t know a thing about music. My first album was Will Smith’s Big Willie Style and I loved it. Then in school there was a girl I really fancied called Holly Black. She was the person I first kissed, and she was properly into rock music and loved Green Day. Once I’d heard them, they were my gateway to lots of other stuff. It was the start of something big!

The next step was seeing bands live. My first ever gig was Skunk Anansie and Muse were supporting them. It was 1999, I must have been about 15 and we travelled from Bristol, to Cardiff University. In front of us were these people in Muse T-shirts and I remember thinking ‘Who the hell are Muse?’ and ‘What absolute idiots who really like the support band!’ In hindsight they were clearly right. At that time Muse were supporting nearly every band that was on tour and
they started to get big. They were totally different to what I was listening to, and didn’t have enough angst for me. But I got to see their evolution, I love what they do now. This band have really pushed things forward on every album, and with The 2nd Law they excelled themselves. It’s so far removed from the early days and that massive Queen influence. Muse are a perfect example of a rock band that you get into when you get older when you can understand that they’re incredible musicians, and that vocally you don’t have to scream to make yourself heard.

I say Muse weren’t angry enough for me; the problem with rock music is that I’m quite middle class and not necessarily angry enough to listen to it. Take the mosh pit, you’ve got to be angry in there. I’d see people whirling around, like, ‘arrrgghh I grew up on a council estate!’ and I’d be like, ‘arrgghh, my mum’s lasagne’s pretty good!’

Nu-metal came along and I got into Korn begrudgingly. I didn’t understand what they were doing, and its appeal crept up on me. But listening to what seemed impenetrable, eventually you hear the merits of it as you battle through the noise to get to the music. The same with Slipknot. I was a bit ‘whatever’ about them until I saw them live. They were so good, so many strands woven together, really mind-blowingly different. But aside from the incredible music, it was proper angsty stuff that I couldn’t quite grasp as the worst thing that could happen to me is when my mum didn’t give me a lift into town. At this point I was in a band called Psirus and we only played one gig at Thornbury Cricket Pavilion, just to contradict our anger. We started with Korn, played some of our own songs, and then finished with Papa Roach. Or didn’t, actually, as the guitarist refused as he said ‘his fingers hurt’. Pah.

From nu-metal I found Tool. Along with their intensity, they brought calm, spirituality and relaxation. The first album I got was the one everyone had, Lateralus. It was another step on from what I was listening to and their artwork and videos were amazing, especially the one for Schism. I was watching cable music TV all the time and the videos that came around that time were so brilliant, but quite disturbing. I wonder if they’d be able to play them now? Crazy, weird, really strange. Frontman James Maynard Keenan is also in A Perfect Circle and I liked them a lot too. They’re a bit more experimental, and their song Three Libras, I really love that.

At that point I was listening to a lot less frantic music, things to have a sit down and have a cup of cocoa to ha ha! When you’re young you listen to everyone else cos you don’t want to seem uncool. When you get older and more confident you can take some risks – “I’m allowed to like this!”, that kind of thing!

One band that demand proper listening to are Deftones. They have melody, then heaviness and a lot of beauty. Around The Fur started it for me, but they transcended the nu-metal genre easily with how they’ve used their influences – Cure, Radiohead, ambient music. Another is Coheed And Cambria. I got into Coheed quite late, on the Good Apollo, I’m Burning Star IV, Volume One album. I was looking for things to really listen to and it appealed to me because of the string work. Coheed was my way in to things with bigger arrangements and after I’d heard Keeping The Blade, they led me to the Finnish metal classical band Apocalyptica. Great stuff!

I’m a big Biffy Clyro fan. My friends were much cooler than I was and I would go round their houses and we’d share everything on our iPods, ending up with huge collections. So I heard Biffy right from the heavy early stuff. Puzzle emerged and they got really massive, and for all the right reasons. They’ve never played it straight. I find them really exciting and like Muse, or System Of A Down, there’s something really noble about an artist that keeps trying to switch it up. It’s very inspiring, bands that have aspired to do something different but have retained a level of things that were interesting to you in the first place. Biffy achieve that, and so do Cave In. I’ve never got into Rush, who they’re supposed to be influenced by, but Cave In started as a metalcore act, but never stood still. Antenna is the album they did with the big songs, big melodies, totally epic.

Listening to these artists and how they push the envelope is how I’ve learned to approach stand-up on tour; what was I doing before, let’s push it further and surprise the audience. It’s also such a big love of mine I can’t ignore it. So for my Edinburgh shows this year, I have an idea to go back to my music roots – it’ll be called Finding Emo, and I’m gonna try and reunite the band…”

This feature originally appeared in Prog 44.