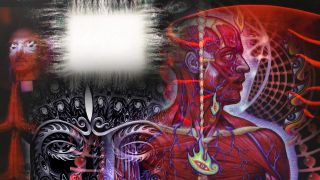 So Tool have finally relented and made their albums available on streaming services. And judging from this morning's response to our question asking what people are listening to, a lot of you are enjoying the band. But equally there's prog fans who are not so familiar with the band's output.

Now being massive fans of the band we've decided to help point you in the right direction with this primer list of some of the band's proggiest moments.

The band's back catalogue on Spotify starts with the 1992 EP Opiate, but given the band sprang from the grunge and alternative metal boom, there's maybe not a lot there, and even on the 1993 album Undertow for newbies of a prog persuasion to get into. Both are great releases, but for want of scaring off the more sensitive, we'll start by dipping into 1996's Ænima.

There's You Tube links for each song, or a Spotify playlist of it all at the end.

Mixing basic 4/4 timing with 7/8, the fifth track on Ænima deals with lyrical concepts that espouse Carl Jung and American mystic Drunvalo Melchizedek. It opens with Justin Chancellor's loose but mesmeric bass, building in slow fashion over repetitive guitar riffs into a big proggy groove. Amazingly it was released as a single.

Opening with drug-related clips from the late comedian Bill Hicks, the closing track from Ænima is a near fourteen-minute epic that helped point the way the band would move with later albums. Expansive, brooding, prone to occasional bursts of frenetic activity with a message about expanding the mind. The fact that producer Dave Bottrill had worked with King Crimson the year before on Thrak should not go unnoticed. The live version from the 2000 live album Salival (sadly not on streaming services) is held up to the best version.

Hypnotic bass lines, chanting vocals, crashing guitar crescendos. The Grudge opens 2001's Lateralus as a statement of proggy intent. By now Tool are far more about atmospheric soundscapes building into prog metal workouts. the abrasiveness of early albums has been replaced with a maturity and desire to explore musical boundaries.

The two tracks merge into one nine-minute prog rock work out. The opening Parabol featuring Maynard's chant-like vocals over a haunting musical backdrop, before the band crash in with Parabola, Adam Jones' guitar searing through the mix as the band lock into a super-tight progressive groove. Parabola was released as a single, with one of Jones' trademark videos to accompany it.

Drummer Danny Carey has said of the title track to Lateralus: "It was originally titled 9-8-7. For the time signatures. Then it turned out that 987 was the 16th number of the Fibonacci sequence So that was cool." Is that proggy enough for you? The nine-minute plus song mixes 9/8, 8/8 and 7/8 time signatures as the song implores humans to explore a deeper understanding of everything.

Although listed as three separate songs, this triptych towards the end op the album are meant to coalesce into one lengthy piece of music (running at over 20 minutes in total). Opening with the gentle, reflective Disposition before building into the epic centrepiece of Reflection which builds in slow fashion before bursting into life about eight minutes in. The more percussive Triad gradually brings things to a close. Possibly Tool's proggiest moment ever!

About as catchy and immediate as Tool get on 10,000 Days, opening track, and first single Vicarious is the closest connection to the band's past. Or in other words, all that was left of the alt. metal band of yore. It's hardly metal though, riding in on a  big fat prog groove as Maynard sings of the thrill for people of living through others in the media eye.

From the even proggier 10,000 Days, this epic two-parter is the sound of a band living out its fantasies, playing the long-form music so beloved of drummer Danny Carey (a prog fan from an early age), or a band disappearing up its own arse. Clearly, we favour the former. Typically haunting to open, and building to a fine rolling groove.

In keeping with the band's love of drug-related allegory, Rosetta Stoned imagines a man waking from a DMT trip encompassing aliens and his own spiritual awakening. The song uses a staggering array of time signatures; 4/4, 5/8, 5/4, 11/8, 3/4, and 6/4, and if that's not prog enough for you, we don't know what is!

Another of Tool's proggy couplets, these two songs joined at the end of 10,000 Days are about as reflective as the band get, displaying Tool's more ambient side on opener Intension before the more epic Right In Two breaks through with more trademark jarring rhythms, twisted time signatures and odd percussive breaks. A pointer to where Tool are headed with Fear Inoculum? We shall see...