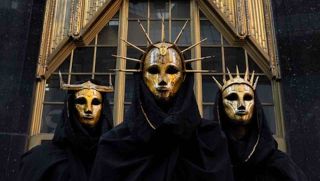 We’ve been getting unfeasibly excited by masked New Yorkers Imperial Triumphant and their head-spinning mix of extreme metal, avant garde noise, jazz freakouts and anything else they damn well care to throw in the mix.

Have we lost our marbles? Maybe. But Tomas Haake clearly agrees with us – the Meshuggah drummer has added extra firepower to brand new song City Swine, taken from the trio’s upcoming album Alphaville, which is out on July 31.

If that sounds like your kind of noise, you’re in luck. We’ve got the world exclusive premiere of City Swine, which you can check out below.

This fearsome racket might sound like hell’s own jazz-metal band chucking their instruments down a flight of stairs, but get past that and you’ll find some insane chops amid the sonic assault – check out Haake’s mid-song appearance on Japanese Taiko drums. And that title? We’ll let bassist Steve Blanco explain.

“In the depths of the big city lurking beneath the lowest forms is a wretched swine that can be of no use,” he says. “Laughing somewhere above is an equally wretched swine, that dumps on everything in its path. Both serve no purpose, are ineffective, and remain unprofitable in the eyes of the big machine.”

Yep, we were thinking pretty much the same thing ourselves. Do yourself a favour and check out the City Swine video for below for some seriously mind expanding noise.