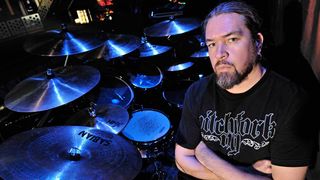 As drummer with tech-metal overlords Meshuggah, Tomas Haake does things on his kit that lesser sticksmen can’t even begin to dream about. But his own inspirations are much less high-falutin’.

“It’s hard to say what really influences me as a drummer,” he says. “In the early part of my life it wasn’t the technicality. That’s a very secondary aspect to me. Technicality is something you get into once you know the drums and you get into how you play them.”

Technical or not, these are the drummers who made Haake the musician he is today…

“People would look at someone like Phil Rudd and go ‘Oh, that’s easy!’ but I dare anyone to get up there and play drums in AC/DC like Phil Rudd. He has a unique sense of time, and a very good sense of time. So that would be one of the first ones who influenced me.”

“In the late 60’s, early 70’s drummers just didn’t sound like they do now. When Sabbath had their biggest impact I wasn’t old enough to truly appreciate the greatness of Geezer Butler and Bill Ward. What made them is something that I heard more evidently as I got older. But he had that free sense. Music now is very solid, but early Sabbath had this swing. You used to have to have a great drummer to be a great rock band in those days. Some people would say Bonham is the ultimate, but I would always say Bill Ward. When he let loose…”

“For the late 70s to early 80s he was my favourite drummer. I think he was peerless at that point. You just need to look at his back catalogue and the bands that he worked with - Rainbow and Dio and all of the great music that they made. A very inspiring player for me.”

“I nearly went for Charlie Benante from Anthrax, because he was kind of my favourite. But Metallica were the band that changed everything, and Lars was such an integral part of what made that band. Lars and Metallica at that time were a band that were unlike anything we had ever heard before. They were a completely new animal. It was actually quite technical for the time, if you listen to Kill ‘Em All or Ride The Lightning the work he does on that is very innovative. So you have to give him his props.”

“When I joined Meshuggah, the guys were listening to these jazz drummers. And I dived headlong into all of that stuff. Dave Weckl was the first one I heard of these guys, and I had this floppy 45” of him playing when I was about 14, 15. It just blew my mind. The stuff that he was doing was unlike anything I had ever heard before. And his sense of time and rhythm was a huge influence on the band that Meshuggah came to be.”

“What catches my attention these days isn’t necessarily really crazy, technical metal drumming. But the thing that catches my ear is just a drummer who can lock into a really groove. It doesn’t have to be a technical groove, just an awesome one. And can lock into it for five minutes. And one guy that can do that is Sebastian Thomson from Trans AM, it’s not even metal, it’s like this futuristic rock. I don’t even know how you’d describe it. He one of those drummers. There is a song on their last album called Megastorm and it’s so awesome, not a lot of drummers could do that.”