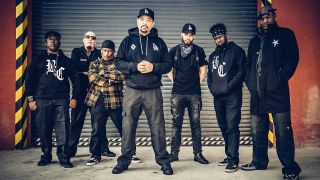 Lots of bands are getting political nowadays, but Ice-T’s been up there since 1992’s controversial Cop Killer.

Seventh album Carnivore, the follow-up to 2017’s Bloodlust, sees him on seething form, taking aim at everything from politic brutality to haters – with a little help from the likes of Hatebreed’s Jamey Jasta and Power Trip’s Riley Gale. Plus, there are tributes to fallen heroes Lemmy and Nipsey Hussle.

We grilled Ice about the stories behind the songs.

“Carnivore’s a metaphor. We got the growl for that from a lion video we found on the internet. I needed it to be a monster. I didn’t want to just have a guy screaming. I wanted it to be out there. I’m basically saying that all human beings are bloodthirsty savages. Humans are carnivorous. And whether you eat meat or plants, you eat life. If you don't want to eat meat because of some health reasons, I get it. But if you think that by not eating meat you're being nice, or you're changing what you are as a savage, bloodthirsty human, get the fuck over yourself. Plants are a life form. Humans do not eat death. They don't eat dirt. They don't eat rocks.”

“We met Riley [Gale] from Power Trip on the road and I loved that band. So I wanted to do something with him and he had the idea for the song. It’s about how cops shoot you but then it’s always the victim’s fault. They justify it by saying, ‘Oh. You reached for a gun’, or some shit. Riley does his vocal part in the song and then I come in over the top and I think it mixes really good. And the breakdown is crazy. So that’s a fun one. I just have to figure out how to do it live without Riley.”

“That one is a very Public Enemy-inspired record. And the beats give me the vibe of The Prodigy. I love that, man. I’m all about vibes. The song is kind of like No Lives Matter [from 2017’s Bloodlust]. Once we really understand that we mostly have all the same enemies, now we're powerful and you can't stop that power. So if we stop becoming distracted by what the media is trying to tell us then we unite as one and put everyone on the same side; then you can’t stop that bum rush.”

“I worked with Lemmy on a song called Born To Raise Hell [in 1994]. It’s crazy when you meet legends. He was a real personality. There was no one like him, and that’s what defines a legend. So we decided to fuck with Motorhead. But the only song we could really do was Ace Of Spades, because a lot of people that like Body Count might not know Motorhead’s catalogue. But they know Ace Of Spades. So we did that song and I had to try to sing it.”

“My name on Twitter is Final Level, ’cause there are levels to this game. People tell me, another year, another level. It’s kind of like on a video game where you level up. So I wrote that song about how it is when you’re just starting out and nobody believes in you. They tell you you’ll never make it. But then you pass that adversity and all of a sudden you win, and all the haters are like, ‘Whoa, you’re the shit.’ But I’m like, ‘Hey, I’m sorry, I can’t see you right now. I just levelled up. You’re stuck down there and I’m up here.’ So it’s an inspirational song about pushing past all adversity and pain and hate and Jamey Jasta [from Hatebreed] really liked the idea of that so he’s on there.”

“Every time we do a Body Count show, people want me to rap. There’s always a fan up there screaming, ‘Colors’ or some shit. So [my bassist] Vincent [Price] came to me and said, ‘Hey Ice, we should redo Colors so we could really play it.’ I was kinda like, ‘Eh… Fuck it, why not?’ I always don't think I got the best ideas. So if you’re part of my circle and you say, ‘Ice, let’s do this’, I’m not going to say no. I didn’t know they were gonna get [former Slayer drummer] Dave Lombardo to play on it. So they knock it out with him. I listened to it and I went, ‘Yo, this shit is fire.’ So I did the lyrics over it.”

“That's just me letting out my shit. No remorse is kind of like, All Love Is Lost from [Bloodlust]. It’s that true, brutal anger. A lot of times, when you’re mad, you’re not apologising, man. ‘I'm fucking pissed and if I offended you it was intentional! Motherfucking no fucking remorse, man. I refuse to fucking apologise!’ That song is for anybody who's happy that they’re angry at someone because that person deserves it. Fuck ’em. We all have people we feel like that about.”

“That song was written about Nipsey Hussle or just the feeling I got when he died. All this love came out and they sold out the [Los Angeles] Staples Center in two hours for his tribute concert. But how many people knew the kid? When people die, everyone’s out, but why not be there for them the same when they’re alive? Why do I have to die for me to be great? Losing Nipsey triggered the emotion but it wasn’t just about him. It was about losing friends. It seems like yesterday my man was sitting next to me. It's like, every day death comes unexpectedly. We did the song and Vince said, ‘Yo, I got it. Let’s Amy Lee this thing’. I still don’t know how he did it, but she reached out to me in an email and said someone close to her passed away, so she did it with us and she wrote from the heart. Now you got two people writing from the heart and she just killed it. But yeah, When I’m Gone might be one of the most sincere records I’ve written in a long time.”

“That one’s a basic Body Count grindhouse-style stupid fun song. You talk a lot of shit, now it’s time to back it up. It's really me yelling at somebody on the internet. So it’s kind of like Talk Shit, Get Shot from Manslaughter. I’m calling someone out who sends pussy texts talking mad shit but don’t want to meet. It’s like, it’s time. Let’s get it on. It has no politics. It’s just a good old rumble fight song.”

The Hate Is Real

“One day, I heard Jim Jones from [American hip hop group] Dipset say, ‘Love is fake, but the hate is real.’ I said, ‘That’s a song, because I believe when people say they love you that could be a figure of speech.’ It’s like, ‘Yo man, I love this dude.’ But when someone hates you, they really hate you. Hate is fuckin’ real. Whether it's racial hate, religious hate, whatever it is, it divides us. I feel like we’re dealing with all kinds of really hateful shit and we just need to address it.”

“That one was done at the same time we did Colors. And it was the same idea. We were just like, ‘Let’s rock it out and see how it comes out. Came out kind of dope.’ So that’s kind of a bonus track, and I like it because that’s the record that broke me. Every artist is looking for that moment where they break. Out of all the early rap songs, that was the first one that really put me on the map. In other words, without 6 ’N The Mornin’, there wouldn’t be no Body Count. I had four or five songs out before I brought 6 ’N The Mornin’. I was suffering. I was trying to find that thing. And that was the one that did it.”