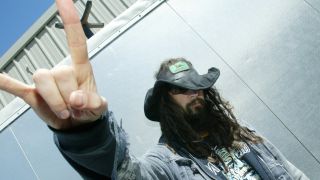 Following the band’s dissolution in 1998, Zombie launched a successful solo career with the multi-platinum Hellbilly Deluxe album before moving into film directing, beginning with cult horror film House of 1000 Corpses, a concept he subsequently developed into a ‘haunted house’ attraction for Universal Studios. Last month Zombie released his sixth solo album, the colourfully-titled The Electric Warlock Acid Witch Satanic Orgy Celebration Dispenser, which became his sixth consecutive Top 10 album on America’s Billboard chart. Currently headlining festival dates in the US, Zombie will tour the States this summer alongside Korn on the co-headlining Return Of The Dreads tour, before returning to Europe in October for shows in London, Paris and Berlin.

A true renaissance man, Zombie isn’t afraid to ruffle a few feathers with his thoughts on the state of modern rock ‘n’ roll…

“I hear what’s supposed to be rock music on the radio and it sounds like something my mom would like. To me, rock ‘n’ roll used to be a ‘fuck you’ to everybody: now rock ‘n’ roll seems like the most conservative, safe, middle-of-the-road crap. It’s embarrassing. Grunge rock came to the party and ruined it. Rock ‘n’ roll was a great party - and don’t get me wrong, I didn’t like ‘80s metal either, that was horrible – but grunge came in and it was anti-everything, anti-image, anti-show, anti-rock star… until there was nothing left but a bunch of depressed junkies crying about high school. Rock never recovered. It still hasn’t recovered.”

“I don’t think people know me at all. But that’s fine with me. I keep it that way on purpose. I see people who want to sell their personal lives for their careers, and that can work in the short term, but what happens when you’ve given up everything to the media? Where do you go from there? You can be on Twitter ‘til your fingers bleed but at the end of the day when you step on that stage you better rock balls or it ain’t gonna matter. Besides, I preferred when there was more mystery about things. Gene Simmons was more exciting to me when I thought he was spitting real blood.”

“I’m a control freak. It’s the only way you can stay true to yourself and your fans. Whatever happens in my career it’s nobody’s fault but mine.”

“This business is built on not giving anyone respect. My movies and music have always been based on a ‘Hey, go fuck yourself!’ attitude. It’s like ‘We think it’s fucking cool, so fuck you!’ If you stand around waiting to be respected it’s going to be a long, lonely life.”

“The rock stars I see today look like well-groomed little children. Everyone seems ashamed of actually being a rock star. When grunge came in, rappers became the new rock stars – they had the girls, the cars, the furs, the diamonds, everything was larger than life. Now it’s the pop stars who’re the rock stars: you’ll see a Lady Gaga show or a Beyonce show and go ‘Holy fuck!’, and that never happens at rock shows anymore. Wouldn’t it be nice if the rock stars started being the rock stars again for a while?”

“I like to always be working. If there’s not something that I need to get done, I freak out. It drives people crazy, like ‘Get him something to work on asap, because he’s going to go mental!’ Sometimes I feel I’m going to lose my mind, but I usually get it together.”

“I’m not accepting death. I’m pretty sure there’ll be some technology that comes along in the future that can keep me alive. Maybe there’ll be a weird cyborg that walks onto the stage with my brain floating in some kinda gel. Whatever, the world isn’t getting rid of me.”