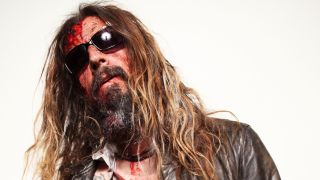 Rob Zombie's stock has seemingly never been higher. Having made serious headway into the UK album chart in the 90s with the White Zombie records Astro-Creep: 2000... and Supersexy Swingin' Sounds, the former leader of that band is not only leading his own band - featuring guitarist John 5, bassist Piggy D and drummer Joey Jordison - but is also heavily involved in directing movies and TV shows, as well as creating a series of comics. Now he's getting ready for his first UK tour in 12 years. One that’s already sold out.

_Does being involved in so many different areas of creativity make music even more special to you? _Actually it does. I love making music and being on stage. When I come back to it after directing a movie, it always brings home how much I enjoy this. I’m probably at my happiest in a band situation.

_You recently toured America with Alice Cooper under the banner the Gruesome Twosome. Is there any chance of that package coming over to the UK? That was just so special. To get the chance to tour with the man who is the reason I joined a band in the first place… It was so strange. I also got the chance to go into the studio with Alice and do some vocals for his new album [Welcome To My Nightmare II_]. Getting the chance to work with him and producer Bob Ezrin – that’s a classic combination, and it turned out to be so much fun.

**What did you learn from touring with Alice? **I think the fact that he’s 66 and is still out there doing it is remarkable. I learnt that lesson from him – that age is no barrier to rocking, and doing what you believe in. You look around now and there are so many great rockers still performing well into their sixties. in that respect rock is so like the blues – and some of those blues guys are in their mid-eighties. I’m no spring chicken any more, so to have the knowledge that you can go out and tour when you’re that old is very gratifying.

_Your former drummer, Tommy Clutefos, recently left to join Ozzy’s band, and you made some disparaging remarks about Ozzy. Has that calmed down? _Those comments were never aimed at Ozzy, I have no problem with him, nor with Tommy joining his band. My beef was the way Tommy did it. If he’d come to me and said he wanted to leave, I’d have said that was fine and wished him all the best. He didn’t. As far as I’m concerned, anyone can leave this band at any time, with my blessing. All I ask is that they’re just honest and tell me up-front. However, we’ve now got Joey Jordison of Slipknot, and the band is better than ever.

Has being involved with such a visual medium as film given you a better appreciation of the visual aspect of putting together a stage show? What it’s taught me is that a live show should have a beginning, a middle and an end. It’s given me a better appreciation of dramatic pacing. As for the stage show, we’re bringing everything over to the UK. Judge for yourself. I hope it all fits [laughs].

_The music industry is obviously going through tough times these days. Does the same apply to making movies? _I’ve made five films to date, and it is getting increasingly difficult to get a movie made. Right now it seems that the only way you can get one done is for under $1. million or for over 20. million. In other words you have to make something on a tiny budget, or do a blockbuster. What’s being squeezed out are the films with a middling budget, and that’s the area where I feel there’s most creativity. The same definitely applies to music. The middle ground is where you always find the best bands. Think of the Ramones or Iggy. They never sold millions, but what they did was so important. As a fan, I always preferred the Birthday Party to Bon Jovi. However, the way things are moving there soon won’t be room for those sort of talents and we will lose something special.

**You recorded an album in 199. called Rob Zombie Presents Frankenstein, on which you put together dialogue from the original 1930. Universal Frankenstein films. Did that experience of doing that tempt you to do the same for other classic monsters of that era? **That was the original idea. I was gonna do Dracula, the Mummy, the Wolfman. But doing the Frankenstein one was so frustrating. Universal had literally nothing, so I had to go out and get all the images and stills which were used. Then I fell out with the company over my movie House Of 1000 Corpses [2003 – written and directed by Rob] and the whole project fell apart. What really angered me was that nobody at Universal cared about these great films. You know why? Because they’re convinced younger audiences don’t give a shit. The same applies to record labels. They’re obsessed with youth – and that’s costing them.

**Your next movie as a director is Lords Of Salem. Will you be doing the music for it as well? **Yes I will. But it won’t be hard rock. My idea is to do something dark and spooky. The sort of thing the Italian prog band Goblin have done in Italy with Dario Argento’s horror films.

Are there any plans to film any of your upcoming live shows for a live DVD release? I’ll admit something. Whenever one of my shows is filmed, I get distracted from the performance. I think about the camera angles and all the technical stuff, and I find my mind wandering from what I’m doing on stage. So there are no filming plans right now. Anyway, to me a stage show is all about living for, and in, the moment. Once it’s over you should move on and not feel compelled to relive it. Somehow DVDs go against the grain of what a show is all about – the feeling of being part of a special time, which can never be recaptured. That’s the beauty of live music.