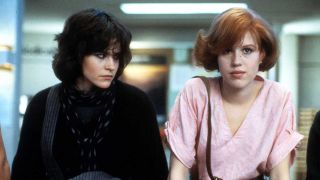 The same doesn’t apply to movies.

For tons of reasons really. But mostly for the way it killed Simple Minds.

The 10 singles that Simple Minds released before (Don’t You) Forget About Me comprised one of the most impressive runs in 80s music:

The American, Love Song, Sweat in Bullet, I Travel, Promised You A Miracle, Glittering Prize, Someone, Somewhere In Summertime, Waterfront, Speed Your Love To Me and Up On The Catwalk.

It’s cool now to pretend that Simple Minds were always naff, with their pleated trousers, slip-ons and messiah complexes, but in actual fact they were amazing — Roxy Music, The Thin White Duke and Krautrock funnelled through punk, underpinned by some of the funkiest basslines around — until The Breakfast Club came along and fucked it all up.

Until that moment, Simple Minds were like Ally Sheedy in the movie. Weird. Surly. Unimpressed by the jocks and the squares — and in no mood to try and fit in either.

And then The Breakfast Club came along, John Hughes — a boy-man with a totally suspect crush on Molly Ringwald; a Reagan-era Republican constructing an idealised vision of a safe white America — waving his big cheque at Simple Minds, offering up some grubby bullshit that had already been turned down by Bryan Ferry and Billy Idol. The writer, Keith Forsey, was the go-to-guy for soundtrack cheese. Forsey had penned disco hits like Hot Stuff for Donna Summer and by the 80s was churning out the hits for Hollywood: Glenn Frey’s The Heat Is On (Beverley Hills Cop), Irene Cara’s Flashdance… What A Feeling, Limahl’s The Never-Ending Story.

You know, all the greats.

Everyone in their right mind hates the ending of The Breakfast Club – Ringwald’s character taking everything loveable about Sheedy’s and transforming her into another compliant wannabe – but it stands as a perfect visual metaphor for what the movie did to Simple Minds too.

Hughes’s inference was that inside every punk kid was an All-American conformist waiting to be unleashed. He had Sheedy’s character made-up and made-over and then served up, a simpering Stepford wife for Emilio Estevez’s Alpha-male jock.

It’s easy to blame Ringwald’s character for that make-over, for her presumption that Sheedy’s quirky outsider secretly wanted to be just like her.

But, really, it’s Sheedy's fault. She lets it happen. (The girls I went to school with would’ve ripped Ringwald's posh-girl hair out of her lily-white head.)

And just like it’s Sheedy, it’s Simple Minds. With that one song they slipped off years of Caledoni-Krautpunk cred, and let Hughes powder their faces and slip them into a camisole. (Don’t You) Forget About Me simpered for the frat boys like Sheedy, and you couldn’t look at them the same way ever again.

MVP bassist Derek Forbes left and next album, Once Upon A Time, was Minds-by-numbers: vapid arena rock tailor-made for the stadiums it’d be shopped in.

Simple Minds weren’t the only act sabotaged by having a song in a John Hughes movie. The March Violets went from topping the indie charts with Snake Dance and Walk Into The Sun to two songs on Some Kind Of Wonderful and… nowhere. Ferris Bueller had Flesh For Lulu posters on his wall and the band recorded I Go Crazy for Some Kind Of Wonderful. It wasn’t their big break, it was the beginning of the end. Echo & The Bunnymen recorded Bring On The Dancing Horses for Pretty In Pink. Their next album – released three years after 84’s Ocean Rain – was their worst yet and they split the year after.

The Psychedelic Furs scored their biggest hit with the re-recorded movie tie-in Pretty In Pink but then claimed to have been rushed into the studio to record 1987’s Midnight To Midnight album. Even they described it as “hollow, vapid and weak”.

The producer of their last good album? Keith Forsey – yup, the guy who wrote (Don’t You) Forget About Me. The 80s were Keith’s world: we just lived in it.