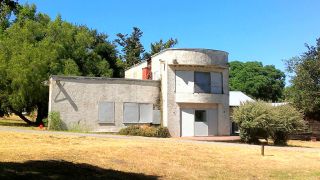 The mention of “lost tribes” tends to conjure up visions of windswept television presenters striding purposefully through the ruins of Inca empires, but events on the West Coast have kicked the whole concept into the 21st Century. One of the Grateful Dead’s late-‘60s communes has become an archeological site.

The band’s first base of operations had been the famous 710 Ashbury Street in San Francisco but, following a highly-publicised police raid in ’67 in which Bob Weir, Pigpen and nine others were charged with possession of marijuana, the Dead moved en masse to a huge 26-room plaster-fronted mansion in Marin Country - apparently attracted by its acoustics. They took up residence with their extended families and assorted roadies, hangers-on and herb-salesmen, rehearsing in its cavernous rooms and inviting the Jefferson Airplane, Janis Joplin and Nina Simone over to jam. The picture on the back of their ’69 album Aoxomoxoa was taken in the house grounds, the band and entourage sprawled on the grass with their “old ladies” and flaxen-hair children (the five-year old girl on the far right at the front, of course, being Courtney Michelle Harrison, daughter of roadie Hank Harrison and the future Courtney Love, circled below).

The Burdell estate at Olompali had been rented by a former businessman called Don McCoy who’d owned the local Heliport Building and a chunk of floating real estate in the bohemian barge village of Sausalito. A classic drop-out, he’d felt the warm winds of acid rock, binned his career, bought a head-band and some beads and begun pouring his vast personal wealth into the counter-culture, the inevitable result being that scores of freeloaders soon colonised “The Whitehouse Of Hippiedom” naming themselves – with a certain amount of nerve - The Chosen Family.

Of course it all went horribly wrong.

A large number of the “communards” were at a concert in San Francisco on the night of 2 February 1969 and were overtaken by fire engines on their way home. Faulty wiring had ignited an inner wall, burning their country pile to cinders and destroying most of their worldly possessions.

And there this debris remained, apparently untouched, until 1981 when Breck Parkman, Senior Archaeologist for California’s State Parks, noticed the ashes were full of artifacts and thought the site worth excavating. This began in 1997 but was abandoned on the discovery of ‘hazardous materials’ (lead and asbestos), a ‘hazmat’ crew eventually arriving – think blokes in white suits and facemasks in that scene in E.T. - and it was transferred to barrels for long-term storage. When finally declared safe, Breck and his team began picking through the wreckage and found a “surprisingly rich” cache of shoes, clothing, broken dishes, glass bottles, beer cans, a roach clip, steak bones – damning evidence as the household was vegetarian - jewellery, a sewing-machine, cosmetics, children’s toys, stereo components, reel-to-reel tapes, billiard balls and a number of vinyl records. The 93 charred discs with legible labels include works by The Beatles, Vanilla Fudge and Mike Bloomfield & Al Kooper – but also albums by grating ‘folk uncle’ Burl Ives and light entertainment crooners Barbra Streisand, Tony Bennett, Dean Martin and Judy Garland; amusing to think Judy At Carnegie Hall might have been spinning while Jerry Garcia composed the cosmic China Cat Sunflower or head-swimming Mountains Of The Moon.

Vinyl records recovered from the dig at Olompali: The Beatles’ Rubber Soul (left) and Bill Cosby’s Why Is There Air?

“It’s a time capsule,” Breck told me down the phone from California. “It’s unlikely, though not impossible, that any of these records belonged to the Grateful Dead themselves, as they’d moved out before the house-fire – though finding that Burl Ives album was pretty cool! - but understanding The Chosen Family informs our knowledge of the Dead. Some of the artifacts that stand out include an eyelash curler as it shows fashion was important at Olompali - that ‘dirty hippie’ stereotype doesn’t hold up to scrutiny. And the Monopoly pieces we found are fun to consider given that the game pays homage to Capitalism, but hippies being anti-business doesn’t stand up to scrutiny, either.”

Could he feel any effects of the place in the Grateful Dead’s music at the time?

“Jerry Garcia undertook his final transcendental acid trip while living at Olompali. It was an epic DNA-unravelling psychedelic experience that he and others have described in graphic terms. Olompali is an ancient Native American village and burial site and that figured prominently in Garcia’s trip.”

Breck’s research revealed the area had been occupied for a staggering 5,000 years, a rich “flow of history” that now runs all the way to the Dead’s tenure at the Burdell mansion.

“It had been punctuated by historically unique occurrences - the most expansive Native American midden site [domestic waste pit full of animal bones], the oldest standing structure and earliest formal garden north of San Francisco, and the only fatality of the Bear Flag Revolt when the Californian setters rebelled against the Mexican Government - and the earliest San Franciscan dentist! I felt all aspects of the site’s history were equally significant and the Dead’s commune seemed a fitting chapter in the human story. Olompali represented a back-to-the-land movement for the band. It was a refuge; 1966 was a year of taking it all in. The next year would see the Dead explode into the legendary band we know, and some of that rise can be attributed to their time at Olompali.”

I love the way the Dead did everything to the power of ten, casting their long shadow over the rather provincial communes springing up around Britain in their wake. When Jerry Garcia takes acid, he does so on the mystic site where the Miwok Indians carved totem poles of giant elk and eagles and feasted on mussels and grasshoppers. Follow that, The Global Village Trucking Company! Did Breck think - as I do - that this excavation shows how significant the ‘60s have become, that we’re now looking for insights into the Dead’s world in the same way we examine, say, the graffiti on Roman walls?

“Absolutely! The Sixties stand out in a way few other decades do. The world came to an edge during that time and then switched direction, forever changed by the experience. And I think we are who we became because of that time.”

_Pictures of the Burdell Mansion and excavated items. All images courtesy of California State Parks. _

Maura McCoy, daughter of commune-founder Don McCoy, is producing a documentary film about Olompali and the Chosen Family commune. The film is being narrated by American actor, Peter Coyote, an occasional visitor to Olompali during the commune days. Watch the trailer below.