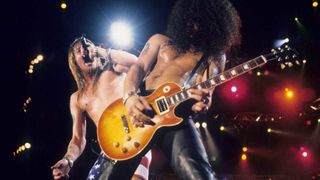 Appetite for Destruction is most likely the greatest rock’n’roll record ever made. I say ‘most likely’ only because let’s face it, neither you nor I have heard every single rock album ever recorded. There’s always a chance we missed something. But I don’t say most likely because I think, say, the White Album is better. It’s not. Sure, The Beatles are better than GN’R, I’m not a fucking madman, but they never released anything as consistently excellent as Appetite. Nobody has.

It was the ultimate, declarative, turn-out-the-lights-we’re-done-here statement on every single reckless and righteous rock n’ roll cliche ever concocted, a Nagasonic teenage warhead of belligerence and bluster wrapped around sleaze-metal guitars so gnarly and toxic you could contract an STD just from whiffing the vinyl. Appetite was about the loss of innocence, there’s and ours, and it dragged an entire generation of hair-bear goofs into the stark realities of life on the streets. It made rock’n’roll dangerous again. It made the people who played it dangerous to the public and themselves. It made you dangerous just from basking in it’s sinister neon glow.

But I mean, that was it. The band was poor and hungry and skinny when they made it, living in a storage shed somewhere and subsisting on whatever crumbs their various girlfriends brought around. By the time they were contracted to record their follow-up, forget it. They were drug-addled millionaires who had thoroughly lost the plot. And so they created an unwieldy beast of a double-album so bloated and unmanageable that no one could even make heads or tails of it.

Use Your Illusion I&II is exactly what too much money and too much privilege does to a band and not only did it cause the bedrock of GN’R’s core to crumble, it betrayed the very essence of what made GN’R great in the first place. A lion doesn’t have to explain he’s a lion. And a lion would never have made Estranged. The lethal charm of Appetite is that it was the work of sharp-eyed predators, predators who created an album so perfect no one can touch it even thirty years later. Predators who were lean and mean and possessing of keen feral intelligence. Illusion sounds like something fat dummies would make.

But all is not lost. Deep within the stacks and stacks of Illusion’s so-so’s and eye-rollers there exists a great rock’n’roll record. Not Appetite great, but certainly, you know, Van Halen II great. We just need to do some surgery. Here, then, is the Illusion that could’ve been.

You Could Be Mine

This was the Illusion project’s first single but for some reason it was buried on II. It is the most obvious successor to Appetite on both albums and makes the perfect introduction to the new big-budgeted, space-age version of GN’R. It’s just as snaky and venomous as anything on the first record, only it’s bigger, louder, and clangs like a giant robot in a airplane hangar. It whets the appetite (ahem) for the destruction that is surely to come. Load it in up front and you’ve got one hell of a party-starter.

Both Illusions are stuffed with Emperor’s New Clothes moments, most of them courtesy W. Axl who, according to all known accounts, was acting about as rationally as Scarface during the recording sessions. So we are obviously deleting all those embarrassing moments forever. I mean, was there no one around to tell this dude that “I’ll kick your bitchy little ass” is about the most bitchy little thing you could possibly say? Anyway, this was the most authentically rock’n’roll song Rose composed for these albums. It’’s a great metal-y Stones rip-off, and keeps things flowing nicely.

The 80’s were over, sure, but a great power-ballad is still a great power-ballad. Originally tracked at song number four on part I, I’d cinch it up one to provide a short breather for the ruckus to follow. It’s also the last time we need anything soppy from these dudes. If you’re that much into November Rain, you can have it on a b-side or a bonus EP or something. This is not a Queen record, man.

Another ferocious glam-slammer shoved into a corner in part II, Pretty Tied Up is a fantastically sleazy little number that harkens back to the band’s salad days. It sounds like the work of dangerous men with disturbing proclivities, and it rocks like crazy. As the 90’s wore on, songs like this became the province of Scandinavian action-rockers like The Hellacopters which is fine and all, but it’s kind of a drag that Guns traded in snarly rockers like this one for whatever Queensryche/NIN bullshit was going on in Chinese Democracy. They had more of this in them, I’m sure of it.

You gotta acknowledge that the band is older and wiser at this point (well, older at least), so this one pretty much does exactly that. No way the Appetite version was sitting around listening to Dylan, but now? Sure, why not? It’s also got “classic rock” stamped all over it, in a way that never existed for Guns before. It’s what they sound like with all the punk drained out. It’s also just a great song, no matter who sings it.

Why not close side one with a surprise cameo? Alice Coooper pops up outta nowhere on this delightfully bonkers ode to drugs, strippers, New York City and other forms of madness that finds the band wandering into psychedelic metal territory, and thoroughly nailing it. As with Knockin’, it shows maturity with restraint. And it’s fun, even if it’s about being fucked-up on heroin.

The opener on Side 2 is supposed to remind you of why you love the band you’re listening to, and Bad Apples is quintessential GNR, a cowbell-banging all-night rocker that you can dance to if you’re drunk enough. And in the alt-world where Illusion is a lean-cut single album, we’re all drunk and dancing all the time.

One of Izzy Stradlin’s finer moments, this slurry, wobbly-legged Stones pastiche is GN’R at their slinkiest.

While we definitely don’t need it to be seven and half minutes, this powerful slow-burning churner really is one of Guns’ best songs, even if it is kind of a Heaven’s Door redux. But it also serves as a reminder that the band had more on their mind than drugs and women giants piles of cash. They also had anxiety and depression and dysfunction and all the other stuff that drug, women and money often bring.

Right Next Door To Hell

After Civil War, you gotta bring the tempo back up, and this’ll do it. A fast, thrashy, head-spinning howler of a song, this is the heart-pumping Guns we were promised in ‘87.

Keeping things cranked to 11, Locomotive is one of Illusion’s forgotten gems, a song so raucous it threatens to devolve into chaos at any moment. Another reminder that they were called The Most Dangerous Band In the World for a reason.

Let’s end it with the craziest shit imaginable, an eleven-minute drug psychosis nightmare written by Slash in a heroin haze. There’s no real chorus and everybody might die at the end, even you. The perfect ending for a band living on the razor’s edge of everything.

Guns N' Roses Quiz: Use Your Illusion I & II