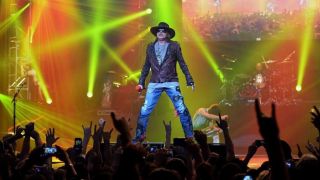 It’s the reunion we thought we’d never see – but is it the one we wanted? With missing key members, inflated ticket prices and the reliable unreliability of Axl Rose threatening to undermine their return, we asked some Hammer favourites…

“I’m excited about it, man! I have a great relationship with my band, and we’re still best friends – it’s so fulfilling to do what you love with the people you love. And it makes me sad when someone would suggest to Axl or Slash about a reunion and they’d say, ‘No, never.’ It broke my heart! So the fact they’re kinda coming round… we’ll see how long it lasts. I just hope they can start over. They’re all older now and have done their thing, enjoy being one of the greatest rock bands in the history of rock’n’roll. Just putting it out there: I’d love to open on that tour. Just two songs, that’s it!”

“I never was ‘in’, so I’m out! I could never reallyget it, to be honest; I read Slash’s biography and it was interesting, and he’s a nice guy, but anything besides Slash, all this attitude ofAxl, I don’tget it. I don’t think you have to behave like that. There are so many things I can tell you that I don’t like in human beings in general, and nobody gets the right, even if you’re a fucking ‘rock star’, to behave like that. There’s nothing cool about it. To let people wait for hours and hours and treat people badly, and think you’re better than anyone else? Also I’m not into the music, no. So I’m out.”

“That moment when Axl Rose steps off the bus in the Welcome To The Jungle video changed my life. I was 12 years old and wanted to be him. The same year in junior high school, I chose to be Axl for Halloween; I was feeling all kinds of badass. I became a lifelong fan of Guns N’ Roses. I learned to emulate his voice, his stage moves. I’ve been waiting years for a reunion, and yes, I’m stoked to have at least three of the original members touring again as GN’R. Seeing Axl and Slash together again will be, for many of us diehard fans, a dream com true. Just don’t blow it, Axl!”

“I most definitely care for a GN’R reunion! If a band has so many iconic and history-defining songs as Paradise City, Welcome To The Jungle and Sweet Child O’ Mine, of course they should not only beallowed, but be welcomed to have a reunion and play these monster hits again. Slash’s guitar riffs and melodic figures are without a doubt unique, and proudly carry many of their most famous songs, but to me it was Axl’s singing that really made GN’R special. Of course, with this history also comes a heavy burden – GN’R have to shape up and get things right. I wish them all the best, and hope they’ll make a musician’s heart proud by proving all the naysayers wrong, but if they don’t deliver, they deserve what’s coming for them, and it’s not going to be pretty!”

“I’m in two minds with the Guns N’ Roses reunion. On the one hand, they areone of my favourite bands and Appetite For Destruction is one of the greatest records of all time in my opinion and it would be incredible to see that magic onstage once again. But on the other hand, sometimes things are best left alone. What if the magicis gone? What if the memories and legacy Guns N’ Roses have left with us all turn out to be better as a fantasy over the reality of the reunion? Either way, I will definitely be attending a show and singing along to every goddamn word. My air guitar has been polished and is ready and waiting!”

“It’s complicated, and I’m sure that cliché applies to the band’s relationships as well. It’s like imagining the Stones being broken up for many years and through bitter feuds, then Mick and Keith reconcile, bring in Bill Wyman and tour as the Rolling Stones without Charlie Watts or Ron Wood (or Brian Jones, were he still alive). But at the same time, it’s really great to see Slash and Axl bury the hatchet, so I’m all for it. With respect to the other guys, especially Izzy, who really seems like a missing piece of the puzzle, Slash’s guitar sound and Axl’s voice are the dominant part of the GN’R sound – they just seem made for each other. It’s been hard to watch any later lineup of Guns N’ Roses and not think of Slash.So as much aseveryone misses the complete package, what is missed most is hearing those two guys together.”