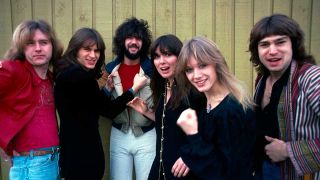 The funny thing about Heart is that the group began without the two people that would make the band so great and so significant: singer Ann Wilson and her guitar-playing kid sister Nancy. In fact, Heart were born out of a regulation all-male band, The Army, which formed in Seattle in the mid-60s. In 1971 they took on the name Heart. But it was only after Ann joined the band in 1972, followed by her younger sister Nancy in 1974, that Heart would find a signature sound and global fame.

There were female rock stars before Ann and Nancy. In the late 60s, Janis Joplin, Grace Slick and Mama Cass Elliott were prominent figures in American rock’n’roll. And in the late 70s, when Heart had their first hit records, so did other groundbreaking female artists, such as Patti Smith, Kate Bush and Debbie Harry. What made the success of the Wilson sisters so remarkable was that Heart operated in the most male-dominated arena in music: hard rock.

Moreover, they achieved that success on their own terms. A record company ad for Heart’s 1976 debut Dreamboat Annie pictured Ann and Nancy in a bare-shouldered close-up with a tag line that hinted at lesbian incest: “It was only our first time!” But the Wilsons would not give in to sexploitation. They might have been sex symbols, but they were musicians first. And in a recording career that now spans four decades, Heart have created a number of era-defining albums with total sales in excess of 35 million.

Across the years there have been peaks and falls. Landmark 70s albums, including Little Queen and Dog & Butterfly, had Heart touted as “the female Led Zeppelin” – somewhat erroneously, given that Ann and Nancy were the only women in a group of six.

A decline in the early 80s was followed by a spectacular comeback in the second half of that decade, in which the Wilsons became big-haired icons of the MTV age.

In the 90s, the formation of the sisters’ side project, The Lovemongers, led to an 11-year gap between Heart albums, with the band on hiatus for half of that time. But Heart’s renaissance was completed with three albums rooted in their classic 70s sound. As Ann Wilson said recently: “It’s rock’n’roll, man. It’s big, deep and it’s what Heart does best.”

Heart’s greatest album kicked off with the heaviest song they ever recorded, Barracuda. And the fury in that song spoke volumes about the mood in the band. Little Queen was the band’s debut for Portrait and their second album proper, released one month after their previous label Mushroom had issued an unofficial Heart album. It was a farcical situation, but Little Queen restored the band’s credibility – and then some.

Ann Wilson’s lyrics in Barracuda were a riposte to Mushroom’s sexist marketing of Heart’s debut Dreamboat Annie, and the riff was equally venomous. But the album isn’t all piss and vinegar. Among a handful of gentler songs is Love Alive, a homage to Led Zeppelin.View Deal

A number of rock bands that were big in the 70s came back from the dead in the 80s. Most amazing was the reinvention of Heart, which made them bigger than they’d ever been before.

With this self-titled album came a bold makeover. Their music was retooled as super-slick AOR, and the girls rocked Dynasty hairdos and frilly corsets. The album topped the US chart, as did These Dreams, an ethereal ballad sung by Nancy.

Other hits arrived with Never, Nothin’ At All and the monumental power ballad What About Love. Heart is one of the quintessential 80s AOR albums, and the best work of the band’s second imperial phase.View Deal

The first Heart album was both a million-selling hit and an artistic triumph, featuring three signature songs that would become classic rock anthems: the rollicking Crazy On You, the funky Magic Man and the gentle title track. Guitarist Roger Fisher, a founding member of pre-Heart band The Army, was still present, but it was Ann and Nancy who were calling the shots. Only they were on the album’s cover, and they were doing the lion’s share of the songwriting.

There were echoes of Zeppelin in Heart’s blend of hard rock and folk-inspired acoustic textures. But as this album proved, Heart had their own unique style.View Deal

In the age of vinyl, there were, of course, two sides to every album. And with Dog & Butterfly, Heart used this format to make an artistic statement. As its title implied, this album clearly defined the two sides of Heart.

On side one, named ‘Dog’, the band rocked out. Cook With Fire is a heavy boogie with added concert ambience, while the slinky Straight On was a Top 20 US hit. On side two, ‘Butterfly’, the onus was on acoustic-based material, such as the meditative title track. And to finish, the two elements were brought together in Mistral Wind, one of the band’s deepest songs, an epic evoking Zeppelin and Rush.View Deal

Heart’s 80s comeback was not entirely of their own making. On 1985’s Heart, writers from outside of the group supplied three of the hits, and the same was true of the follow-up, Bad Animals.

Who Will You Run To, a ballsy anthem, came from Diane Warren. There’s The Girl was written by Holly Knight and Nancy Wilson. And the album’s monster hit, the overblown ballad Alone, was by Tom Kelly and Billy Steinberg, authors of Madonna’s Like A Virgin and The Bangles’ Eternal Flame. Ann Wilson transformed Alone into an emotional tour de force. It was another US No.1, and drove Bad Animals to sales of five million.View Deal

The band’s Fanatic is a late-career highlight, on which their classic sound is subtly reinvented for the modern era. Retaining the services of producer and writer Ben Mink, their chief collaborator on 2010’s Red Velvet Car, the sisters went for an organic approach on Fanatic. “We decided to go super-elemental,” Nancy said, “so there’s a kind of raggedness to the tracks.”

Some were recorded on the road, and across the whole piece, there’s a feeling of spontaneity, from the rock crunch of the title track to the trippy Kashmir vibe of Corduroy Road. As Nancy said: “We’re not going out quietly.”View Deal

In April ’77, Mushroom Records issued the album Magazine – a collection of live tracks and unfinished studio recordings – without the approval of the band, whose first album for their new label Portrait would be released in May. The ensuing legal battle was resolved when this version of Magazine was withdrawn from sale, on agreement that the band would complete the album for a re-release in 1978.

And despite the whiff of contractual obligation, the new Magazine was surprisingly good, with some great songs in Heartless, Devil Delight and Just The Wine.View Deal

Between the twin peaks of Heart’s success in the late 70s and late 80s, there were the lost years. With two lame-duck albums – Private Audition in 1982, and Passionworks in 1983 – they couldn’t buy a hit. But at the start of that decade, there was no sign of the slump to come. Bebe Le Strange, their fifth album, made the Top 5 in the US.

It had a punchy sound in tune with the era of new wave, and a handful of songs to rank among their best, including the sexually charged title track, the swaggering hit Even It Up, and the Beatles-meets-Zep blues of Down On Me. Put simply, Bebe Le Strange is the band’s most underrated album.View Deal

The third golden age of Heart, their second comeback, began in 2004 with Jupiters Darling, the band’s first new album in 11 years. It featured guest appearances from Pearl Jam’s Mike McCready and Alice In Chains’ Jerry Cantrell – a salute from one generation of Seattle rock royalty to another.

But it was on the following studio album, Red Velvet Car, released some six years later, that Heart really got their mojo working again. The album was more focused than Jupiters Darling, and it was a reconnection to the music they made in the 70s. That could be heard in the sweet simplicity of the title track and Sunflower, and the kick-ass rock of the self-explanatory WTF.View Deal