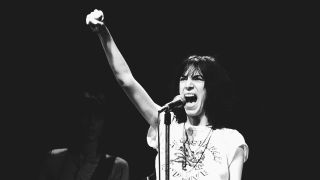 Rarely has there been such a cataclysmic collision of high and low art as when Patti Smith’s album Horses was released in ’75. With Smith still more poet than singer at the time of its release, the album grew out of her readings-cum-performances at New York’s St Mark’s Church in 1971.

She’d convinced rock critic and record store clerk Lenny Kaye to provide both moral support and a rather minimalist musical backdrop to her feverish poetry with his electric guitar. Together they created something raw, deconstructed and haunting.

Despite an offer from Johnny Winter’s manager, Steve Paul, to get her a record deal in those early months, Patti demurred, explaining that she “didn’t have a mission yet”. Or a band. But over the next two years, Kaye and newly hired keyboard player Richard Sohl brought in bassist Ivan Kral and drummer Jay Dee Daugherty, and Patti declared that she was ready to transfer her poetry to another medium: “In 1974 I saw Television at CBGBs and I saw what I perceived as the future.”

Around the same time Clive Davis was looking for musicians to sign to his new label, Arista. “I was just amazed that I was gonna be allowed to make a record,” Smith says. “I thought of all the great people that had made them and now I was gonna make one. I wasn’t even concerned about whether I’d ever get to make another one.”

With Velvet Underground member John Cale producing, Smith and her band recorded their debut album at the famed Electric Lady Studios in NYC. Cale seemed a perfect choice, but he and Smith butted heads from the onset. Smith confesses: “I drove John crazy.” After one particularly frustrating conflagration Cale asked her why she chose him. “Because your records sound so good,” she replied. “You bloody fool, you should have picked my engineer,” Cale countered. The band decided to reject all Cale’s suggestions, and as a result they found their own voice in the struggle.

Smith poured her soul into Horses, especially on the first track, Gloria, drafting one of the most celebrated opening lines in all of rock history: ‘Jesus died for somebody’s sins, but not mine’ (something she commandeered from her poem Oath). More declaration of personal autonomy and freedom than a rejection of her own personal God, she neatly melded the strident poem into a rather slurry speeded-up version of Them’s garage rock classic that put Van Morrison’s on the map.

Crawdaddy! magazine called the song a “declaration of existence,” but for the rest of us it was Smith’s coming out party – and we’re not speaking sexually despite the provocative lines about a ‘sweet young thing humping on a parking meter’. The confusion never bothered Smith. “I’ve never been gender specific, or wanted to be gender specific as an artist or a human being.” Equally misunderstood is Redondo Beach, which critics surmised was about a quarrel between two Sapphic lovers, one of whom committed suicide. Not so. It was inspired by a rare spat with her sister Linda, who left in a rage, and didn’t return that night.

Ultimately Horses was more call to action than true album, helping to spawn a cultural revolution. “I was speaking to the disenfranchised, to people outside society, people like myself,” Patti says. “I didn’t know these people, but I knew they were out there I think Horses did what I hoped it would do. It spoke to the people who needed to hear it.”

Ian Fortnam shared a drive through the streets of London with Patti Smith to hear the 67-year-old ‘godmother of punk’ talk youth, faith, art and being glad to still be alive and working

Patti Smith – bird-like, slender, elegant, charming – appears way more comfortable coolly descending Claridge’s ornate central staircase than you might expect of an artist labouring under the mantle ‘godmother of punk’. Here to promote Darren Aronofsky’s Biblically blockbusting film Noah, for which she provided the closing theme, Mercy Is, Patti is in transit to a screening. Sliding into the back seat of a limo, she studiously addresses a text from her daughter and clears her throat of London smog before musing upon religion, Rimbaud and the Rolling Stones. “I’m Classic Rock-friendly,” she smiles as we ease into Park Lane’s early evening hubbub.

Catholic Online currently carries the headline: ‘Noah movie features Christian artist Patti Smith’. Are you comfortable with such a definition?

Maybe it had me confused with someone else. But I wouldn’t deny being Christian. I was raised a Christian, I follow the teachings of Christ, so I have no problem with that title.

Despite a religious upbringing, you went in search of your own spiritual truth via Tibetan Buddhism at a young age. Did it colour your subsequent relationship with your parents?

No, my father didn’t have any particular religion. He was always searching and asking questions. I was raised a Jehovah’s Witness, and when I decided to leave the Witnesses, that was my choice. In their mind I’d had sufficient structural education and it was up to me. I didn’t pursue Tibetan Buddhism per se, I looked into many different faiths. I went to visit a Rabbi because I loved Anne Frank so much that I imagined that maybe I could become Jewish. He had to explain, you don’t become Jewish, you are Jewish. In the end, I don’t prescribe to any religion. I continue to read The Bible, I say my prayers, but I have my own system.

Was it their revolutionary demeanour, or the poetry in their hearts that attracted you to outsider figures like Rimbaud and the Rolling Stones?

For Rimbaud, when I was young it was his face that attracted me, because he had a beautiful face. But it became a more enduring relationship due to his work. I loved his poetry. I wouldn’t have loved him just for his face alone. I would have moved on rather quickly.

The Rolling Stones – they possessed all that a teenage girl like me could want. They were raw, they had sexual energy, I liked their look, it was fun to fantasise that Brian Jones would be your boyfriend. But I loved their songs. It was their work. Had the Rolling Stones not been great, I wouldn’t have had such a longevity of following them. I’d loved The Animals even before the Rolling Stones, and Bob Dylan, all of these people. I was partially attracted to them because I was a young girl, but in the end it was because I loved their work.

Your career and that of your peers was very much seeded in a countercultural environment. Does a counterculture still exist, and without one, can art continue to challenge and progress?

I wasn’t even aware that there was a counterculture. We didn’t have names for it. Even ‘punk rock’, and all of those things, they came after the fact. I just do what I do, and don’t really like calling it anything. And in terms of what’s happening now, you’d have to ask the new generations how they feel and how they’re developing their cultural voice.

I’m aware that at this time in my life, some of my work might not be relevant to the aesthetic shift in terms of melding creative and political ideas with our current technology. I often feel like William Blake in the middle of the Industrial Revolution. But, like Blake, I just do my thing. I don’t care if the work that I do might have obsolete edges, I do it anyway because it may eventually be needed. Maybe as a stepping stone to help people find their way to where they are.

Your 2010 memoir Just Kids chronicled your formative relationship with late photographer Robert Mapplethorpe. How cathartic was the process of writing it?

I didn’t write it to be cathartic, I wrote it because Robert asked me to write it. If he didn’t ask me to write it, I don’t know if I would have. Our relationship was such that I knew what he would want and the quality of what he deserved. So that was my agenda for writing that book. I wrote it to fulfil my vow to him, which was on his death bed. In finishing, I did feel that I’d fulfilled my promise to him.

His photographs of you are iconic images. When you’re faced with them, do they essentially ground you, by reminding you of the fearless idealism and integrity you had at the time?

You’re probably a bigger thinker than me, but when I look at the pictures that Robert took, I simply see us. I look at a photograph and I remember the moment we shot it, what drew us to shoot it, what was the atmosphere. It could be that we were arguing and took the picture anyway, or it could be that he was trying to cheer me up by taking my picture, or we had a specific mutual mission. But I really see us and what moment in our relationship it magnifies. When you’re young you’re not so self-conscious that you think about things in those terms – you just take the picture.

I wouldn’t instruct myself on the way that I worked or anything. I’m basically happy with my life, the mistakes that I made. If I made wrong choices or hurt anyone’s feelings, these regrets are my own. I’d make sure I got my teeth cleaned and tried to make sure that I stayed healthy, because life is precious and I’d like to be working a long time, so anything that we can do to take care of ourselves gives us more leverage in doing our work.

She’d probably say: “Oh my gosh, I’m still alive, that’s awesome.” I never thought I would live this long, so I think she would be very, very happy that I kept going and that I’m still doing my work.

The reappraisal of Smith’s seminal Horses appeared in Classic Rock #150, the Q&A in issue #197. For more on Patti Smith then click the link below.