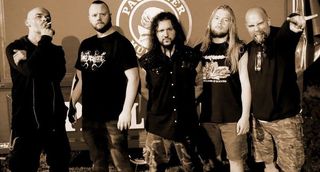 Norway isn’t known primarily known for its death metal scene, if only because so many of the country’s prime movers abandoned it in the early 90s to worship Satan and set fire to stuff. What Norwegian death metal does have, however, is quality over quantity, be it the occult-scorched abyss of Oslo’s Obliteration or the band that have become the native standard bearers for groove-laden brutality for over two decades: Kristiansand’s Blood Red Throne.

Formed in 1998 by then-Satryicon members Død and Tchort – the latter now the frontman for Green Carnation and also a former bassist for Emperor – Blood Red Throne’s much changed line-up since has been a who’s who of the Norwegian scene. Their ability to piledrive you into endorphin-surging submission, however, has remained constant.

If anything, the introduction of Yngve ‘Bolt’ Christiansen as vocalist in 2011 has amped up their ribald aggression. Drilled to a militaristic level of precision, yet still sounding like they’ve been let loose amongst a helpless populace, albums like 2016’s Union Of Flesh And Machine (Homicidal Ecstasy being a rather apt songtitle) and their most recent salvo, Fit To Kill, aside from setting a discernible theme, have a knack for wreaking havoc from multiple angles. From palpitating d-beats to full-on blasts, troll-on-a-rampage growls to flesh-ripping, having-a-moment-here screams, Blood Red Throne are damage incorporated, and the most fun you can have while watching your insides at the mercy of someone not exactly given to introspection.

Having toured, Europe, Mexico and the US in recent years, with visual documentation to boot, the band have been focusing on writing album number 10. However if their new mini-documentary – detailing the band in the process of putting their new album together, and having more fun than might be strictly legal – is anything to go by, ‘focus’ should be used in the broadest possible sense of the word.

“The past years we have partied a lot with so many cool people around the world,” says Yngve. “We drank so many drinks, and got so many new friends, and also we played shows. Our dear Meathook kept his camera rolling during most of the time, and during the Rona, he found time to edit a video to treat those who care, to some little entertainment while drinking alone.

“We simply have so much fun acting bad, and just want you to get a sneak peak into how undelightful we can be when we are not watched. Yeah, we forget the camera is watching us, and some of us just don’t know any better. Hope you all like it, salute and cheers, and of-course SKÅL from Blood Red Throne, and hope to party more with all you all in 2021!”