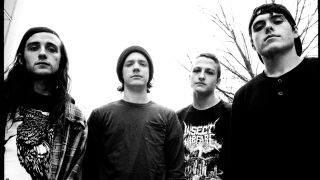 The brutal purveyors of everything horrific, Full Of Hell, are something of aficionados when it comes to noise as a genre. Here’s their guide to the bleakest and most uncomfortable music on the planet.

Spencer Hazard: “First off is a track from probably the most legendary and essential noise artist Masami Akita aka Merzbow. With Dharma, an album that was released in 2001 on Double H Industries, a sub-label of Hydra Head records, I feel as though Mr. Akita was trying to push himself and discover new sounds. With alot of Merzbow’s material, it’s mostly drones or claustrophobic walls of sound, whereas with the album Dharma it has almost a rhythm to the tracks while keeping the signature Merzbow sound. Piano Space For Marimo Kitty starts off with a slow loop of dissonant piano chords that builds into a collage of feedback and other electronic sounds thrown in. These sounds engulf the instrumentation which doesn’t reappear until the end of the track. For this era of Merzbow, it is a truly stand-out track on a very unique album.”

SH: “Some consider this one of the greatest power electronic albums to ever come out of the United States. Deathpile was the brainchild Jonathan Canady from 1995-2001. The album GR is sung as through the eyes of Gary Leon Ridgway – also known as the Green River killer. The entire album is disgusting and sickening, but the song Addicted in particular describes the inner hatred and sexual frustrations Gary Ridgway was facing during his killing spree. Canady screams perverse and misanthropic rants over a constant wall of bubbling feedback until a muffled and reverbed sound clip of one of the maniac’s survivors carries the track to it’s bleak end.”

SH: “Choosing an essential Bastard Noise track is very difficult considering the quality and quantity of their work. Bastard Noise is of course the work of Eric Wood when he was moonlighting from powerviolence heavyweights, Man Is The Bastard. Eric receives help from noise icon John Wiese on this album with additional electronics. The track Mingus Reflects is very unusual for the BN catalog as it features western instrumentation and spoken word vocals from a female accomplice. The track begins with a muffled thunder of electronics with weaving string instruments that I cannot pin-point the origin of, as the narrator speaks about not wanting to be on this Earth anymore in almost a beat poetry fashion. The narrator slowly drowns under the wall of sound until the track finally fades to a halt.”

Wolf Eyes – Stabbed in the Face

SH: “Released surprisingly enough on legendary indie label Sub Pop records, this album has become almost essential for people who wants to take baby steps into the genre. Stabbed In The Face starts slowly with electronic percussion and then just kicks you in the face all at once with distortion, vocals and feedback. With the steady drumbeat, drones of what almost sounds like a NASCAR video, the random beeps and squeals of the track can be disorientating. As soon as you think you have time to rest and the track is over it jumps right back and beats you over the head until the final squeal fades away.”

Whitehouse – Cuthands Has The Solution

SH: “The least ‘noise’ track on this entire list, but still as hard hitting as any song in this group’s catalog. This 2003 album from long running British power electronics has examples of everything sickening, depraved, depressing and disgusting about this world. Featuring production from Steve Albini on certain tracks, Peter Sotos’ sound collages of everything that’s vile, and the band’s signature use of the WASP synthesiser, the album truly has something for everyone that’s looking to feel uncomfortable. This noteworthy track however takes away all of those elements and is just simply one repetitive drumbeat with spokesman William Bennett rambling on just trying to make you feel terrible about yourself. No distortion, no feedback, no electronics, just stripped down hate. If you decide to check out this album, proceed with caution.”

SH: “One of the newer albums on this list, the Wisconsin native unleashed this track almost a full year before devastating the world with this album’s release. It takes elements of industrial, black metal, and power electronics. It starts off with a heavily distorted and manipulated sample of metal being smashed and twisting it into a tinnitus-inducing shriek, before giving you a taste of the distorted vocals that will appear on the majority of the track. The song continues on this path until there is a slight moment of levity and the sounds of gears being jammed before dropping an entire wall of thick distortion that drag you all the way to the demise.”

Dylan Walker: “This is another obvious essential for anyone looking for an introduction into the greater genre. Throbbing Gristle are considered one of the pioneers of industrial and experimental electronic music as a whole. Best known within the group is Genesis P-Orridge, whose involvement beyond TG is even more prolific and cult-like (see Psychic TV). Throbbing Gristle found their effectiveness through confrontation and depravity. This track describes a brutal serial murder as a spoken word track buried under soaring synth sounds, background noise and feedback.They always manage to come across as genuinely unsettling.”

DW: “Prurient – aka Dominick Fernow – is another more contemporary artist, but nonetheless still incredibly prolific and I’ve always been really taken by his simple and intense approach to his work. This track starts with a low crackling and blooms into what I feel is a really straight forward Prurient style attack. Intense bursts of shrill feedback and distorted vocals coat the track under continued crackling. It stays a strong wall throughout, bubbling down into low synth rumbles and crackles as the vocals continue. It feels like the work of a pained individual. Prurient, by definition is the sound of frustration and does his moniker justice.”

SH: “This short-lived ‘no coast power electronics’ outfit had quite the impact on me ever since I first heard this release. This 2010 release has sounds that bring to mind other classic harsh noise/power electronics outfits such as Richard Ramirez, Whitehouse and Slogun with its low quality production value and super distorted vocals. Featuring members of such noise infused powerviolence acts as Sea Of Shit, Socially Retarded, and Rectal Hygienics you can tell those influences come through in the vocals with low commanding barks similar to something you’d hear on an album by Infest or Neanderthal. The track Dead Weight starts off with steady grinding squeals of distortion and vocals trading off in the low bark fashion with more of a mid-range tone. This track is short, but this tape as a whole has everything you need to satisfy your noisy thirst.”

Pedestrian Deposit – Under A Veil Of Living Light

DW: “Based in Los Angeles, Pedestrian Deposit are another contemporary band on this list and the newest to our collective ears. This track is also the least punishing on the ears and is simply breathtaking. Pedestrian Deposit’s sound is essentially indescribable, and I believe that they are fully aware of their ability to go anywhere they want, sonically. In this track you can hear slow strings bowing up and down, with some background noise building atmosphere through the first portion, tumultuously pouring down into what feels like a hypnotic pit, into pounding harsh squalls and ending in an ecstatic and heavenly hum. I implore you, find this duo and listen. True modern visionaries.”

Full Of Hell are touring the UK this September. Dates below: