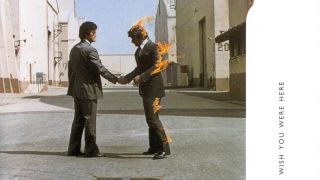 Gilmour’s guitar: Shine On You Crazy Diamond, Part II (3:54) Gilmour’s defining four-note phrase, which has colloquially become known as ‘Syd’s Theme’, is arguably the most recognisable motif of the entire Pink Floyd catalogue.

As if to underline the theme of absence on Wish You Were Here, in the time it takes Waters’ vocals eventually appear, you could have listened to the opening two-and-a-half tracks from The Piper At The Gates Of Dawn.

Electronic discordance: Welcome To The Machine (0.24)

As the second buzzer sound really disturbs the calm surface of previous track, combined with Waters’ menacing VCS3 throb, it is clear that Wish You Were Here is not simply going to be a straightforward chill-out pleasure.

Arguably the greatest combination of the salt’n’sweet of Waters and Gilmour, it demonstrates, despite whatever animosity there may have been between them, just how mutually beneficial their partnership was.

The sheer poignancy today of one departed Floyd member (Wright), paying tribute to the other (Barrett) in the album’s mournful sign-off, playing a melody line from their Syd-penned Top 10 1967 hit, See Emily Play. As the sound drifts away, it marks the last time all four members contributed so evenly to a Pink Floyd album.