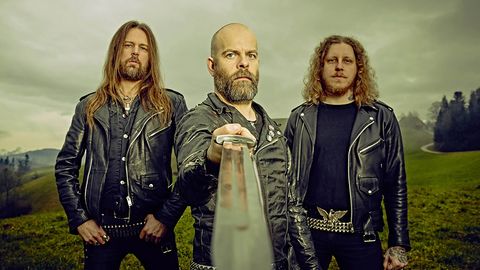 Ever since 1970 and Led Zeppelin’s Immigrant Song – in which the Thor-like Robert Plant exclaimed, ‘Hammer of the gods/Will drive our ships to new land’ – Vikings have been a popular theme in heavy metal. Iron Maiden’s The Number Of The Beast began with Invaders, a tale of marauding Norsemen (‘Pillaging!’ ‘Looting!’ ‘Raping!’ ‘Plundering!’). Swedish guitar hero Yngwie Malmsteen channelled his forefathers in I Am A Viking. Norwegian band TNT had a full-size longboat as a stage prop. And Manowar, posing in furry loincloths, spoke of their career in terms of a bloodthirsty conquest.

It was in the late 80s that the concept of Viking metal was elevated to an art form – by Swedish one-man band Bathory, the vehicle for Tomas Forsberg, aka ‘Quorthon’. On the albums Blood Fire Death (1988) and Hammerheart (1990), he created extreme metal on an epic scale, enriched with tales of Norse mythology.

Forsberg died young, from heart failure, in 2004, but the influence of those albums has carried across the decades, from the Norwegian black metal of the early 90s through to two of this year’s heavyweight releases, both of which come from Swedish bands – Amon Amarth’s warrior-odyssey concept album Jomsviking, and the evocatively named Sword Songs from Grand Magus.

Both bands have been branded ‘Viking metal’, and Grand Magus even chant those exact words in one of this album’s key tracks, Forged In Iron – Crowned In Steel. But where Amon Amarth’s style is rooted in death metal, Grand Magus, a power trio, favour a more classic approach comparable to Sabbath, Maiden, early Manowar and, at their most majestic, Dio.

As guitarist/vocalist Janne ‘JB’ Christoffersson says: “Our focus has always been on writing memorable songs.” This was a feature of the band’s previous seven albums – notably the minor classics Iron Will (2008) and Hammer Of The North (2010). And so it is with Sword Songs, where every track is a mighty anthem, save for the gentle, calm-amid-the-storm instrumental Hugr.

Christoffersson is no Ronnie James Dio. Of all the great heavy metal singers, few have ever come close to matching Dio for range and power. But in Christoffersson’s manly voice there is gravitas to fit the heavy grooves and heroic themes in songs such as Born For Battle (Black Dog Of Brocéliande) and the glorious finale Every Day There’s A Battle To Fight. Whatever the name – Viking metal, or as Manowar called it, ‘True metal’ – Grand Magus are masters of the art.