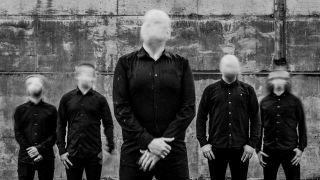 Norway's Attan are about to unleash one of the finest examples of expansive heavy music of the year. A mind-wrangling bout of hardcore aggression and doomy exploration, the Oslo five-piece merge the worlds of Converge and Neurosis with the likes of Mastodon and Conjurer.

At nine tracks and under 40 minutes long, End Of. switches from sub-three minute assaults to broader, longer soundscapes, culminating in the gorgeous title track, which is as giant as it is ambitious for a band who just 30 minutes earlier felt like a completely different beast.

Listen to the album in full below, then read this essay penned by the band for Metal Hammer, highlighting the scourge of technology and social media, and how it impacted on creating the new full-length.

I woke up to notifications again today, telling me it's someone’s birthday. It's become a habit, so ingrained in my daily routine that I hardly even notice. A scenario that is likely to sound very familiar to most folk these days. It’s weird how something as artificial as an algorithm uses our most human aspects to grab hold of us and drag us into the digital domain. “Congrats”, you type on the wall of some friend you don’t really know, already on your way to click on some link. Next thing you know you’re watching videos, one is just a little more engaging than the other. Time on site, the one currency, the only objective, and the messiah in all paths leading nowhere.

It wasn't long ago when Silicon Valley had us all believing that more communication would be the solution to most, if not all, of our problems. Nowadays that seems like a fairy tale or a horrible lie at best. And at the worst? Simply human nature, perhaps?

It’s not that by technology or social media inspired End Of., but, looking back at the themes of the record, they all have a touch of it within them. Whether it’s about the environment and our relationship with the globe, a terrorist preparing to become a self-made hero, or a filthy, no-moral preacher, trying to get his hands into the pockets of lonely elderly women – social media plays a role in one way or another. It’s just that massive, and it changes everything on a scale that we cannot begin to imagine. Or that’s the way it feels anyway. And it's great, it really is progress. But at the same time you cannot help but get frustrated with how we seem to develop all these new technologies, yet when time comes to put them to use, we end up making everything worse. Now that’s probably not true, but how can we tell? We're constantly bombarded with noise, swiftly taking away the ground beneath our feet, and with that, our sense of community and togetherness. It’s all leaving us confused, defenceless, primitive, bitter and lonesome, operating on skewed instincts totally out of touch with each other.

A song like SoMe Riefenstahl reflects on these issues. We have so many great advances in everything from psychology, to computer and communications technology, all coming together under the wing of social media, only to be picked up by all the wrong hands. Hard-working hands profiling and flooding us all with misinformation, bullshit and rubbish entertainment. All this with seemingly one objective; to undermine our societies, our democracies and sense of humanity. Full throttle, 24 hours a day. If it's deliberate or not doesn’t matter; the end result is the same.

Even though we never made plans to write an album about all this, End Of. is a reflection of the timeframe it was made. It’s inevitable, and to us that’s the way it should be. We never set out to create something far removed from ourselves: a fictional story, or a polished band package of any kind. We wanted to express ourselves through music, simple as that. In that aspect, the album is more of an inward deep dive – a sample of the life and times of five individuals and their reflections on being part of it all. We're good and bad, right and wrong, problem and solution, all at the same time.

We live in polarising times, where every step forward seems to lead to a great leap back, pushing us into tribalism and hostility. Making this record was a journey through years of chaotic dynamics moving at inexplicable speeds, leaving us with nothing but our instincts and chaos. It wears on you to a point where you start narrating your own story to get away from it all. Soon enough you cannot separate that story from the rest of them. End Of. is not about bombastic political statements, and it’s not about choosing a side and sticking to it. This album is about feeling the stress, confusion, despair and vulnerability on body and mind, and trying to come to terms with all that. It’s about trying to find something solid to hold on to, only to realise that the one thing certain is confusion itself. At times it truly feels like humanity is sucking the marrow from its own bones. If that’s the case, End Of. is the natural soundtrack to such an event. Hopefully it can challenge the listener, like it did us, to dare to be wrong, dare to be vulnerable, live, fail, learn, and repeat. You will never make the same mistake again.

End Of. will be released September 7 and is available to order from Bandcamp.