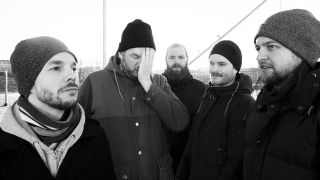 Sounds Like: The angst of black metal in its ugliest form

For Fans Of: Converge, Conjurer, Employed To Serve

“We have this phrase we like to say: ‘We’re the sound of people sucking the marrow out of their own bones,’” laughs Attan bassist Fritz Pettersen as he casually sips on his green tea. As he sits completely unfazed after uttering the most metal thing anyone has ever said, we’re pretty sure we’ll never sleep again after hearing it.

Moulded by the bleak wintery darkness of the Norwegian Arctic Circle, Attan aren’t so much a band that you can easily whack on while hoovering the flat but will more likely have you quivering naked in the foetal position in the corner. Their 2015 EP, From Nothing, was a raw helping of despairing blackened hardcore that is yet to be truly recognised outside of the underground. This vile sound is steadily crawling from the depths into the metal consciousness, stemming from the blueprint the likes of Converge and Neurosis have previously laid down.

While the thought of what sort of damage a full-length album would have on your cranium and furniture is sure to terrify insurance companies everywhere, Fritz seems to see Attan’s objective differently to what we expected while discussing the forthcoming debut.

“Playing really heavy and fast isn’t the issue. It’s not really that hard either – this is not a sport, so that’s not the challenge. For us, it’s making something that has impact. Making it interesting is as much a part of the music as the aggression,” he says, explaining how the band approached this record. “That said, aggression is important to us. I’m a firm believer in channelling aggression from the negative to the positive and that’s a really big part of this band.”

From what he tells Hammer, Norway has once again become a melting pot of creativity, as its hardcore, black metal, even jazz scenes frequently fuse, and being heavy for the sake of it is seen as constricting that creativity. Given the devastating blow From Nothing deals out, the lesson here is this: take care of the art and the heaviness will follow.

“It’s really intense,” he says, affirming the yet-to-be named album will undoubtedly shatter a few spines. “That’s the key word there: intense. That’s when we know we’re on the right path, when it’s hard to breathe.”

Though working with producer and film composer Christian Wibe, who scored the cult zombie classic Dead Snow (a film that guitarist Mathis Mathisen also worked on as a cinematographer), there have obviously been a few challenges along the way. Ferocious filth such as this thrives in a tight, condensed spaces and could potentially lose that impact if stretched too far. As proven with their seven-and-a-half-minute metallic doom march Edward, they’re more than capable of dealing out the pain over fair distances.

“When you have that fast, intense hardcore stuff, trying to make that work within the limits of say 40 minutes or so, there are some challenges. We know that this is intense music and we know that no one likes to be beaten for hours. But we had a really clear vision of where we wanted to go and it’s even beautiful and mellow at times. We ended up surprising ourselves. I’m not going to use the word intelligent, but we’ve put some thought into what we’re trying to say. So, you could say it’s a beautiful, intense beating.”

Attan will release their new album later this year