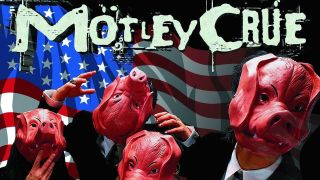 Every band has a dud record in their back catalogue – they’re only human after all. But sometimes, superstar bands make the sort of terrible albums that clog up the drains for years afterwards, leaving an unwelcome stench on an otherwise pristine back catalogue and besmirching their good names. These are the worst offenders. Warning: earplugs may be required.

On Back In Black AC/DC got everything right. But just five years later, with Fly On The Wall, they got everything wrong – horribly so. For 1983’s Flick Of The Switch, the band had taken the DIY route, and it worked. With its stripped-down, bone-dry sound and some meaty material, it’s their most underrated record. But with Fly On The Wall they lost the plot. As co-producers, Malcolm and Angus Young somehow made AC/DC sound like a tribute act on a bad night, and as writers all they could muster was one half-decent song, Shake Your Foundations. All told, a disaster.

You’d have thought the God Of Thunder would have learned a lesson from the reaction to Kiss’ four-solo-albums-in-one-day stunt back in 1978. But no – 26 years after that debacle, Uncle Gene returned with a belated follow-up that made his original effort sound like a masterpiece. The way-too-knowingly titled Asshole was an aging rock star’s predictably doomed attempt to get down with The Kids which reached a nadir just two songs in, with a fist-gnawingly bad version of The Prodigy’s Firestarter. Please, Gene – never, ever make another solo album.

When Tony Iommi calls Forbidden “a total shambles”, he’s being too kind. This is by far the worst album Sabbath ever made. It was recorded with the same line-up that had made their previous album, Tyr: Iommi, singer Tony Martin, bassist Neil Murray and drummer Cozy Powell. But there were two new faces. The album’s producer was Ernie C, guitarist for rap-metal band Body Count. His tin-pot production made Sabbath sound like a pub band. And when Body Count’s leader Ice-T rapped on The Illusion Of Power, the whiff of desperation hung heavy in the air. A low-point for this great band.

Bolton was the reigning king of AOR until this mawkish travesty of a record ruined everything. The aural equivalent of a Japanese rice cake, Soul Provider was so bland and watery it makes Adele sound like Cannibal Corpse – to say his version of Georgia On My Mind is uninteresting would be to lavish it with undue praise. Annoyingly, lead track How I Am Supposed To Live Without You helped Soul Provider sell 12.5 million copies worldwide. How did that happen?!

On paper it should have been gold. In reality this mishmash of recordings from their joint tour together in 1987 pleased neither Dylan fans nor Dead fans. Indeed it’s saddening to think that these deadening versions of seven Dylan tunes (from 1965’s Queen Jane Approximately to 1979’s Slow Train) were apparently the choice selections from the dozens of hours of live tapes they compiled. It’s even worse when one considers how many truly brilliant live Dead albums there have been, as well as several excellent Dylan live ones. If you like train wrecks, this is for you.

The Crüe’s last album of the 1990s was almost comically bad. During the making of it John Corabi was dumped and Vince Neil persuaded to rejoin the band, but was result the classic Crüe comeback fans hoped for? No it wasn’t. In fact it couldn’t have been further from that. Instead, Generation Swine was a piss-poor alternative rock record that died on its arse. From the Marilyn Manson pastiche of Find Myself to the fake-punk title track, the Crüe sounded hopelessly out of touch. The only decent song, Afraid, comes on like a post-grunge Cheap Trick. The worst, Brandon, is a sappy orchestral ballad written and sung by Tommy Lee. Vince Neil called the album “terrible”. He was right.

When going grunge on Slang didn’t work, and an attempt to recapture former glories with Euphoria failed, Leppard decided to kickstart a new millennium as the world’s oldest boy band, and made an album with people who wrote songs for Backstreet Boys, Britney and Westlife. The result was an utter shambles that managed to be both turgid and lightweight. Not so much X as X-crement.

Scott Weiland – The Most Wonderful Time Of The Year (2011)

We don’t mean to speak ill of the dead, but what was Scott Weiland on when he made this unironic Christmas album? Or perhaps it was the fact that he wasn’t on anything. Either way, the sound of one of the great rock stars of the 90s crooning his way through syrupy versions of White Christmas and Winter Wonderland was more undignified than any manner of drug busts.

At least the Keith Moon-less Who’s previous album, Face Dances, had You Better, You Bet. This risible follow-up was missing everything that had made them one of the all-time great rock bands: the energy, the charisma and the songs. Forget the title – It’s Hard was woefully flaccid.

No, not the Beatles album. This is the soundtrack to the flop movie that emerged 11 years after the Fab Four’s masterpiece. Sure, stars Peter Frampton and the Bee Gees were huge at the time, but that didn’t mean people wanted to see them on the big screen – nor did they want to hear the likes of Steve Martin, George Burns, Alice Cooper and Paul Nicholas murder their favourite Beatles tunes. John Lennon was spinning in his grave – and he wasn’t even dead yet.

Sammy Hagar helped take Van Halen to heights they’d never reached with original singer Dave Lee Roth. But Hagar’s own replacement, former Extreme singer Gary Cherone, did the exact opposite and took them to the lowest point of their career. The sensitive Cherone was hardly the sort of party-hearty frontman Van Halen’s musical pyrotechnics cried out for, and their sole record with him was the kind of bloodless, bland rock you’d expect from those bands who used to trail in VH’s wake. Like Extreme…

By 1995, Fleetwood Mac had lost its two biggest stars and best songwriters, Lindsey Buckingham and Stevie Nicks. Foolishly, the band carried on with a fake Buckingham and Nicks – Bekka Bramlett and Billy Burnette. The result was an album so bland, so inept, that it failed to make the US top 200. Two years later, Buckingham and Nicks were back.

The late Keith Emerson once described Love Beach as “like diving into a wet sponge.” He was overselling it. After the glorious excesses of the early 70s, this was supposed to be the prog giants’ attempt to get back in touch with reality, dialing back the overblown musicianship in favour of a much direct approach. That they didn’t manage that is no crime – but the fact the resultant album, housed in a sleeve that featured the band kitted out like the Bee Gees’ less cool older brothers, was utterly bereft of energy, inspiration or madness was. The last dying fart of 70s prog.

One of America’s greatest rock bands ended its career on a miserable note. Creedence mainman John Fogerty was a brilliant songwriter, but by ’72 he was burned out and utterly bereft of inspiration. Mardi Gras was so lousy that Rolling Stone reviewer Jon Landau delivered this grim epitaph: “The worst album I have ever heard from a major rock band.”

In fairness to Billy Idol, he truly immersed himself in the world of cyberpunk before making his fifth album, recruiting a raft of experts to help realise his futuristic vision. Unfortunately, what came out was more Clive Sinclair than William Gibson – a muddle-headed mish-mash of hokey samples, amateurish electronic flourishes and, in the case of his astoundingly bad cover of the Velvet Underground’s Heroin, the sort of dad-at-the-disco techno-dance that should have been left in the laboratory. Far from being a brave new world, the album pretty much killed his recording career for more than 20 years.

Ol’ Shakey has built a career on the principle of doing whatever he wants, so there are bound to be a few turkeys lurking in the backyard. Most date back to the 80s, a decade when he often seemed out to please no one but himself. The flaccid, Vocoder-driven Trans and synth-heavy stadium rock of Landing On Water particularly aggravated his label, Geffen, but it was 1983’s Everybody’s Rockin’ that truly got their goat. A big ‘fuck you’ to the label when they rejected his country album, Old Ways, this was 25 minutes of plastic rockabilly. The label responded by suing him. Truly, there were no winners here.