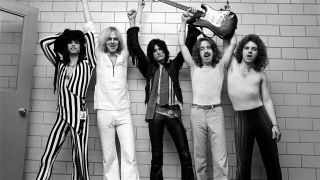 It’s probably crucial to Aerosmith’s popularity that they had to work for their success, carefully stitching together the threads of their previous experiences to become what guitarist Joe Perry likes to think of as “the ultimate party band”.

Perry and bassist Tom Hamilton brought to Aerosmith the freewheeling blues improvisation that had been so much a part of their old Jam Band, while vocalist Steven Tyler had an instinctive understanding of tight R&B dynamics. It would be an explosive combination, but things didn’t happen overnight; or even when Columbia Records supremo Clive Davis signed the band to a £125,000 deal after seeing them play the legendary New York venue Max’s Kansas City.

Debut Aerosmith, released in 1973, didn’t chart nationally (although the first single, Dream On, nudged the Top 60). It was when the group took time out from a string of support tours to record their follow-up album, Get Your Wings, in New York’s Record Plant studios, that Hamilton came up with an idea that would eventually turn into Sweet Emotion, one of Aerosmith’s most revered songs.

“I undoubtedly had a smoke and started playing my guitar, and that opening bass riff popped out,” he recalls. “It didn’t strike me as anything special – the melody is so simple and basic – but it stuck in my head and I kept going with it. I remember showing it to Steven. We were in the middle of developing material for Get Your Wings, and I blurted out: ‘Listen to this’.”

Tyler saw the potential of the riff, albeit differently to Hamilton: “When Steven was hearing something that he thought should be on the down beat, I was hearing it on the up beat. We tried rehearsing it his way, and to me it sounded fucked up, cos I was so used to playing it the other way. Then it started growing on me.”

Released in 1974, Get Your Wings stalled at No.74 in the US chart, but by then Aerosmith were already at work on songs for their third album, which became the superstar-making Toys In The Attic. By now Hamilton had added to his Sweet Emotion bass riff: “There’s a part after each verse, where the band kinda jams out for so many bars. That I came up with because when we all lived together, back before we ever had a record contract, there were certain records we listened to in our apartment. One was Jeff Beck’s Rough And Ready album. I really loved the funky energy of the bass playing on that record, and I guess I was trying to do my version of it.

“Then I wrote the guitar part. Again, for months and months, I was the only one who ever heard the song. I kept that in my back pocket. Maybe I’m just a self-doubting kind of person.”

Returning to the Record Plant, they “did all the material that had already been put together for Toys In The Attic. It was one of the peak experiences of my time in the band. We felt that we were growing into the studio; we were really progressing.

“We had all the basic tracks down for the other songs, and Jack Douglas, the producer, said: ‘You’ve got an extra day booked. Anybody got any spare riffs?’. I said: ‘Yeah, I do.’.

“Steven remembered it. As for the others, it was, ‘Hey, that’s pretty cool’, or whatever. We just tried it out. The best songs start out as little tidbits. We didn’t know the magnitude of it until later. Not until later do you think: ‘Oh my god, that came out fucking unbelievably’.

“Joe and Brad [Whitford, guitarist] learnt the parts I’d written, and expanded on them. That whole intro, and the way Joe plays on it, is something I’ve always loved. I’m a huge Led Zeppelin and Who freak, so I’m a sucker for a rock song that starts out with a quiet, dreamy, shadowy beginning and then bursts into some huge thing.

“At the end of the song it gets really heavy. That’s Steven’s idea – the intro riff turned into a monster, basically. When we got our tape and I heard Sweet Emotion, I freaked out. I loved it, although I didn’t understand half of the lyrics.”

Not only did Toys In The Attic fly up to No.11 in the US after its spring 1975 release, Sweet Emotion also crashed the Top 40, issued as a single with another Hamilton/Tyler co-write, Uncle Salty.

“That was an unbelievable feeling,” Hamilton says of …Emotion’s single success. “I was finally on the scoreboard.”

From here on in, Aerosmith became a headline band, filling ever bigger venues, although it would take the UK another 12 years to catch on properly. As for Sweet Emotion: “We’re still playing it,” Hamilton says, “and I’m grateful every night for the audience reaction to it. There’s the troika – Dream On, Sweet Emotion and Walk This Way – and we move them around. The last two or three years of touring we’ve mostly closed with Sweet Emotion. “I love that a song that’s very simple could express that much.”

This was published in Classic Rock issue 88.