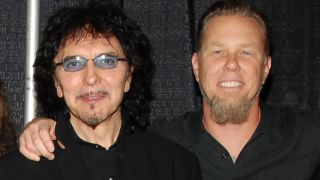 Tony Iommi and James Hetfield at The Rock And Roll Hall Of Fame in 2006 (Image credit: K Mazur/WireImage - Getty)

It was reported on Saturday that James Hetfield had re-entered rehab, resulting in the postponement of Metallica’s tour of Australia and New Zealand.

The guitarist says: “My best goes out to James Hetfield. You’ve done the right thing seeking help. I’m thinking of you my friend and wishing you all the very best on your recovery.

“Looking forward to seeing you back at your best very soon. Your pal Tony.”

The friendship between Iommi and Hetfield goes back years, with Metallica also inducting Black Sabbath into The Rock And Roll Hall Of Fame in 2006.

Announcing the news last weekend, Metallica said: “We are truly sorry to inform our fans and friends that we must postpone our upcoming tour of Australia and New Zealand.

"As most of you probably know, our brother James has been struggling with addiction on and off for many years. He has now, unfortunately, had to re-enter a treatment program to work on his recovery again.

“We fully intend to make our way to your part of the world as soon as health and schedule permit. We’ll let you know as soon as we can.

“Once again, we are devastated that we have inconvenienced so many of you, especially our most loyal fans who often travel great distances to experience our shows.

“We appreciate your understanding and support for James and, as always, thank you for being a part of our Metallica family.”

Metallica's other future plans are still on schedule, including a charity concert in March 2020 to raise money for the band's All Within My Hands Foundation, a series of South American dates in April, and the Global Goal Live show in September.