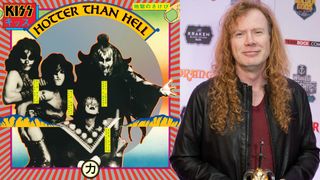 I was a little pothead so I did a lot of bartering and trading albums for pot, but the first rock record I had was Kiss’ Hotter Than Hell, but I didn’t really pay for it!

The album cover drew me to the record. Looking at the cover on the front I thought it was hideous artwork until I turned it over and saw Gene Simmons sitting in the throne holding a topless girl with a star over her nipple. I thought, ‘This is gonna be great!’

Kiss’ in your face attitude that Gene’s always had really attracted metalheads. A lot of people misunderstand him, he’s extremely extremely dry, and I think that just pushing things over the edge is very metal. One of the songs that I really dig is Parasite – just the riff! It’s so down and dirty and at the time nobody was really doing that kind of stuff. You had Deep Purple, you had Zeppelin and stuff like that that, but in terms of big bands that people knew about there was nobody like Kiss. And Kiss were still quite underground at the time, but they had the formula that just sucked you in. You either loved them or you loved to hate them.

Ace Frehley was a huge influence on me as a guitar player. The first couple of times I got together with a couple of times to play music together, there were several Kiss songs that we’d play. Megadeth actually covered a version of Strange Ways. We covered it in rebellion to something Gene had done. We were interested in doing something for the Kiss My Ass record, but they didn’t want to do any of the songs written by members that weren’t Paul or Gene. I thought fuck that. I know why they’re doing it, I’m a musician, I know about publishing. I said we’d do it but I wanted to do Strange Ways because that was Ace’s song and they said no.

I remember we had just played with Kiss in Wyandotte, which is really far removed city in the Midwest, and their manager said they wanted to take a picture with us and I had to pinch myself. They’ve got their meet and greet where people pay $100,000 to take a picture with them for three seconds, and all of a sudden I see this Amazon dude stomping through these mortals. He’s 10ft tall with a giant black wig on, and here comes Paul Stanley. He said ‘Hey Dave!’ which was so surreal – 13-year-old Dave would be cumming in his pants right now because Paul Stanley knew who he was. We shook hands and talked, then he went off to do his thing, and I thought it was one of the greatest things in the world.

Megadeth’s album Dystopia is out now through Tradecraft/Universal.