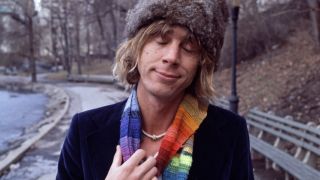 When we meet in his manager’s flat in West London, Kevin Ayers greets me with: “The last time we met I believe I corrupted you.” Not quite. It was in old Amsterdam, 1975. After a couple of bottles of red, Ayers had decided a trip to the fleshpots was in order, via the famous brown cafes. Two virile young Englishmen abroad with time and gilders to spare…

Today Ayers is a well-worn 64. He still has most of that long blond hair and all of that rich, deep voice. He’s wearing a hippie kaftan shirt, faded denims and Ellesse sneakers. He is bronzed from his lengthy sojourn in the South of France. Though he hasn’t lived in the UK for 35 years – “I think in French” – he’s back in Britain to promote a splendid new compilation, Songs For Insane Times, chronicling his solo career from 1969’s majestic Joy Of A Toy to his final Harvest Records album, That’s What You Get Babe, featuring his original band Soft Machine, Syd Barrett, Elton John and a host of fine English players from the ‘alternative’ scene.

Clutching a beaker of Stolichnaya vodka and pawing roll-up Gauloises, Ayers describes the four-CD set as “a history book, the story of my life. The songs are my children, sent into the world for better or worse. I’m pleased with those that pass the test of time. They convey a feeling which isn’t clichéd.”

Notoriously self-effacing, Ayers regularly gets so nervous before interviews that he throws up. On a recent visit to New York he was constantly courted by young bands, such as Arcade Fire, who revere his work, and that really flipped him over. “I had to dash,” he laughs. Strange, perhaps, because Ayers has packed his life full.

Born in Herne Bay, he was a private Catholic school boy who then moved to Malaysia and attended a Koranic Muslim school. As a teenager he spent a year busking in London, living in squats and enduring dope busts, before returning to Kent to hook up with the Canterbury folk: Robert Wyatt, Mike Ratledge, Daevid Allen, Brian and Hugh Hopper – the nucleus of Soft Machine.

An essential British psychedelic pioneer, Ayers was a close ally of Pink Floyd. “We played with them dozens of times 1966-1967 – did all the UFO on Tottenham Court Road ‘happenings’, shared acid trips, guitars and girlfriends,” he smiles.

In 1968 Soft Machine were chosen by Jimi Hendrix to accompany him on a three-legged tour of America, splitting opening status with Eric Burdon And The Animals and sharing stages with everyone from Todd Rundgren and Albert King to the Troggs and the MC5.

How great was that? “Amazing. Too amazing. My first trip to the States, and then playing with Hendrix. To have girls coming up and saying: ‘I want to fuck you,’ while they grabbed your cock. Er, that didn’t happen in England too often. Not without dinner.”

Ayers and Jimi became close. “We socialised a lot. We dined together frequently and we lived in the Chelsea Hotel in New York on the same floor. It was just glorious watching him from the wings. He liked us cos we were weird and not pop, and no threat. He was a lovely guy – much abused by management and the music business. Plus his so-called friends stole everything he had, including his soul. The tour was a guns and briefcases affair. Everything was paid in cash, which made one an instant target.”

After the tour’s final shows, Hendrix sacked the Experience and Ayers parted company with the Softs. “I didn’t like the mechanical aspect. It was an eye opener seeing all the money slosh around while Jimi was being ripped off. His disillusionment did me a favour. I didn’t like the party. Plus Robert and co. wanted to go in a jazz direction. I was a simple pop singer. Later Robert wrote to me and said: ‘You were right.’ But it was amicable. I owe them and The Beatles for my education, since the only record I’d heard post-Malaysia was The Sound Of Music.”

In 1969 Ayers composed the Joy Of A Toy album on a Danish Beochord, a primitive tape mixer, and took it up the stairs of EMI’s Manchester Square HQ. He landed on his feet at EMI imprint Harvest Records where a vibrant team of youngsters were hell-bent on shouting “This is the future” to the old chaps at EMI.

“It wasn’t, quite. One didn’t get much family support, which I’d enjoyed with my band. We learnt fast playing with Pink Floyd. Except, damn them, they always sounded better than we did. Either they had a brilliant sound engineer or an innate sense of theatrical sound.”

Yet his Harvest stablemates were in disarray by 1967. “Syd. A kindred spirit. I wrote songs about him because he had such a profound effect. He was losing it really fast, too. And not just because of drugs. It was a sanity thing. He would have gone mad whatever. But he had a brilliant, original talent, one that launched Pink Floyd and English psychedelia. He was their soul. He was also a part of that whimsically inspired English pop culture, which is why he’s still idolised.”

On the solo circuit, Ayers ran into David Bowie, fresh from the Lindsay Kemp mime school. “He was a dancer then but he had brilliant songs. People say I influenced his David Bowie and Hunky Dory albums, which is probably true. If so it was a mutual affair. I still hear people nicking my riffs. So what? This is a borrowing profession.”

Rock star trappings never appealed to Ayers: “It’s true my attitude doesn’t suit the industry. I’m not into fame or ego. I’m crap at anything other than my music. There should be room for people like me. Sometimes I bowed to greater pressures,” he remarks, referring to the infamous album and concert called June 1 1974, when Ayers was part of a bizarre supergroup featuring Velvet Underground legends John Cale and Nico and Roxy Music’s Brian Eno. Ayers’s then-new label, Island Records, wanted him to wear leather pants and crocodile shoes. “I felt out of place. That group didn’t have much musical merit. I thought it was crap – it was all rushed out. John Cale was a different number, a businessman, like Lou Reed. Ditto Brian. Nico was sweet but barmy. They had some strange habits.”

Given his peripatetic existence, Ayers feels he’s never fitted the slot. In the mid- 60s he lived in Majorca with the poet Robert Graves and enjoyed numerous society flings, including one with Bianca Pérez-Mora Macías before she met Mick and became Bianca Jagger. “I had a mattress and a stove and a guitar so I was happy then. I’ve always loved women; I need a female muse, which is why I can’t write now. My last album, The Unfairground (2007) may be my last hurrah.

That would be sad. “It is because – and I love this word – I am a troubadour. I need the energy that love gives one, the sex and the affection. I crave… what’s the word… espiritu.”

There is much to admire about Kevin Ayers. He’s a one-off. If you’ve never heard any of his music, then you should check out Insane Times for the sunshine and smiles within.