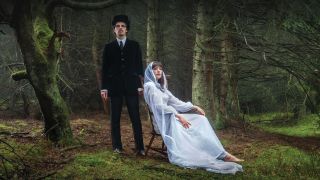 The benefits of regular exercise are well documented. In Jarrod Gosling’s case, a daily run around the picturesque Damflask Reservoir, just west of his native Sheffield, helps get both mind and blood pumping. “It gives me a lot of time to come up with ideas,” explains the instrumentalist, best known for his work in electronica duo I Monster, alongside the more prog-leaning Regal Worm and Henry Fool. “In late 2014, I started thinking about doing a psychedelic thing, with eerie female choral vocals, using just organs. A lot of people use synths and guitars for that kind of thing, but I wanted something different.”

Keen to collaborate with someone further afield (“We tend to have this incestuous musical thing going on in Sheffield”), Gosling contacted his London-based actor friend, Paul Putner, for suggestions. Putner put him in touch with local singer, arranger and clarinettist Cecilia Fage, of Matt Berry & The Maypoles. “Jarrod and I sent each other some of our own music by email and we knew that we had good chemistry,” she recalls. “We had loads of the same reference points. Soundtracks came into it quite heavily, stuff like Valerie And Her Week Of Wonders [1970 Czech horror film].” Adds Gosling: “We wanted the vocals to be quite acid folky, like Linda Perhacs or Vashti Bunyan. And we talked about people from the late 60s and early 70s – Fotheringay, Mellow Candle, Trees.”

The upshot is their self-titled debut as Cobalt Chapel. Not only is it a fitting testament to the above influences, the album is a glorious extension of psych folk tradition, its telluric themes of innocence and disquiet wrapped in Fage’s ghostly choral tones and the creepy chug of Gosling’s array of vintage organs. It feels like a seductive soundtrack to a forgotten Hammer flick. Indeed, the protagonist of Horratia, co-written with Putner, is an aging B-movie horror actress. Another song, Black Eyes, is told from the perspective of a female character from The Stepford Wives. “So often these days, horror films go for the big shock and gore,” Fage says. “But The Stepford Wives has this slow, creeping dread, where everything feels normal for a long time. Then you peel back the skin of suburbia and find this horrific thing underneath it. That was the inspiration. I suppose it’s to do with the fear of normal family life and what can lie behind it in an imagined circumstance.”

Despite the fact that they’ve only just released the album (adorned with a great photo of Cecilia, heavily pregnant with twins, staring out from a thicket in Highgate Wood), the pair are already itching to start work on a follow-up. Fage would like to add some clarinet and flute next time around. Gosling, meanwhile, is always foraging about for vintage gear. “We’ve been talking about how we can develop the sound,” he says. “I had four or five organs during the making of the album and now I’ve got 12. I even bought some bagpipes last week!”

Cobalt Chapel is out now on Klove