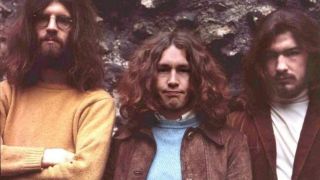 The death of drummer Clive Brooks last week will be particularly felt in the extended Canterbury scene community where his work with Egg endeared him to fans around the world. News of his death came via Pink Floyd’s Nick Mason who posted on social media, “With a heavy heart our Pink Floyd family say farewell to dear Clive Brooks, drummer for Egg and later drum technician extraordinaire, who sadly passed away.” In addition to spending time in The Groundhogs in the mid-‘70s and later, several years as Mason’s drum tech in Floyd, Brooks was also a valued member of Leonard Cohen’s live team between 2008 and 2010 and also enjoyed stints working behind the scenes for acts such as Jeff Wayne’s War Of The Worlds, Toto and The Australian Pink Floyd Show. However, it’s his crisp, incisive drumming in Egg for which he’s best remembered, with tracks such as A Visit To Newport Hospital, being especially revered in progressive music and Canterbury circles.

Along with Dave Stewart (keyboards), Mont Campbell(bass) and guitarist, Steve Hillage, in 1968 Brooks co-founded Uriel who soon morphed into Egg when Hillage quit for university in Canterbury. Writing about that period in the liner notes to the archival Egg release, The Metronomic Society (2007), Brooks recalled, “When Mont started introducing irregular metres into the music, I thought ‘this is going to be an underground type of band, I don’t think we’re ever going to be all that popular.‘ When Steve was in the band there were lots of songs that rocked along, but it became clear that Egg was going to be something totally different. I quite enjoyed the challenge.”

Signed to Decca in 1969, the extent of that challenge can be heard loud and clear on their two Deram albums Egg (1970) and The Polite Force (1971), as well as The Civil Surface, recorded for Virgin in 1974 after the band had formally broken up two years earlier.

While Stewart and Campbell used a combination of chord symbols and full notation, Brooks didn’t read music and devised his own method of notation which Dave Stewart described as “long lists of numbers, some circled, with dots over the top, undecipherable to anyone but him.”

That tenacious grasp of Egg’s complexities added both definition and bite, providing not only a rhythmic anchor points but a propulsive commentary that ramped up the drama. Examples of his studied, disciplined approach are found all over Egg’s output but tracks such as The Song Of McGillicudie The Pusillanimous from their debut album, Long Piece No.3 from The Polite Force, and Germ Patrol and Enneagram from The Civil Surface are simply outstanding. His capacity to make abrupt time changes somehow flow and swing, coupled with a surgical precision has frequently drawn favourable comparisons to the likes of more high profile players such as Bill Bruford.

With Stravinsky as one of his favourite composers, there were some raised eyebrows when, after the break-up of Egg, Brooks joined The Groundhogs in 1972. Yet Brooks’ work is exemplary on the severely underrated Hogwash (1972) and Solid (1974). After the dissolution of The Groundhogs, Brooks embarked on his career behind the stage. Brooks’ blend of force and subtlety won him many admirers but perhaps Dave Stewart summed up his ex-bandmate best noting in that Clive’s playing possessed “clarity, excitement and power.”