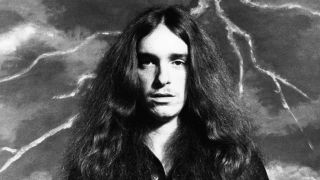 On September 27, 1986, the metal world lost a giant. Cliff Burton died at the age of 24. Malcolm Dome and Xavier Russell, two people who knew him, reflect on the man who's become a legend...

There’s no doubting that Cliff Burton was a huge part of Metallica’s success in the mid-80s. But, in the 28 years since his death, the bassist’s myth has somewhat overtaken the reality of the person and the musician. But what was he really like offstage? The two of us hope this will give you a little insight into his personality, and make you understand his impact on Metallica and metal…

**MALCOLM DOME: **You met Cliff before me, didn’t you?

XAVIER RUSSELL: The first time I ever saw him was in October 1982, when Metallica opened for Lääz Rockit in San Francisco. He was in the crowd. Ron McGovney was still playing bass for Metallica at the time, and Dave Mustaine was also with them. Someone pointed Cliff out to me, and said he was in a band called Trauma. But I didn’t talk to him at that gig.

MD: That was about five months before he played his first show with Metallica, in San Francisco, with Lääz Rockit again on the bill.

XR: You could tell back then that Metallica weren’t happy with Ron The Guv’nor. And there were already rumours that they were gonna bring Cliff in.

MD: I actually didn’t meet him until just before Ride The Lightning came out. The band were at a festival in Belgium. It was the Heavy Sound festival in June, 1984. They were scheduled to sign to Bronze Records, who brought over a big bus to make a fuss about getting the band’s. And I vividly recall Cliff staring at the bus and saying, “They don’t get what we’re about, do they?”. The deal was never signed, and Ride The Lightning ended up on Music For Nations.

XR: Cliff was very much his own man. He wouldn’t conform to the way everyone expected him to dress and behave in the thrash scene. He always had on bell bottoms and usually wore a Blue Öyster Cult T-shirt. Or a band like Lynyrd Skynyrd. I never saw him in a Venom shirt, for instance. He loved bands like Skynyrd and BÖC. And didn’t care what other people thought about him. That’s the way he dressed. That’s what he listened to, and he wasn’t gonna change for anyone,

MD: You got the feeling that the other members of Metallica looked up to him. Well, he was slightly older than the rest of them.

XR: He was really the heart and soul of the band, and musically he certainly guided them a lot. If Cliff didn’t like an idea, then Metallica would probably dump it. He was crucial to them.

MD: But it went beyond music. The others seemed to look to him for guidance. I remember Lars moaning at the Day On The Green festival in San Francisco, 1985 that the rest of the band had girlfriends and he didn’t. He asked Cliff why that was. He just stared at Lars for a second and then just said, “Look in the mirror!”. Later Cliff told me that Lars was always complaining about something, and that was probably why he irritated some people. “But I’ve got a lot of time for him,” he then added. “Lars is a good guy”.

**XR: **One of the coolest things I ever saw Cliff do was when the band played Monsters Of Rock in 1985 at Donington. I was at the side of the stage during their set, and someone threw an apple into Cliff’s bass bin. He grabbed this, took a bite out of it, and threw it straight back to the person who’d originally thrown it onstage.

**XR: **I’m sure it was. Which is some feat when you consider how many people were there, and that Cliff was concentrating on playing the gig at the time!

MD: He had a great sense of humour too. Loved a good wind up. At the Heavy Sound festival I mentioned earlier, there was a band called Faithful Breath on the bill. They were dressed up as vikings, and looked ludicrous. But Cliff commented to Lars: “We should dress like that. It would get us attention”. Lars looked at Cliff incredulously, and couldn’t work out whether he was joking. Cliff had that deadpan face. And then he added: “No, I am being serious!”.

**XR: **He never followed any rules, did he? His bass solos were always really special, because he simply played whatever he felt like at the time. And, let’s face it, a bass solo at a thrash gig was very rare. But everyone looked forward to Cliff doing one.

MD: Cliff always seemed to be looking ahead to the next gig or album, rather than sitting back in satisfaction. I do remember the morning after the band did the Monsters Of Rock festival in ‘85, he listened to Lars enthusing to everyone about how great the next Metallica album was gonna be. That was Master Of Puppets. But Cliff refused to be drawn on how it was gonna sound, even though it was just an amiable chat and not an interview. “I wish Lars wouldn’t go round telling everyone that we’re gonna change the world. Our aim is to do the best we can. Then it’s down to everyone else to judge it. I never judge any music. I just want to enjoy the experiences we’re having now.”

XR: When Cliff died, Kerrang! asked me to write an obituary. I headed it Trapped Under Ice, and wrote it in a semi-jokey fashion. But the magazine refused to run it, because it wasn’t respectful enough, so they claimed. But Cliff would have loved that sense of humour. I mentioned it to Lars some time later, and he agreed that Cliff would have laughed at something like that, and thought it was very appropriate.

MD: I think that’s because people have the wrong impression of Cliff. He’s being beatified as some sort of metal saint. They have forgotten about the person over the years. But I am going to be controversial here and say that when he died, a part of Metallica did as well, and it never returned. They weren’t the same after that.

XR: You have to wonder how Cliff’s death affected them. James, for instance, seemed to take on Cliff’s mantle of loving southern rock. And, it may be an odd thing to say, but of all the albums the band have done since, I think he’d have appreciated Load most of all. Because it was so diverse, and Cliff had a wide ranging musical taste and knowledge. You’d think that, had he lived, Cliff would have encouraged Metallica to go in that sort of musical direction.

MD: His impact on everyone can be measured by the fact that, when he died, it shocked everyone in the Kerrang! office the next day. We were all a little lost. It was the first time anyone’s death had affected us all.

XR: I don’t feel Metallica ever truly came to terms with Cliff’s death. They never seemed to be as close knit again. It was as if Cliff held them all together, and without him the rest lost a bit of touch with each other.

MD: I’ve never said this publicly before, but after the band’s show at Hammersmith Odeon on the Master Of Puppets tour, I remember a brief conversation Cliff had with me and one other person. It was about how we all wanted to be remembered after we died. Cliff just said, “I’d like people to think I was a good person who always did his best. But I won’t need that for a long while”. Less than a week later…