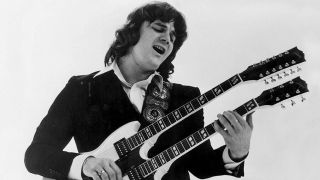 Some people call him The Space Cowboy, some call him The Gangster Of Love. Others know Milwaukee-born Steve Miller’s commercial transition to superstardom thanks to his hit singles The Joker and Abracadabra, but there is more to this guitarist/singer/songwriter/bandleader than slick 70s/80s FM hits.

Miller’s background is unusual. His liberal parents were friends of Les Paul and Mary Ford, who gave six-year-old Steve guitar lessons. When the family moved to Dallas, T-Bone Walker was another house guest who taught Miller the blues. “He showed up in a pink Cadillac convertible with leopard-skin seats,” Miller remembers. “I took a look and thought: ‘When I grow up, that’s what I wanna do.’”

Aged 14 he was in Chicago with a high-school band backing Jimmy Reed, and later jamming with Paul Butterfield, Muddy Waters, Howlin’ Wolf and Buddy Guy. He studied literature at universities in the US and Copenhagen, then borrowed dad’s VW hippie wagon and drove to San Francisco in time to catch the Butterfield Blues Band and Jefferson Airplane at the Fillmore auditorium, and befriend Jimi Hendrix at the Monterey festival.

His views on the West Coast scene were harsh. “There were a lot of ‘folk musicians’ who’d seen A Hard Day’s Night and wanted to be pop stars, but they couldn’t earn twenty-five dollars in Texas. I’d already played two thousand gigs before I got to Frisco. I wasn’t impressed.”

After backing Chuck Berry at the Fillmore, the Steve Miller Band signed to Capitol and released a straight run of brilliant psychedelic blues albums with English producer Glyn Johns, culminating in the epic Recall The Beginning…A Journey From Eden.

Despite good album sales SMB received scant airtime until The Joker came along. Fame and fortune followed, and in recent years Miller has concentrated on old blues favourites. And he is ever recalcitrant.

After being inducted into the Rock And Roll Hall Of Fame in 2016, in an interview with Rolling Stone he said: “This whole industry fucking sucks and this little get-together you guys have here is like a private boys’ club and it’s a bunch of jackasses and jerks and fucking gangsters and crooks who’ve fucking stolen everything from a fucking artist.”

CLASSICS – EVERY HOME SHOULD HAVE THEM

The Steve Miller Band’s second album features the classic line-up of Lonnie Turner (bass), Jim Peterman (keyboards), Tim Davis (drums) and Boz Scaggs, whose guitar and vocals thrash out Overdrive and Dime-A-Dance Romance. The sarcastic Living In The USA and slinky groupie ballad Quicksilver Girl, written about Julia Dreyer (the Girl With No Name on The Byrds’ Younger Than Yesterday) stand out, as does Johnny ‘Guitar’ Watson’s Gangster Of Love with its shuffled breakdown beats. Opener Song For Our Ancestors is topped and tailed by booming San Francisco Bay foghorns, and driving-rain effects resonated in the UK long before Pink Floyd’s Echoes trip.

Recall The Beginning… A Journey From Eden (Capitol, 1972)

Even in a golden year this is magnificent. The blasting horn intro on Welcome ushers in the doo-wop Enter Maurice, chased down by the groove soul of High On You Mama and the ambition of Somebody Somewhere Help Me.

But it’s Side Two’s four-song suite where this journey locates the cosmic motherlode. Love’s Riddle and Fandango emerge from relationship turbulence before Miller hits the stratosphere on Nothing Lasts and the title track, his greatest song on his greatest album.

The album was completed on a total eclipse of the Moon. Far out.

Glyn Johns was hired as engineer, but after six weeks of “dicking around doing nothing” at Olympic Studios in London he persuaded Miller to give him control. The result was a spectacular Chicago-meets-Swinging London blues epic encapsulated by the The Beauty Of Time Is That It’s Snowing (Psychedelic B.B.), a crazy trip with street-chattering dolly birds, seagulls, glorious vocal harmonies and Mellotron. The zonked mood is hammered home by underground poster artist Victor Moscoso’s lysergic cover art completing the complete DayGlo experience.

Out go Scaggs and Peterman, enter polymath jazzer Ben Sidran, co-writer of the elegant blues Space Cowboy that lifts the riff from Lady Madonna to underpin a typically sardonic lyric.

Mainlining his Anglophile leaning Miller inspired pianist Nicky Hopkins to provide his best playing this side of the Stones’ Sway on the crescendo build up of Kow Kow, while Paul McCartney (credited as Paul Ramon) plays bass and drums and adds his best Little Richard rasp to My Dark Hour. Macca had just had an almighty fall-out with John Lennon during the sessions for Oh! Darling and vented his frustration here, much to Miller’s delight.

Miller’s country album relocated him to Barefoot Jerry’s Cinderella Sound in Nashville with locals Wayne Moss, Charlie McCoy, Buddy Spicher and Bobby Thompson. From this safe haven Miller delivered his most political messages via Industrial Military Complex Hex, Jackson-Kent Blues and Never Kill Another Man, written in the aftermath of the USA’s invasion of Cambodia. They rival MC5 for righteous anger.

His big kiss-off to the hippie era coincided with closure on the original SMB sound, although he dusts off old Scaggs collaboration Going To Mexico, arguably his toughest blues.

In which Miller becomes an arena-filling space-rock guitar god on the Native American title track, the Dallas outlaw ditty Take The Money And Run and deliberate crowd pleaser Rock’n Me, designed around Free’s All Right Now and premiered for a British audience when the Steve Miller band supported Pink Floyd at Knebworth in July ’75.

Operating as a trio, SMB entered the phase where newfound fame caused old fans to believe Miller sold out, and anti-FM types to disparage him utterly. Haters gonna hate, but Miller took platinum sales to the bank. Joe Satriani loves this album. He’s right to do so.

Psych-blues may be long since gone, but good-time whimsy prevails on the ear-worm title track (which didn’t chart in the UK on its ’73 release, but reached No.1 in 1990 on the back of a Levi’s 501 ad ), although Miller retained credibility with an acoustic live take on Robert Johnson’s perennial blues classic Come On In My Kitchen, and Evil, captured in Philadelphia and Boston.

This album is probably where you hear Miller deciding that if you can’t beat ‘em, join ‘em as he pursues the big bucks and succeeds. Maybe he would never be as vital as he had been before, but he was calling the shots at Capitol Records – who doubled his royalty.

Having paid his dues, Miller returned some to Jimmy Reed on this underrated album, notably covering Ain’t That Lovin’ You Baby, and delivering his strongest original in ages in the shape of I Want To Make The World Turn Around. Hardly revolutionary, this was prime Miller-lite but eminently quaffable.

Better still, the old gang were back in town, with bass player Gerald Johnson and drummer Gary Mallaber keeping the guitar man on his toes. Other top sidemen are saxophonist Kenny G, Norton Buffalo on harmonica and Les Dudek, whose Dobro playing keeps the lazy Behind The Barn choogling along.

A modern influence comes from vocalist Sonny Charles, guitarist Jimmy Vaughan and Joe Satriani, former Santana percussionists Michael Carabello and Adrian Areas provide the Latin feel, and Miller’s long-time harmonica player Norton Buffalo is the most featured soloist. While Miller didn’t write anything here, the results are better than expected since his own singing is still mellow and spacey.

AVOID – THE ALBUM THAT SHOULD NOT BE

Side one of Circle Of Love passes muster – only just – but the inclusion on this record of the futuristic, vaguely political disco dub Macho City doesn’t work. Stretching to more than 18 minutes long on the original album, it wanders into realms of tedium, even if the helicopter and storm noises are engaging.

Oddly, the track has achieved some kind of cult status among hipster house samplers such as Joey Negro, who dug Gerald Johnson’s funky bass line and drummer Gary Mallaber’s slinky rhythms. Even so, this isn’t the first album to turn to; even the cool rock’n’roll Heart Like A Wheel sounds too pat. Steve Miller in sleep mode.

Steve Miller Q&A: “I don't use my life to sell records. Who cares what I do?’