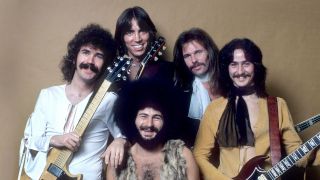 The story of Boston is the story of one man and his pursuit of perfection. For Tom Scholz, the leader of the group since its inception in the mid-70s, music is not just a vocation, it’s an obsession. It was his genius – as a songwriter, arranger, multi‑instrumentalist and producer – that made Boston one of the most successful rock acts of all time. Equally, it’s his meticulous work ethic and pure artistic sensibility that has made Scholz a maverick within the music industry.

What he achieved with the first Boston album, released in 1976, was astonishing. It was created wholly by Scholz himself in his self-made basement studio, except for a singer with a million-dollar voice: Brad Delp. The record’s blend of hard rock power and rich melody would define a new genre: Adult Oriented Rock. The album became the biggest-selling debut in the entire history of American music, that record since broken only by Guns N’ Roses’ Appetite For Destruction.

For Scholz, the perfectionism that drives his creative process would prove both a blessing and a curse. In the early 80s he was sued by the band’s record company CBS for breach of contract after he’d spent five years fussing over a third Boston album. In this battle of art versus commerce, Scholz emerged victorious: the album, Third Stage, was eventually released in 1986 on a different label, MCA, and was another multimillion-selling hit. In such a long career, however, he could have done more. By working so slowly, so painstakingly, Scholz has made just six Boston albums in almost 40 years.

Of the many musicians Scholz has utilised throughout Boston’s career, Brad Delp was the best foil he ever had. The singer, who committed suicide in 2007, will always be remembered as the voice of Boston. Across the years, Delp also collaborated with another member of the band’s original line-up, guitarist Barry Goudreau, on non-Boston albums that could almost have passed for the real thing. Almost. But the Boston sound is something truly unique, and only one man can make it. This sound is so deeply embedded in American rock’n’roll culture that its influence would be heard in another era-defining anthem: Nirvana’s Smells Like Teen Spirit. It’s a sound that has sold more than 30 million Boston albums. And it’s still a thing of wonder.

During the making of his masterpiece, over five long years, Tom Scholz led a dual life. Between shifts as a design engineer for Polaroid, he’d be locked away in his home studio in Boston. “It was my escape from the world,” he said. But the music he created would find an audience of millions.

All but one track of Boston’s debut album was created in Scholz’s basement. It’s a classic, landmark album, immaculately crafted and full of great songs: Peace Of Mind, Smokin’, the epic Foreplay/Long Time and, greatest of all, More Than A Feeling, Boston’s definitive statement and one of the beautiful rock songs ever written.View Deal

This was the album that might have killed Boston. Instead it turned out to be a triumphant comeback. Following an eight-year hiatus during which Scholz was sued by CBS and later freed to sign to MCA, the band’s third album sold four million copies and yielded a US No.1 single in the soulful ballad Amanda.

Third Stage is a concept album on which Scholz contemplated the passage into adulthood – the third stage of life. Cool The Engines is its blazing hard rock number; My Destination is a reprise of Amanda on which Brad Delp reached for the stars; and to finish there’s Can’tcha Say/Still In Love, two great AOR songs in one. It’s deep stuff.View Deal

It says a lot about Tom Scholz that when Boston’s second album sold four million copies, he was pissed off. The first album had sold twice as many. But Scholz’s main concern wasn’t money – it was art. As he later said of Don’t Look Back: “In my opinion, it was released before it was complete.”

To a point he was right. But although Don’t Look Back fell short of that debut, it was still a great record. The title track is a glorious, revving rock anthem; A Man I’ll Never Be an existentialist power ballad of monumental proportions; Feelin’ Satisfied a grooving hard rocker; Used To Bad News a bittersweet pop song.View Deal

There was a gap of eight years between Boston’s third album and this. And in that time rock music had gone through seismic changes with the arrival of grunge, then nu metal. Tom Scholz simply carried on regardless.

Walk On had that vintage Boston sound. Brad Delp was absent (he quit three times over the years). In a surprise move, Scholz brought in Fran Cosmo, who had sung with former Boston guitarist Barry Goudreau. Cosmo was the next best thing to Delp, brilliant on the album’s best tracks: I Need Your Love and Livin’ For You – the latter Boston’s greatest ballad. Surprisingly, Walk On was a US Top 10 hit.View Deal

At a time when Boston’s career was on hold due to the power struggle between Scholz and CBS, guitarist Barry Goudreau made a solo album that sounded like a Boston album.

Goudreau’s album also featured Boston’s Brad Delp and drummer Sib Hashian. While the little-known Fran Cosmo was the principal vocalist, it was Delp who sang lead on standout track Dreams. And throughout there was what a CBS ad described as “the guitar sound heard on twelve million Boston albums”.

Barry Goudreau is the best Boston album Tom Scholz never made. After it’s release, Goudreau was fired from the band.View Deal

Three years after Barry Goudreau was kicked out of Boston, the guitarist returned with a new group, Orion The Hunter, fronted by Fran Cosmo, the singer on Goudreau’s 1980 solo album. The sole album they made sold bugger all, but it’s a minor masterpiece of high-class 80s AOR.

With Goudreau recreating Boston’s layered guitar sound, Cosmo singing high like Brad Delp, and Delp harmonising on three tracks, this was a Tom Scholz nightmare and a melodic rock fan’s dream. All Those Years and So You Ran are monumental AOR tracks, and proof that Goudreau had a little of Scholz’s genius.

Five years after Third Stage and three years before Scholz would complete Walk On, two veterans of Boston’s glory years launched a new band, RTZ. Brad Delp had worked with Barry Goudreau on other projects, but in RTZ they were co-leaders of the group.

Return To Zero was a fine record. Inevitably there were echoes of Boston, in the big rock sound of There’s Another Side and the ballad Until Your Love Comes Back Around, on which Delp delivered one of his very best performances. The latter was also a US Top 30 hit. But the album faded quickly, and when Delp later rejoined Boston for their Walk On tour, it was curtains for the short-lived RTZ.View Deal

Scholz has always worked at a glacial pace. But now, in his mid-60s, he’s slower than ever. Boston’s most recent album, Life Love & Hope, was 11 years in the making. Such tardiness is all the more remarkable given that four tracks on this album were originally recorded for the preceding Corporate America.

Life Love & Hope is patchy. Having several lead vocalists makes it incohesive. But when it’s good, it’s very good: the title track and Heaven On Earth are quintessential Boston anthems. And, poignantly, there are three songs featuring Delp. The best of them, Sail Away, is a hymn to the victims of Hurricane Katrina, and a fitting epitaph for the singer.View Deal

The last full album that Brad Delp made was another collaboration with Barry Goudreau. When it was released it slipped under the radar. Only after the singer’s death in 2007 did it take on a greater significance.

It was a low-key project, recorded at Goudreau’s home studio. The music was also made to a smaller scale – opener What You Leave Behind is like Boston minus the big-production and massed guitars. Other songs, such as My One True Love, are reminiscent of Delp’s first love, The Beatles. And for all that Brad Delp went through, the magic in his voice never left him.View Deal

With Delp returning to share lead vocals with Fran Cosmo, Corporate America, Boston’s fifth album, should have been something special. For Scholz, however, it was “a disaster”. While making it he was less of a control freak, allowing new band member Anthony Cosmo, Fran’s son, to write three songs. Scholz called it “an experiment that didn’t work”.

It wasn’t all rubbish. The title track had a heavy, contemporary edge. Didn’t Mean To Fall In Love, a beautiful song, was revived on Life Love & Hope. But as a whole, Corporate America sucked. “That,” Scholz said, “is one album that I don’t listen to.”View Deal