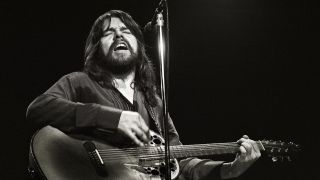 A few minutes into ‘Live’ Bullet, the 1976 live album that first brought Bob Seger national acclaim in the US, the singer addresses his home-town audience. “I was reading Rolling Stone, where they said Detroit audiences are the greatest rock’n’roll audiences in the world,” he proclaims. There’s a pause, then: “Shit! I’ve known that for ten years!”

It wasn’t just another crowd-pleasing platitude. Seger really meant it. For all the eventual success ‘Live’ Bullet brought Seger, a series of false starts and bad breaks meant it had been a decade-long battle to get noticed outside the Motor City. In 1967 his single Heavy Music sold more than 60,000 copies in Detroit alone and threatened to break out nationally but his label, Cameo/Parkway, went bust and distribution collapsed. It got so bad that, after 1969’s half-hearted Noah album, a frustrated Seger considered enrolling in college to study criminology. The follow-up album, Brand New Morning, was an introspective, acoustic collection that ended his first stint at Capitol Records. “Everyone has down periods,” Seger said in 1977. “The acoustic album was the depths for me.”

Thankfully it got better. By 1973, Seger had brought on board most of the musicians who would form the Silver Bullet Band and provide a formidable backing for whichever direction he took. They could burn like the MC5, funk like the JBs, blast gleefully through Chuck Berry-style rockers, or provide a suitably wistful backing for Bob’s many ballads. For while Seger has been unfairly maligned as a meat-and-potatoes rocker by some, it’s his strengths as a balladeer that truly mark him out as unique. All his best albums are dominated by aching, romantic, coming-of-age songs, and it was anthems such as We Got Tonight and Night Moves that really connected with his audience. Indeed fellow Midwesterner Prince was inspired to write Purple Rain after becoming fascinated by the hold Seger’s power ballads had over arena crowds.

Seger released more albums in the 70s than he has in the 35 years since. And while his more recent recordings might not flame with the same intensity of some of his earlier landmarks, he has aged with a great deal of grace. He has hinted that last year’s Ride Out album – featuring another great ballad, You Take Me In – might be his last.

Recorded at the 12,000-seat Cobo Hall in Detroit at a time when Seger was struggling to fill club venues in other towns, ‘Live’ Bullet brings together tracks from 1975’s Beautiful Loser with a smattering of earlier highlights, to devastating effect. Turn The Page, just one highlight, with its haunting sax, is stunning.

There may be slicker, better-recorded versions of these songs on other albums, but none capture the near-hysteria caused by a hometown show by the Silver Bullet Band at their intense, electrifying peak. This is the album that let the world outside Detroit know they were late to the party but was also forgiving enough to invite them in.

Bolstered by the success of ‘Live’ Bullet and renewed backing from Capitol Records, Seger recorded the album that would make his career. The Silver Bullet band provided power on Rock And Roll Never Forgets and The Fire Down Below, while the Muscle Shoals rhythm section bestowed grace on the poignant ode to Ann Arbor, Mainstreet.

It was the title track that gave Seger a national audience in the US and made him a star. Inspired by the film American Graffiti, Kris Kristofferson’s Me And Bobby McGee and Bruce Springsteen’s Jungleland, he worked on the song for six months, knowing it had to be perfect. “I wrote my brains out,” he said later.

Released on Palladium Records (a Detroit label started by Seger’s manager, Punch Andrews), Back In ‘72 includes two tracks that would become better-known covered by others: Rosalie was recorded by Thin Lizzy two years later, while Turn The Page was a hit for Metallica in 1998.

Those two alone are worth the price of admission, but covers of Free’s The Stealer, Gregg Allman’s Midnight Rider and Van Morrison’s I’ve Been Working are all solid, and Seger’s ballad So I Wrote You A Song clearly points in the right direction. Unhappy with the sound of his voice, Seger has since disowned the album, and it’s never been reissued.

The singer was unsure about the plaintive title track of Beautiful Loser (billed as a Seger solo album) until he played it to Eagles guitarist Glenn Frey (they’d dropped acid together in the 60s, and a pre-fame Frey sang on Seger’s 1969 nearly-hit Ramblin’ Gamblin’ Man). Frey convinced Seger to persevere, giving him the confidence to include more contemplative songs alongside the rockers, and the gorgeous Jody Girl plus Travelin’ Man, Momma, Sailing Nights and Fine Memory made it six slower songs on a nine-track album. Ballast was provided by the up-tempo Katmandu and a snarling, one-take cut of Nutbush City Limits.

The title refers to Seger’s discomfort with his new-found fame, but the album features two of Seger’s most fearless songs: Hollywood Nights, despite its theme of innocence abroad, is a ferocious, adrenalin-fuelled rush; We Got Tonight is the polar opposite, an achingly tender ballad that was later covered by artists as disparate as Shirley Bassey, Richie Havens, Barry Manilow and Jeff Healey.

Old Time Rock & Roll – used in the iconic Tom Cruise dancing scene in Risky Business, and the second-most-played single on American jukeboxes ever (behind Patsy Cline’s Crazy) – was added almost as an afterthought.

After the overtly commercial and critically damned Against The Wind (Seger’s only US No.1 album), The Distance was an unequivocal return to form. It’s a loosely themed concept album about relationships, inspired by the Woody Allen film Annie Hall.

House Behind A House is the album’s only moment of real weakness. Even Now is a successful attempt to repeat the Hollywood Nights formula, while Shame On The Moon, Coming Home and Roll Me Away are all Seger at his very best. The latter is one of the greatest evocations of man, motorcycle and the freedom of the highway ever committed to vinyl.

There’s plenty of talent on show on Seger’s debut album – credited to the Bob Seger System – even if it’s matched by a curious lack of focus. The band try their hand at West Coast hippie psychedelia on White Wall and Gone, both of which are as awkward as the similarly disjointed electric folk of Train Man.

But when it works, it really works. The title track is an immense, powerful, organ-driven shuffle, while 2 + 2 = ? is one of the great Vietnam protest songs, every bit as furious as Creedence’s Fortunate Son, and features a bass line that would later inspire the White Stripes’ Seven Nation Army.

Housed in a perplexingly rotten cover, the first great Seger album arrived a little less than a year after his worst, Noah.

Mongrel is Seger at his most ferocious, and Evil Edna, Highway Child and Teachin’ Blues are among his fieriest performances.The swaggering garage classic Lucifer is an absolute highlight, as is an unhinged cover of River Deep Mountain High, which really isn’t the kind of thing you attempt unless every single cylinder is firing perfectly. From a historical perspective the most interesting track is perhaps Big River, a mid-tempo ballad that eerily predicts the sound that would bring Seger so much success on later songs such as Night Moves.

Although the album is credited to Bob Seger alone, the reverse side of the sleeve includes the first mention of the Silver Bullet Band – out of the way beside the copyright information.

It opens with a pulverising stomp through the Chuck Berryish Get Out Of Denver (later covered by Dr Feelgood and Dave Edmunds, among others). The song wasn’t autobiographical: “‘Albuquerque’ didn’t fit,” Seger said. Need Ya finds Bob doing his best Rod Stewart impression, Cross Of Gold sounds like a forgotten highlight from MC5’s Back In The USA, U.M.C. (Upper Middle Class) displays a gift for savage social satire, and 20 Years From Now is genuinely lovely.

The second Bob Seger System LP is one of the most mysterious albums recorded by any major artist. Seger takes a back seat while another band member, the previously and subsequently unknown Tom Neme, contributes much of the material and sings lead on a series of flimsy pop-garage makeweights.

The album is a mess, and the nadir is reached with the wretched Cat, a startling, avant-garde hippie recital featuring six minutes of metallic percussion and aimless grunting. The urgent Death Row, a leftover from the Ramblin’ Gamblin’ Man sessions, is head and shoulders above everything else, but really only serves to highlight the album’s shortcomings.

The Bob Seger tracks you need to hear.

Get Out Of Denver