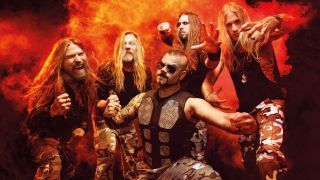 Even though we pushed England a lot, people haven’t really believed in us,” confesses Sabaton bassist Pär Sundström.

“Yeah, because we were ‘power metal’!” exclaims frontman Joakim Brodén, as the pair collapse into laughter.

They’re the Swedish metallers with bombastic bravado who dress head to toe in camo, sing about historic battles, and play to hundreds of thousands of fans in mainland Europe. In the UK, however, Sabaton are a Marmite band, with metallers here either loving or loathing their always grandiose and often cheesy anthems. But eight albums in, they’re finally moving up in the UK, playing London’s Brixton Academy in 2017 to a capacity of nearly 5,000. It’s taken a decade for people to catch on.

“Booking agents would say, ‘Power metal!? Pssh!’” says Joakim. “I’m not offended by it, but it gives us the wrong associations. We don’t arrange our music like traditional power metal bands. We have more in common with bands like Accept.”

“It’s exciting for us in the UK now, when people told us to just give up here,” adds Pär. “If there is a challenge handed to us, we’re happy to do it.”

Indeed, Sabaton give the impression of being a well-oiled and unshakable machine, all thanks to these two men talking to Hammer today: Joakim and Pär, the only original members of Sabaton remaining since the band’s inception in 1999.

Even without his trademark shades and faux armour stage gear, Joakim looks badass: a burly, shaven-headed tattooed bloke with a cheeky laugh and a devil-may-care attitude. Long-haired, bearded Pär is softly spoken with a gentle demeanour – and a sensible head on his shoulders. It is the way they work together that has led to Sabaton’s success: Pär handles the organisational side – they do not have a manager – and Joakim writes the music.

“It is my job to make sure there is a goal, and that we reach it,” Pär says firmly. “We’ve always been innovative, because no one has ever told us how to solve problems. So we solve them ourselves.

“It’s the story of how a lot of things in Sabaton evolved,” he explains. “We have a Sabaton cruise: it started with a problem. It was too expensive to get from Sweden to Finland with the production, people and buses. So instead of booking space on the ferry, we booked the entire ferry and made something good out of it. Instead of a release party in a club, we made it into a one-day festival, which evolved into a three-day festival, which is now Sabaton Open Air. So we solve a problem, but not simply. We go all the way.”

Interestingly enough, this approach to tackling bumps in the road also led to Sabaton’s trademark lyrics, which centre around historical wars and battles. Latest album The Last Stand continues in this vein, focusing on defining face-offs from the past 2,500 years.

“It may seem like we’re morbidly interested in war!” laughs Joakim, “but lyrics were a necessary evil. We were writing lyrics for the song that eventually became Primo Victoria [on their debut album of the same name]. We were listening to the music for it, and we thought, ‘We can’t just sing about shagging women and drinking beer, ’cause the music has such a big sound!’ So it ended up being about D-Day. All of a sudden, we found it interesting to write lyrics. So we thought, ‘Maybe we should make the whole album about war!’ It seems like we had a grand master plan, but we didn’t.”

Perhaps they’re not the war fanatics they’re made out to be… but they must be more interested in it than your average Joe to keep the theme going for eight albums?

“For me, I find fact more interesting than fiction,” explains Joakim. “We wanna tell good stories.”

“I do not think there are people on this Earth who have never seen war or something similar,” adds Pär. “And unfortunately, we’re gonna see that until the end of humanity. So everybody can relate.”

Sometimes, the fans even help them out: Pär has a “secret library” full of letters he’s received suggesting subject matter for new songs, which helps to broaden the band’s knowledge, and give voices to historical events that people might be less aware of.

“Every country has their own history,” explains Joakim. “Things that are common in, say, the Czech Republic, are almost unheard of in the rest of the world. Or the countries that ended up behind the Iron Curtain – their history was squashed away.”

Are they trying to educate with their lyrics?

“We’re metalheads, not history professors!” laughs Joakim. “If somebody discovers something, that’s great, but it’s not our intention. There are so many fantastic stories in the past… why make up new ones?”

Over the years, Sabaton have come under fire for their lyrics’ controversial subject matter – like the song The Final Solution, which deals with the Holocaust – and have even been accused of having questionable views themselves…

“Nobody would ask Stephen Spielberg if he was a Nazi because he made a movie about the Holocaust!” says Joakim with exasperation. “It’s storytelling. If someone has a problem with what we sing about, they should talk to the leaders who made this shit happen many years ago.”

“It’s totally understandable that you can misunderstand Sabaton if you hear a bit of a song and don’t know where it comes from,” Pär says calmly. “It was harder in the beginning. Our first album was denied release in Germany because it contained the word ‘Nazi’. They thought it was neo-Nazi propaganda! When we sent the lyrics, they said, ‘This is actually quite interesting’ and we were able to release it!”

But while they are happy to tell stories from the past, they would never tackle anything from the present, for fear of misunderstanding the nuances of a situation.

“In every country, the media has its own agenda,” adds Pär.

“I couldn’t care less about politics,” Joakim asserts. “I’ve never voted in my life. The more I learn about history, the less important the ‘important’ issues of today become. People ask us about war today: ‘There’s so much happening!’ they say. Nope! People will not look back at this as a time of conflict.”

Some would argue against that, given recent tragedies like Syria…

“I mean, I’m not downplaying what’s happening, but on a global scale, when did we last have such a peaceful time?” Joakim says.

“Look at this country [England] 70 years ago…” adds Pär with a shrug.

There’s no doubt that Sabaton’s lyrics have attracted plenty of attention – more so from those who actually dislike their music – but it’s not what’s made them so popular, not what’s helped them become one of Europe’s biggest heavy metal bands, and not what’s taking them to Brixton. It’s their catchy songs and boisterous live performances that have gained them their diehard following.

The band are a firecracking live powerhouse. All five members, decked out in camo, leap and lunge across a stage that usually includes fire, a tank (or two) and plenty of ramps for running across, while Joakim grins and jests with the audience. They are regulars at Bloodstock, last year threatening to upstage Friday headliners Trivium. Sure, they sing about serious subjects, but onstage, it’s all about fun. As if to indicate this, they blast Europe’s The Final Countdown from the speakers before they arrive onstage.

“We’ve been playing that as an introduction for years!” laughs Pär. “We all grew up with it. And it represents something as well: a dream of the biggest heavy metal hit out of Sweden ever. It’s a guideline of where we should aim.”

“Also, we started out doing a lot of support shows and festivals,” Joakim adds, “and when you’re a smaller band, and no one knows you, if you start with your own intro and go onstage people might not notice, but when you’re cranking out The Final Countdown, people get the message: something is coming, ha ha ha!”

While their sets open with Europe, they always finish with one of the few songs in their repertoire that aren’t about historical war: Metal Machine or Metal Crüe, which are tributes to the heavy metal greats like Judas Priest and Kiss, with lyrics like: ‘When the priest killed a maiden in the metal church.’

At the end of the day, these are the songs that represent what Sabaton are truly about…

“They are about the core of Sabaton,” Pär says. “This is why we usually end the show with Metal Crüe – after we’ve been singing about war, it’s time to take out who we really are, what all the fans are really there for. They’re not here for a history lesson; they’re here for heavy metal.”

“We take our music seriously, but we do not take ourselves seriously,” smiles Joakim. And that, right there, is exactly why Sabaton have conquered the heavy metal ranks.

War Is The Answer!

Sabaton might sing about battles, but how much do they really know about the ones on their new album? We put their knowledge to the test…

(Battle Of Thermopylae, 480BC, Greece)

Who led the Greeks against the Persians?

Joakim: “King Leonidas! I think that this is the mother of all last stands, being so long back and so iconic. Legend says it was a million Persians against a much smaller number of Greeks. The fight was not for survival, which was impressive, I think. The fight was for freedom.”

The lost Battalion were trapped by German forces during World War I. Who were they?

Joakim: “Division American unit… the exact number is the 77th division. There were only about 575 men inside the German enclave, and it had been almost a week, and they had no means of communication and were being attacked by their own, so they had to send away carrier pigeons with messages: ‘For Heaven’s sake, you’re shooting your own, please stop it!’”

Robert The Bruce took back the occupied Stirling Castle from King Edward II’s forces, in the first war of Scottish independence. In What year did it happen?

Par: “1314! It was said that this was one of the last occupied castles of Scotland at this time. The song itself is musically stepping outside of what Sabaton usually is. When we were writing the lyrics for it, we needed something to add to the atmosphere. That’s where the Scottish bagpipes came in…”

It was the final battle in a rebellion of disaffected samurai, led by Saigo Takamori (dubbed
‘the last samurai’) against the new Japanese imperial government. But what was the name of the rebellion?

Par: “The Satsuma Rebellion was one of the first ideas we had in mind for the album. It’s also why we have Samurai
on the album’s cover. We had a few ideas [for songs] which we decided on and sent them to our designer for
the album artwork [for The Last Stand]. There’s a Spartan, a winged hussar and American soldiers, too.”

The Pope’s Swiss Guards held off troops loyal to the Habsburgs, the royal German family. But what was the name of the Pope in question?

Sabaton say they’re not obsessed with war, but they sure do know their shit. If this whole band thing doesn’t work out, they’ll have fine careers as history lecturers ahead of them.