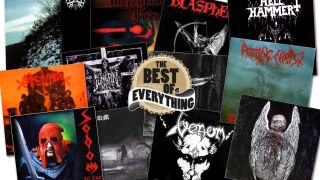 A.A. Nemtheanga has been making extreme sounds since he joined Primordial in 1991. Growing up in Dublin in the 80s, he says he looked for a “soundtrack to an aggressive city. I was more drawn to the primal, harsh sounding stuff than Testament or Bay Area thrash. I always preferred Possessed or Sodom, early Kreator,” he explains.

While Scandinavia is a big player in the black metal scene, he’s keen to stress that it isn’t the epicentre of the sound. “For anyone who grew up presuming Norwegian black metal was black metal, it’s not true,” he says.

“There are South American bands, and bands from behind the Iron Curtain who had to build their own instruments and amps and record through two-track tape machines just to make themselves heard.

"The first time Sepultura played in Ireland in 1990, it was weird, it was like people were recognising them as one of their own from a struggling country. So I guess [Primordial] identify with bands from those far-flung places because we were isolated as well.”

By ‘isolated’, he means one of Ireland’s only extreme metal acts. When he joined Primordial aged 16, it was as a reaction to a metal scene he thought was going soft.

“We believed metal had to have that sympathy for the devil and primal urge to it, and it didn’t; punk influence was coming into death metal and bands were singing about the environment and stuff. It just left us cold, and we wanted to bring it back to studs and bullets and Satan. It was really unpopular in Dublin, because we’re innately conservative.”

Fans must have been hiding somewhere, though, because Primordial are still going fifteen years later. We asked HIM to choose 12 songs from the black metal realm that have inspired him throughout his career – here are his picks.

Nemtheanga: “This is pretty inspired by Venom, and probably more extreme-sounding than anything that’s out now. It has the words ‘black metal is the game I play’ in the lyrics. For me, it’s really vicious, violent and extreme, and definitely not punk. I was first drawn to the sound for the violence of it.”

“They had an album called Black Metal. It’s too easy for people who didn’t grow up at the time to go, ‘Oh, it’s not black metal, it doesn’t sound like Mayhem,’ but then if you listen to [Mayhem’s EP] Deathcrush, it has a Venom cover. They’re the first black metal band, it’s as simple as that. This is a final album song on Black Metal which led into At War With Satan, and there’s something about the riff and the tempo that just gets me.”

“This has got the spiritual content if you want to call it that – the Satanic idealism. We can argue about the intent of all that kind of thing, but I think the proof is that King Diamond is still around. In this context, the devil is part of the language of heavy metal. Sympathy for the devil; that’s what early black metal in its infancy advocated.

"Whether we believe in the devil as a real entity – personally not, it’s just a symbolic identification with a character that represents freedom and liberty – I think that feeling of recklessness is imbued in that old 80s metal.”

“This primitive, knuckle-dragging, monotonal dirge is the best thing on earth. The proof is that Tom is still going in Tryptikon, which has the same essence as you can find in Hellhammer. I couldn’t make a top 10 of what I consider to be black metal without putting Hellhammer in it.”

“Burzum is arguably the greatest Norwegian black metal band of all time. Those first four albums are absolutely incredible. What Varg represents now is of no interest to me. If you don’t listen to the first four Burzum albums then I think you’re missing out. When I first heard it, it was a total game changer.

"I got a cassette of it before the album came out and I’d never heard anything like it – such a strange, sloppy, dissonant guitar picking and hysterical vocals. It really was like a fucking bomb had dropped on the scene and you’ve got to credit him with that.”

Rotting Christ – The Fourth Knight Of Revelation (Thy Mighty Contract, 1993)

“Rotting Christ is probably my favourite band from the 90s. It’s a common misconception that the scene in the early 90s just revolved around Scandinavia, when there were bands from South America, from the Czech Republic, from Canada, and of course Greece, where Rotting Christ are from. Anybody who understood the scene at the time understood it was a groundswell movement that was happening all over the world.”

“It’s really primitive and bestial sounding, similar to Hellhammer, but these guys are Canadian black metal skinheads. Anybody who’s seen them live in the last couple of years can This is much more my kind of stuff than the technically gifted, virtuoso symphonic stuff from the 90s – to me, that’s like the musical equivalent of the Brothers In Arms video by Dire Straits, it’s just horrendously dated. But violence and aggression don’t date.”

“Some of the first blast beats you could ever hear are on this record. It’s insane, crazy reckless metal from this really boiling 80s South American scene. It still sounds really extreme now, 30 years later.

"Dublin in ‘87 was more like second world than third world. Every weekend, there’d be fights, and going to gigs was quite a violent experience. I’m sure it wasn’t the same as growing up in the streets of Sao Paulo but it definitely was a rough place. What spoke to us was the pursuit of finding the most violent, extreme and harsh sounding stuff. A lot of Europeans look back at the South American scene as being a really honest, pure form of expression.”

“I had to pick something modern. There’s still a lot of incredible black metal being made, but Funeral Mist are ratcheting up things another level. It’s almost suffocatingly harsh, and all made by one guy as well – Daniel Rosten, the singer of Marduk, who became a really good friend of mine. I got an insight into his mindset and how he made the music which made me appreciate it even more. Salvation is arguably the greatest black metal album since the year 2000.”

“I think these are one of the most influential black metal bands of the last fifteen years. They’re like the high watermark for modern black metal. Contrary to some of the bands I mentioned earlier like Venom and Hellhammer, Deathspell Omega have this incredibly intricate and dissonant, almost jazz-like feeling to their music.

"But people don’t know who they are, they don’t do press, they don’t do interviews, they’ve managed to keep the whole thing quite secret, but raise the bar to a ridiculous level musically. They’ve probably been quite an influence on the hipster black metal scene who’ve wanted to take some of their mannerisms, but not the evil intent. You can hear them in Deafheaven and lots of other bands like that.”

“These guys are the most popular black metal band on the planet right now. I mean that in a sort of underground sense, but they’re pulling in the numbers when they play live. They have no press, no ads, nothing, but they’re selling out everywhere.

"In contrast to Deathspell Omega, they have a much more considered musical approach, it’s very tight, very thought out harmonies, made by people with some attention to detail behind it. There’s elements of Dissection and early 90s Swedish melodic harmony picking, but it keeps the essence of evil. They’re Polish, and I’d recommend anyone check them out.”

“These guys are very interesting band from the Czech Republic. I think it’s important to recognise that there was black metal in the most obscure and difficult places. This album was a huge influence on Emperor and some of the Norwegian black metal that came out afterwards.

"I don’t like the word orchestral because I think it’s kind of a dirty word, but they’re epic, kind of inspired by Bathory. I included these along with Sacofago as a bridge if people want to discover some of the stuff that’s off the beaten track. This is a good introduction.”

Primordial will be playing this year's Damnation Festival in Leeds, UK on November 2.