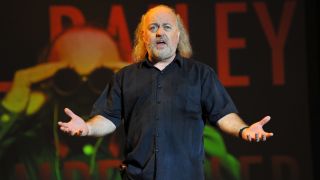 “I got this through the post! From Peter Gabriel himself!” says Bill Bailey as he bangs away on a strange looking woodwind instrument. Not for the first time during our time together day, Bailey is excited. The comedian, actor and self-professed fan of all things rock and metal has invited us to his office space to talk about his upcoming tour. But so far the only tour we are getting is of the many flights of fancy that make him so loved but our community.

“Yeah, he sent it to me after I introduced him at the Prog awards a couple of years ago,” he continues. “I think he thought that these sort of things could get a bit stuffy and a bit serious so he wanted me to give him this lifetime achievement award. I wrote this speech and it was all very respectful, because I’m a huge fan. Then I thought… ‘That isn’t what he wants at all! He wants someone to take the piss a little bit!’ So I scrapped it and made this made one when I refer to him as the founder of the Uzbek nose flute collective and all these world music jokes, which he took in very good heart, but it was quite intimidating because he’s very enigmatic and talented and quite imposing… So that was a bit of a moment! And I’m glad that we keep in contact, albeit communicating through the medium of log drum.”

Bailey puts the sticks to the instrument down, before heading off again like an excitable child grabbing everything in his extensive personal collection – from a Toblerone bearing his name to the Metal Hammer Golden God he received in 2012 for embodying The Spirit Of Hammer. “The sword is a bit wonky,” he tells us, wiggling the top. “If you could send someone round…”

We’ll get on it, Bill. First though, if we can maintain his attention long enough, there are live dates for us to talk about. A 39-date trek across the UK with his new show Limboland.

“I’m just getting ready to do the tour. I’m doing some warm up shows and then I’m doing the tour itself and then I’ll be doing a West End run. And after that I’m going to Europe.” He tells us, before, rather predictably, heading off on a tangent of his very own.

“I’m hopefully, fingers crossed, going to chase down some of these Scando Satanists! I wanna go hang out with them. You know the last time I went to Sweden I hung out with Opeth, hung out with Mikael, and they’re brilliant! They’ve got a fantastic attitude to music, and life generally, it’s just beautiful. Scandinavia is just a very inspirational place, there’s so much mystical metal… [Opeth album] Pale Communion had that feeling of going back to your pastoral roots of Scandinavia. Very ethereal.”

And, although we’re afraid to ask knowing that the answer will take us in many differing directions, what is Limboland exactly?

“Well the show is about the last year or so, and all the things that didn’t really come off,” Bill explains. “I had many plans that didn’t quite come together and, just daily frustrations, things that don’t work, bits of life that piss you off…”

It’s quite a trend in stand-up comedy now to create a show with a narrative line. How difficult is that to stick to once you’ve made an idea?

“Well, what a lot of people tend to do is come up with a title and then crowbar ideas I around it,” he begins. “But then you’re stuck with it, so I tend to just write jokes and then see what similarities occur out of it. By the end of writing the show you start to look at the gags and you can see that stuff fits in around a certain theme… and that it wasn’t just empty blathering! Ha ha!”

Before we go we have to ask the man that counts both Peter Gabriel and Opeth, as well as Mastodon, as close personal friends – what is Bill currently listening to?

“Oh! Right!” he shouts before excitedly jumping up once again and heading over to his stereo. “I am listening to this; Enslaved’s In Times on vinyl. And it’s bloody great! So I’m discovering that all over again. Actually playing it on vinyl is really good fun. And somebody sent me an album… (his eyes light up) BEHEMOTH! The Satanist! Yes! And I’ll tell you what, for Satanists they can certainly pen a good tune!”

A stellar choice from a comedian who keeps proving himself to be one of our very own. We’ll send someone over to fix that award, post-haste.