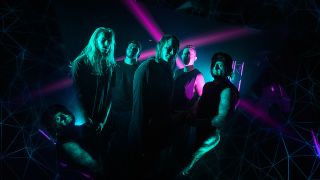 Brisbane’s technically-minded brutes As Paradise Falls are premiering their new album Digital Ritual exclusively with Metal Hammer. Combining the most dextrous and heaviest elements from the worlds of djent and deathcore, their latest record is an expansive slamfest full of giant choruses and circle pit bait. Don’t believe us? Check it out below!

The record’s concept is tied closely to the idea of technology not just controlling but ruining our lives, with any idea of privacy and self thrown out of the window at the touch of a button. To dig deeper into the stories behind the songs, we caught up with vocalist Shaun Coar for a track-by-track rundown of Digital Ritual.

“The concept of the album as a whole is how we, as people in the modern western world, are living an almost symbiotic relationship with digital technology. For some, it’s the first thing we see when we wake up in the morning and the last thing we see when we go to sleep. Digital technology has immense benefits, especially with the massive progress it has made in the last decade alone. But the question is – are all the changes for the better? Through the songs on Digital Ritual, As Paradise Falls explore parts of us we may have left behind and some dark things we have created to fill the void in this technology-ridden world.”

“For me, the digital landscape can be explained in one word: Chaos! Millions of different opinions swimming around, thrashing against each other like competing viruses for a viable host. People searching for a friendly ear to accept them and make them feel valid. But sometimes within chaos we find a natural order, a balance. Maybe to gain control of your life you must first let go. Maybe we are never in control.”

“The song StarBlind is meant to explore the culture of celebrity in western society. In recent years, thanks to the advent of social media, the traditional model of what ‘famous’ is or was has changed by epidemic proportions. The idea of fame hasn’t always been seen as such a high goal to so many people. But what was a sometimes blurry line between fame and infamy is now pretty indistinguishable by people who seek validation in a world where it’s so hard to find value in themselves. In the current modern digital culture, we need to value substance more than ever.”

“As time goes on and with technology expanding at an exponential rate, so too is our data needs. According to Cisco.com, global mobile data traffic has expanded 18-fold in the last five years alone. So often when we as people find something we really like, we consume it until we get to the point where it is no longer sustainable. Is it our nature in modern western society to consume everything until nothing is left?”

“The phrase ‘The Devil is in the detail’ has never been more appropriate than in today’s technological world. If you’ve ever clicked ‘I accept’ on any online form without reading the terms and conditions, this song is for you. In fact it’s quite rare to find someone who knows their iOS or Android software update contract back to front because frankly who has the time? Ignorance is not only bliss but also god-damn convenient. And it’s safe to say there is a large majority of people that would gladly sacrifice some privacy for the latest toys or update.”

Glory To The Server

“If the latest US presidential election has taught us anything, it is that spinning things around to suit your narrative works! Embellish, exaggerate or downright lie if you have to, just say it louder than anybody else and say it prouder than anybody else. Of course this isn’t really news – or fake news for that matter – to anyone that follows politics. But the newest element in that particular election is that it played itself out largely on social media, more than any other election in the history of elections ever. Welcome to the show.”

“This song is an observation on online activism. The world is a crazy place with a lot of wrong things happening inside of it. And whilst sharing articles exposing travesties may draw attention and slow things down temporarily, it will never actually deal with problem permanently.”

“This song is explores communication in the digital age and how an refreshing honest, face-to-face conversation can be. So many interactions between friends occur online. Sometimes we could go months without even hearing their voices, let alone seeing them face-to-face. When was the last time you misinterpreted a text as something containing malice? Ever send a message only to have it seen and been left waiting for a reply? We place so many rules and etiquette on our relationships to satisfy our own egos. This can create problems that may not actually be there. Communication online lives in a strange duality of being so vital at times, whilst being flippantly disregarded the minute it doesn’t meet your interests.”

“Hysteria deals with the idea of modern day propaganda. In school when learning about propaganda a lot of textbooks referred to old WW1 and WW2 enlistment posters. The premise of the posters was pretty obvious in their purpose. In the modern digital era propaganda is far more sophisticated. Distinguishing what is real and what is fake or augmented is very hard and can be impossible to confirm that it still exists.”

“Everyone has a dark side. Another part of themselves they would rather not let the world see. But sometimes, especially on the web, if you look hard enough the signs are there. With endless temptation only a click away it’s only too easy to fall from pride to disgrace. This song explores the urge to sink into the void.”

Captive To The Creation

“Strip everything away from modern day man and what do you have? Take everything away and what is left of our primal beginnings? Would we be able to survive on our own or are we held captive to the creations that make our lives so comfortable?”

Digital Ritual is out July 21 via Eclipse Records and is available to pre-order now.

Why The Voynich Code aren't just for tech-metal guitar nerds

Brutai: It's djent, but not as we know it