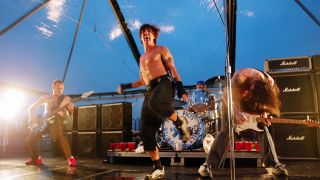 “I put in on some music to wake up to, something to get me going. Then I’ll do some stretches and go running through my neighbourhood, which is in the Hollywood Hills.

“While I’m jogging I’ll be listening to something on headphones. At the moment its mostly Van Der Graaf Generator albums such as Godbluff and Still Life, or Peter Hammill solo albums. For me that’s good running music. When I was making my latest solon album Shadows Collide With People, I was listening to Tarkus by Emerson Lake & Palmer a lot. I usually run between two and six miles each day, and my stamina is improving all the time.

“I don’t do yoga like the other guys in the Chili Peppers. I’m extremely flexible, though; I can get into the lotus position or do the splits without any pain. Yoga’s good for releasing tension, but I don’t really have any tension to release. Besides, when you’re as flexible as I am yoga is actually quite risky, because I could easily put a rib out.

“After I shower I’ll eat something. And I usually read during breakfast. The last book was Perdurabo: The Life Of Aleister Crowley. It’s a really good biography by Richard Kaczynski. It gave me a clearer idea of who Crowley was than his autobiography did, although there’s a certain amount that still confuses me.”

“There are about 10 books you have to have read to be able to understand Crowley’s language; you can’t just jump in there. He did write a book on magick [sic] which is supposedly for the layman, though. I think that’s book four.

“Lately I get more out of biographies – or at least factual stuff – than I get out of novels. Right now I’m reading a book by Iannis Xenakis, the Greek architect, mathematician and composer. I’m really into his music, and I’ve been taking some mathematics lessons for my own interest. I have a tutor who comes over, and when she’s gone I practice what she’s taught me and listen to 20th century classical music.

“They say there’s a strong link between mathematics and music, and I definitely go along with that. I believe that any music we consider good can be explained in terms of mathematics. For me, the way I apply maths to music is mostly subconscious, but now I’m trying to move that into my conscious mind. The main reason I’m taking lessons, though, is so I can understand my modular synthesiser from a deeper standpoint, and hopefully learn how to build modules myself.

“For me mathematics is fun. I like to end each day knowing that I’ve learned something new, feeling that I’ve made some kind of progress. Beyond that, most of my day is spent sitting on the couch listening to music, and if I’m interested in learning something on the guitar I’ll do so. The last song I learned by somebody else was Katmandu by Cat Stevens. I like his finger-picking on that song. The kind of thing that would constitute a breakthrough, though, would be if I wrote a new song with a chord in it that I’d never used before.

“When I’m not busy with the Chilis I’ll put together little recording projects for myself, or my friend Josh [Klinghoffer] and I will play little experimental shows at places like the Knitting Factory. It’s fun. We only rehearse the day before, and it’s very relaxed. We just start with a basic direction and see what transpires.

“I cook all my own meals. Mostly it’s vegetables, but I’m not vegetarian. There will usually be some grilled salmon or beef for protein. I steam the vegetables or roast them in olive oil. Ever since I started cooking for myself I’m reluctant to eat out, but if I have to, for a social reason, I’ll go to a local macrobiotic restaurant.

“I don’t play any sports, and I don’t have any pets. I like cats, but I’m away touring a lot so I wouldn’t be a good parent.

“Sometimes I’ll go through periods where I watch a movie, or part of a movie, each day before I go to sleep. I like Jean-Luc Godard movies, and when I was making my latest album I was watching lots of Werner Herzog’s films: The Enigma Of Kaspar Hauser is a really funny movie, Wings Of Hope is great too – that’s the documentary where Herzog takes this German woman back to where she was the sole survivor of a plane crash in the South American jungle.

“I don’t watch much TV, but my friends have turned me on to the HBO comedy series Curb Your Enthusiasm, starring Larry David, which is excellent. So many people had told me good things about it that I gave in to curiosity, and I bought it on DVD.

“One thing I collect is old Hollywood movie posters. I have a lot by Andy Warhol. It’s hard to find stuff that was done for the real early movies, but I do have some. They’re on display, I don’t have them packed away. Obviously I have a guitar collection too. If I’m sitting at home, I’m most likely to pick up one of the three Martin acoustic guitars I have which were made in the 50s. If I’m gonna pick up an electric it’s probably going to be my Fender Mustang.

“These days everybody’s so concerned with fame and money that they forget that music is infinite, and there are still plenty of great riffs to be written. You just have to enjoy it and keep things simple. When I’ve come up with things which, in retrospect, I think are good it didn’t seem like a big deal at the time. And I’m sure it was the same when Joe Perry wrote Walk This Way, or Jimmy Page wrote the riff for Whole Lotta Love.”

This was published in Classic Rock issue 67.