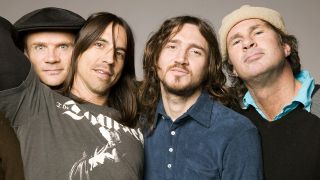 After confirming late last year that estranged guitarist John Frusciante is back in the fold, Red Hot Chili Peppers have now announced that work is underway on a new album.

Talking to Rolling Stone, drummer Chad Smith has confirmed that the band, including Frusciante – who played on the band's classic albums – are writing and recording together again. In an interview about his new art exhibition, Smith let a few details slip about the new material.

"I was given strict orders for this interview: ‘DON’T TALK ABOUT THE BAND,'" Smith tells Rolling Stone. "But, yes, John is back in the band, and everyone knows that. We’re psyched.

"The festivals are the only shows booked. For now, we’ll mostly be concentrating on new songs and writing a new record. We’re all real excited to make new music."

When asked to clarify if that means the band are in the middle of recording new music, Smith replies: "Yes. That’s all I can say."

Red Hot Chili Peppers announced that Frusciante was back in the lineup, replacing Josh Klinghoffer who has been with the band for the last decade, at the end of last year.

His return marks Frusciante’s third stint with the Chili Peppers, with the musician initially brought into the group in 1988 to replace Hillel Slovak who died earlier that year.

Frusciante played on the Chili Peppers’ breakthrough albums Mother’s Milk in 1989 and 1991’s Blood Sugar Sex Magik but was uncomfortable with being thrust into the spotlight due to the band’s ever-growing success and walked away.

He returned to the fold in 1999 for Californication and also played on By The Way and Stadium Arcadium, before departing again in 2009 to be replaced by Klinghoffer, who performed on the albums I’m With You and The Getaway.