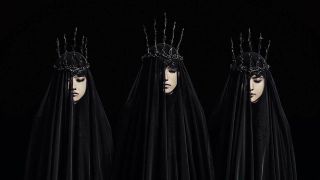 We should have seen this coming to be honest, in Metal Hammer issue 280 we talked to band leader Su-Metal about her superhero alter-ego Kon-Red. And while she decided on not having any superpowers as such, Su would “use the Japanese martial art of karate” and “say the phrase ‘Seiya!’ to get into my superhero form.” What bigger clue could we have been given? It was literally right under our noses – the word ‘seiya’ is the first word in the new song for crying out loud! But never mind that, is the song any good?

Yes. Of course it is. And before you start flexing your keyboard warrior fingers, yes it is metal. In fact, if you heard this song by accident, it would take you 34 seconds to even realise it’s Babymetal at all (because that’s when the vocals kick in). Prior to the trio’s unique voices creating that now signature sound, it’s nothing but riff and heavy kick drums backed up by juttering electronics. The Kami Band continue to keep it heavy (as they so often do) for the following four minutes with seriously headbanger friendly guitars ploughing the song ever-onward.

But let’s be honest here, this song, as with so many in Babymetal’s arsenal, is about the vocals. It’s anthemic from the beginning with Moa and Yui chanting “Seiya sessesse seiya” before Su’s ethereal, harmonious vocals soar over the top with a punching “Ossu!” from the back. Then there’s the small matter of the chorus. If you’re not sat bouncing in your chair to perhaps the most infectiously bubblegum words we’ve heard this year, then you’re hollow inside – it’s even got some big “Whoa-oh-ohs” for added fist-in-the-air fun. And on it goes.

Structurally it’s not going to keep Dillinger Escape Plan up at night, it’s pretty straight-forward, but that’s what makes it so accessible and (for so many Babymetallers out there) a gateway into the wider world of metal.

Similarly, KARATE’s lyrics go hand in hand with so many of the words written by ‘proper’ metal bands. Countless bands around the world write about defiance, standing up in the face of adversity, fighting the good fight and generally saying screw you to ‘bad people’. If you take a look at the words to KARATE it’s the exact same thing, translated into English the girls sing “Even if tears spill from our eyes, let’s confront it” and “let’s fight on even if we get sad and unable to stand up”. What’s more metal than singing about fighting over the top of killer riffs?

You can listen to the song here to make your own mind up, but this is a massive metal tune from a band that are taking metal to some of the biggest venues in the world. That should be applauded, regardless if it’s tr00 or not.

Metal Resistance is out on April 1 via earMUSIC.