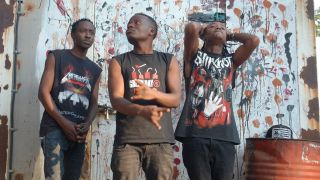 Throwing the horns: a universal language

It wasn’t until he was in imminent danger of assault that author Edward Banchs realised how provocative it was to be a heavy metal fan in Africa. Edward, a lifelong metalhead with an academic background in African history, had taken it upon himself to travel to as many countries on the continent as finances and border issues allowed, to gain an insight into how metal scenes had begun to spring up all over, and the electrifying effect they were having upon African youth. Having finished interviewing Madagascan band JonJoRomBona, they all went for a beer.

“Stephan, my translator, wanted to play some metal, and that started it,” remembers Edward [pictured left], a native of Pittsburgh, Pennsylvania. They put on Shadows Fall’s seminal thrasher The Art Of Balance, and a group of men surrounded him. “I didn’t know what was going on. I assumed they were friendly, but then I saw the look on their faces and the way the guy was grabbing my hoodie.”

Edward was wearing merch from US melodeath band Darkest Hour, adorned with a goat on the back with its arms stretched out. “For us it’s sarcastic Satanism, but as metal fans and Westerners we are used to seeing imagery like that and not blinking,” explains Edward, highlighting how a seemingly innocuous image to us can still spark conflict in a highly religious part of the world. “They thought I was there to spread Satanism.”

Hair-raising tales such as this can be found in his book, Heavy Metal Africa, which details the development of metal scenes in six African nations. There’s South Africa, with its modern mega-city of Johannesburg, still overcoming the racially divisive horrors of apartheid; Botswana, an idyllic country ravaged by the HIV/AIDS virus; Kenya, home of the Great Rift Valley, where younger generations are breaking away from tribal divisions; Madagascar, an island famous for its exotic flora and fauna but not for its profound corruption and poverty; Mauritius, an idyllic tourism hotspot where, according to local bands, the government recently tried to ban metal following drunken acts of grave desecration by local metalheads; and Zimbabwe, a formerly prosperous nation where people now live under the crippling conditions imposed by its leader, Robert Mugabe.

For Edward, a primary motivation was to highlight just how little Westerners know Africa, beyond its well-documented tragedies or clichéd cultural imagery. Many people wouldn’t even think about the existence of a metal scene. “It’s funny, because people always ask me, ‘Did you go there on a safari?’ Yeah, but for a different type of wildlife!” he laughs.

His journey details a continent caught in a tug of war between its troubled past and an ambitious present. As a genre, metal is relatively new there. Because of limitations in communications, trade embargoes and strict religious and authoritarian regimes, access was limited – but people are catching up fast.

“When I was young, I watched the [1989 horror] movie Warlock. As the credits rolled, there was a rock tune playing. I rewound and rewound the VHS, because it sounded so cool,” reminisces Herman le Roux, singer of South African rockers Juggernaught. “I tried finding albums like it, but things weren’t as easy as they are now. I didn’t know what to search for, what ‘metal’ was. When CDs became popular, I grabbed as many as I could; they all sucked. Then it happened: Metallica released …And Justice For All. I saved up like crazy, and went around the neighbourhood telling parents I was collecting money for my school’s rugby team – I was just like, ‘Fuck those jocks, I could cash in on them!’ – until I could get that CD. It still gets me every time!”

Many of the bands tell similar tales of discovery, also unifying under similar reasons why they play metal. “It is a music that encourages a strong sense of individuality,” asserts Giuseppe Sbrana, lead guitarist/ vocalist of Botswanan trad metal trio Skinflint. “It also allows us to expand as artists; it breaks stereotypes and has no boundaries.”

“It’s allowing people to create a voice of their own,” continues Edward. “Some of the musicians told me that their identities are so superficial – these ethnicities that were created. Through music, they’re realising that most of it is bullshit. That’s how Africans have lived for generations – governments putting people in different groups, because it was easier to control them. We’re so Westernised, we just think of this shit as historical, but right now there’s people still living with it. In England everyone is English, but in South Africa we don’t call them ‘South Africans’. These guys are Zulus, Xhosa, Sothos. That’s what this generation’s doing now, they’re starting to say: ‘We’re just South Africans.’”

Of course, playing metal in countries so religiously orthodox and authoritarian means that the musicians find themselves at the centre of controversy. Edward tells a story about a ship’s misplaced cargo container full of Halloween masks, which caused a Satanic panic. Sthembiso ‘Tyrant’ Kunene of corpsepainted South African black metal band Demogoroth Satanum can attest to this more than most.

“South Africa’s got a history with Satanic scares; now all those pointing fingers had something to point at,” he says. “The more we delved into this culture, the more intensity accumulated in society’s gaze. We weathered so many storms, through it all deriving inspiration, beauty and calm from the music.”

Demogoroth Satanum feature in Black Black Metal, a short documentary on the South African metal scene by filmmaker Wim Steytler, anexperience Tyrant describes as “beautiful”. It reveals the band’s small but incendiary live shows – warehouse parties where skate culture, metal, punk and hardcore mix in a potent blend of youthful rebellion. “There are no words to describe how it feels to stand in front of people, looking at the chaos unfolding. You, there, conducting it,” Tyrant says with delight. “The documentary plucked us from obscure South Africa. The world’s taking notice that there is in fact life, culture and things of interest here.”

Such passion and total commitment has begun to attract attention from the West. Photographer Frank Marshall has published images of Botswana’s cowboy metalheads, a tight-knit gang of farm workers who have adopted metal’s traditional leather look in the middle of the savannah. Given the temperature, it takes real dedication. In places of extreme poverty, it becomes a struggle to even find an instrument to play. But it is the survival of such devastation – Madagascan slums where children essentially live in open sewers and forage through bins while a political elite lives comfortably – that fuels their ire.

“Normal people react like we are the son of evil!” fumes Stephan, Edward’s translator and singer of Madagascan metalcorers Behind The Mask. “That’s why we wrote the song Who’s the Evil One? Our video can’t be played on TV, because it’s metal and it talks about our government and how they fucked us.”

These bands need metal to define themselves against corrupt, oppressive norms in a way that has not been as potent in Western metal for some time. We’ve had our battles with the mainstream, but rock and metal are no longer the bogeymen they used to be; no longer capable of challenging the status quo.

“They [the African public] have been shielded from so much,” explains Edward. “In Madagascar, for example, you have a history of Christian missionaries telling them it was bad without them making the assessment themselves.” But he believes that, given time, metal will integrate. “It’s gonna take a while,” he says. “If a rock or metal band came to prominence there, it would change. South Africa’s metal culture is a little different now, because bands have gotten positive exposure. There’s a band called Zombies Ate My Girlfriend from Cape Town that won this year’s Wacken Metal Battle, and the local newspapers were doing featurettes on them. The [metal cowboys] in Botswana have gotten a lot of international attention, and now people look at them and say, ‘There’s our rockers!’, but at first they were treated with suspicion.”

Yet although musicians are stepping into a wider world, they’re not yet bringing much of their cultural identity – only a few bands are mixing African influences into music with a heavy Western feel. Edward tells the tale of Madagascan musician Njaka, from symphonic metal band Hope Era. “He used to tour the world playing the valiha [a strung instrument made from bamboo],” he explains. “He played it for us in a cafe – everyone just shut up. It was brilliant. I asked him why he didn’t put that in his records? He said no, that the whole point of playing in metal band is to get away from tradition. I think he’ll change his mind. Someday he’ll be reminded that he’s in a unique position to be a cultural ambassador.”

It’s too easy to think of Africa in general terms, without paying attention to the diversity, the beauty and the passion rife across this continent. “I hope what people realise is that Africans are no different than we are,” affirms Edward. “Africa isn’t on another planet – it’s right here, you know?”

Botswana’s Wrust blend the infectious thrash/ groove sensibility of Chaos AD-era Sepultura with the dirtier aspects of old-school death metal. The band has begun to experiment with Setswana, a traditional style of music from their homeland, its staccato, hand-clapping, style taking their percussive assault in an intriguing new direction.

LISTEN TO: The Day Of The Sacrifice

When the beer flows and the music’s loud, everyone can agree on a band like South Africa’s Juggernaught, who peddle that good ol’ groovy Clutch style like they were born to do it. With riffs to spare and hooks so massive they can’t fail to impale you, each track tells its own sardonic tale.

Behind The Mask live in Madagascar, where the divide between rich and poor has never been worse. They use their extreme brand of crushing metalcore to rally against an oppressive political system, in a tense social climate where that takes real guts.

LISTEN TO: The Revolution

Metalcore proves popular with the younger members of Africa’s disparate, but steadily growing metal scenes. Kenya’s Last Year’s Tragedy combine uplifting messages of personal empowerment with transcendent major keys – an effective interplay of melody and brutality with a slick polish that has seen them attract a robust following.

LISTEN TO: Bury Your Fallen Dreams

Discovering extreme metal through samples used in ‘horror core’ hip hop, South Africa’s Demogoroth Satanum gazed into the abyss and saw themselves in the nothingness. Theirs is a ferocious interpretation of black metal, as spiky, ashen guitars and furious vocals suffocate within a baleful atmosphere.

LISTEN TO: The Kingdom Ov Hell

The punishing, righteously brutal grooves meted out by these South African maniacs, like Lamb Of God on steroids, made them deserved winners of last year’s Wacken Open Air Metal Battle.

These ambitious Kenyan rockers already have international gigs under their belt, and are sure to find their way into the hearts of anyone who appreciates huge, Foo Fighters-styled melodic hooks – some of which they deliver in Swahili. They address the horrors of the ivory trade on their latest album, Tusk At Hand.