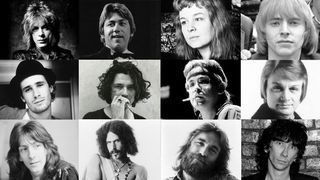 The US-born guitarist with Ozzy Osbourne’s Blizzard of Ozz died at the age of just 25 in a bizarre plane crash on March 19, 1982. On the way to a festival in Orlando, Florida, the band’s tour bus stopped in Leesburg for repairs to a faulty air-conditioning system.

Seeing an airstrip nearby, tour bus driver and ex-commercial pilot Andrew Aycock took a small plane without permission, and with Rhoads and make-up artist Rachel Youngblood on board, ‘buzzed’ the tour bus. One of the plane’s wings clipped the top of the bus and it ploughed into a garage. Everyone on board was killed instantly.

The vocalist with British blues rockers The Yardbirds was famous for co-writing Shapes Of Thing and for singing an early version of what would become the Led Zeppelin classic Dazed And Confused. Relf died in 1976 at the age of 33 when he was electrocuted in the basement of his home in London while playing an electric guitar that wasn’t properly earthed.

The fact that Relf was in poor health generally – he suffered from emphysema and asthma throughout his life – most likely contributed to his being unable to survive the shock.

A founding member of American rock band Chicago, guitarist Kath died in Woodland Hills, California at the age of 31. His preponderance for drug taking was well known. But it was another love – of guns – that got him in the end. On January 23, 1978 Kath was partying at the home of Chicago roadie Don Johnson.

Kath took an unloaded .38 revolver, out it to his head and pulled the trigger. He then moved onto a semiautomatic 9mm pistol, and believing the magazine to be empty, started the same routine. Alas, Kath had missed a single round that was in the chamber, and died instantly when the gun went off.

The English multi-instrumentalist found fame alongside Marc Bolan in Tyrannosaurus Rex, but had a well-documented history of drug abuse and was known for the ‘hilarious’ trick of spiking unsuspecting victims’ drinks with hallucinogens.

‘The Phantom Spiker’ was sacked from Tyrannosaurus Rex in 1969. By 1980 and aged 31, Took was living in Notting Hill with Valerie Billiet. The pair injected morphine, but it wasn’t this insanely dangerous practice that killed him. In fact, he asphyxiated after inhaling the cherry in a cocktail he was drinking at the time. Doh!.

The celebrated French singer who wrote Comme D’Habitude (the original version of Frank Sinatra’s My Way) was a huge star in his home country, selling a staggering 70 million albums during his career. His died at his Paris apartment on 11 March, 1978 at the age of just 39.

Francois was taking a shower when he noticed that a light fixture in the bathroom wasn’t flush on the wall. He decided to try to straighten it and as he did so – with his hands all wet – the vocalist was fatally electrocuted

Beach Boy Dennis was a super-talented musician, but an erratic human being. When he died on December 28, 1983, the 39 year old was homeless in California and plagued by addiction. Wilson got himself into a violent fight at a bar and went to hospital to get fixed up.

Hours later he discharged himself and started boozing on a friend’s yacht in Marina del Rey. He decided it would be a good idea to dive into the water to try to retrieve various bits and pieces he’d thrown overboard from his own yacht three years previously – and drowned in the attempt.

The drummer with AOR monsters Toto died at the age of 38 on August 5, 1992. The story goes that he’d been spraying insecticide in the yard of his home, suffered an allergic reaction, and died that evening in hospital. The LA County Coroner’s Office, however, stated that the cause of death was a heart attack induced by cocaine abuse.

Surviving band members and family vigorously denied this, saying that while Porcaro did use cocaine, in no way was he a heavy abuser. Guitarist Steve Lukather pointed out that Porcaro had a congenital heart condition and that two uncles died of heart disease when they were 40.

The Australian sex symbol and lead singer of INXS committed suicide on November 27, 1997 at the age of 37. The inquest into Hutchence’s death at the Ritz-Carlton Hotel in Sydney concluded that he killed himself while depressed and under the influence of alcohol and “other drugs”.

Why was he depressed? Because Hutchence was caught in the middle of a messy separation between his girlfriend Paula Yates and Bob Geldof. He was found in a kneeling position facing the door, hanged by his own snakeskin belt. Yates later claimed Hutchence hadn’t wanted to kill himself, and had died accidentally in a solitary sex game.

The Spirit guitarist was one of the faces of the late ‘60s hippy movement in the US. But despite the well-known substance abuse of the era, California died in 1997 at the age of 45 in a tragic accident.

While swimming in the Pacific Ocean on January 2 at Molokai, Hawaii, near to his mum’s house, the musician and his 12-year-old son Quinn got into difficulty when a rip current took hold. California managed to save his son by pushing him to the shore, but couldn’t save himself and drowned.

The son of ‘60s solo artist Tim Buckley, the Californian guitarist, singer and songwriter died at the age of just 30 on May 29, 1997. Already feted for his soulful writing and extraordinary, sweeping voice, Buckley made the fatal decision to go swimming wearing clothes and boots in Wolf River Harbor, a water channel in the Mississippi river near Memphis, Tennessee.

Roadie Keith Foti was on the banks when he noticed that the singer had disappeared. His body was finally found on June 4 by two locals. The autopsy established that there was no sign of either drugs or alcohol in Buckley’s system.

The guitarist with Texas thrash metallers Pantera died in the most unusual circumstances on December 8, 2004. Pantera had disbanded in 2003 and Darrell Abbott was performing live with his new act, Damageplan, at the Alrosa Villa in Columbus, Ohio.

Not long after the band had started their set a 25-year-old former marine, Nathan Gale, shot Abbott with a 9mm Beretta pistol. The guitarist took three bullets to the head and died instantly. Gale went on to kill four people in total and wound seven others before police officers shot him dead.

English cellist Mike Edwards has probably suffered the most bizarre death of any rock musician. The ELO man, who was with the band from 1972 to 1975, had moved to Devon to work on a number of projects, and to teach the cello and viol. He died on September 3, 2010 at the age of 62 on the A381 between Harbertonford and Halwell, near to his home in Totnes.

Edwards was driving a van when a cylindrical hay bale weighing 1300 pounds rolled down a hillside and collided with the vehicle. A subsequent court case ruled that two defendants were not guilty of health and safety violations.

Thai black metal outfit Surrender of Divinity’s bassist and vocalist Samong Traisattha was stabbed to death in his own home on January 8, 2014. He was 36 years old. According to the musician’s wife, a fan called Prakam Harnphanbusakorn had come round for a drink and to talk about getting some T-shirts printed.

She found her husband dead in the living room. A Facebook user then posted a photo of the body on the social networking site and wrote a confession saying they had killed the musician because he played black metal, but wasn’t a true Satanist.

The hugely respected Fairport Convention folk singer who lit up Led Zep’s Battle of Evermore wasn’t in the best of health by the time she hit 30. Known for her drinking and cocaine abuse, Denny’s behaviour had become erratic when she went on holiday with her parents and baby Georgia in March of 1978.

She fell down a staircase and hit her head on concrete. The doctor treating her prescribed a painkiller called distalgesic, which was dangerous when mixed with alcohol. On April 17 Sandy collapsed at the home of her friend Miranda Ward and died four days later in a Wimbledon hospital at the age of just 31.

The American vocalist of both The Dead Boys and Lords of the New Church had almost died on stage once, when a stunt designed to look like he was hanging himself went wrong. Bators was pronounced clinically dead for a number of minutes, but miraculously survived.

After such a lucky escape, Bators’ actually death at the age of 40 seems almost banal. He was run over by a taxi in Paris, and was sent to hospital. Bators waited for hours, but eventually left without seeing a doctor. He died in his sleep on June 4, 1990 as a result of the concussion.

The English singer songwriter’s unforgettable duet with Pogues singer Shane MacGowan on Fairytale Of New York had turned her into a household name. Sadly, she died at the age of 41 when a speedboat hit her. On December 18, 2000 MacColl was on holiday in Cozumel, Mexico with her sons and partner.

Despite being in a designated diving zone with restricted entry, a speedboat entered the area. MacColl saw that it was heading directly for her eldest son, Jamie, and managed to push him out of the way. But she was struck by the boat herself and died instantly.

Oystein Aarseth, also known as Euronymous, was a Norwegian black metal guitarist in the band Mayhem. Having got himself into a silly feud with another Norwegian black metal acolyte, Varg Vikernes, also known as Count Grisnackh, things degenerated to the point where on the night of August 10, 1993, Vikernes drove to Aarseth’s apartment in Toyengata, and knifed him outside the front door.

His body was found with 23 stab wounds – two to the head, five to the neck and 16 to the back. He was 25. Vikernes was arrested nine days later and was eventually sentenced to 21 years in prison.