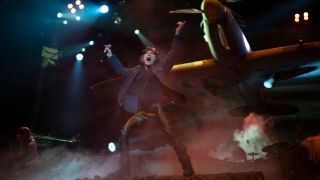 Iron Maiden have spent the summer bringing their historic and critically acclaimed Legacy Of The Beast tour across North America. As it enters its final lap, we hopped over the pond to witness the metal titans' biggest ever show touch down in Oakland, California.

Would they keep the same career-spanning setlist? Is the show really as humungous as we remember from the European run? And has Bruce Dickinson managed to work in more costume changes? Yes, yes and possibly (we lost count) is the short answer. But here’s what else we learned when The Legacy Of The Beast came to the Bay Area.

While some of Maiden’s legacy get a little more attention than others, there’s barely a part of their history that doesn’t get a look-in somewhere.

From the obvious hits like Run To The Hills, The Number Of The Beast and Hallowed Be Thy Name; to unearthed golden age numbers like Where Eagles Dare, Revelations and a mighty Flight Of Icarus; to Blaze Bayley-era classics The Clansman and Sign Of The Cross; to modern Maiden gems like The Wicker Man and For The Greater Good Of God, this is a true smorgasbord of rich pickings from right across their career. Whenever you got into Iron Maiden for the first time, there’s something here for you.

Given that The Book Of Souls era ushered in one of Maiden’s most impressive stage shows – no mean feat in itself – that the Legacy stage and set pieces completely dwarf it really is saying something.

There’s bursts of pyro, pillars of flame, props aplenty (our favourite is still Bruce’s light-up cross for, you guessed it, Sign Of The Cross) and more backing banners than they’ve ever thrown into a single show.

Oh, and did we mention the plane? Yeah, there’s still a plane. An actual Spitfire that comes flying out during Aces High. It still looks as impressive now as it did a year ago.

Bruce is having the time of his life

Seriously, has he ever been more in his element than during these shows?

While the multiple costume changes and toys he brings out are clear enough evidence of him having an absolute hoot, Bruce is on particularly rare form tonight, bantering his way through multiple songs and refusing to let an occasionally relaxed Bay Area crowd off the hook.

We counted more than six ‘Scream For Me’s by the end of the second song. He’s not letting anyone do things by halves.

Apparently, anyway. “You’ve been smoking too much of that bullshit marijuana!” he jokes at the end of Where Eagles Dare when Oakland doesn’t give him a loud enough scream.

Later on, as he introduces Clansman, he makes another snarky reference to the green stuff, stating: “Seriously, though, I know what that shit does to your brain, so when you’re writing about the show tonight, make sure you spell ‘Clansman’ with a ‘C’.”

Hot tip: if you ever see Bruce out and about, do not offer him a toke.

Every song gets a solid reception tonight, but there’s a noticeable upswing in volume when Maiden drop the likes of 2 Minutes To Midnight and especially Flight Of Icarus.

In fairness, the latter track was brought out of semi-retirement for the first time in over thirty years for the Legacy runs, so you can hardly blame people for being a little excited about it.

That said, tonight, song of the night quite possibly goes to For The Greater Good Of God – a deep A Matter Of Life And Death cut that is one of the heaviest Maiden songs ever, and that sounds absolutely epic tonight.

“New Iron Maiden songs – sooner than you think” is how Bruce tantalisingly teases the crowd as the set nears its end.

With 2020 marking five years since The Book Of Souls – as long as Maiden have ever gone between albums – we’d have reckoned you’d be fairly safe betting on a new Maiden record by the end of next year.

But by what Bruce hints at tonight, might we get a new Maiden track or two before the end of the year? We certainly fucking hope so.